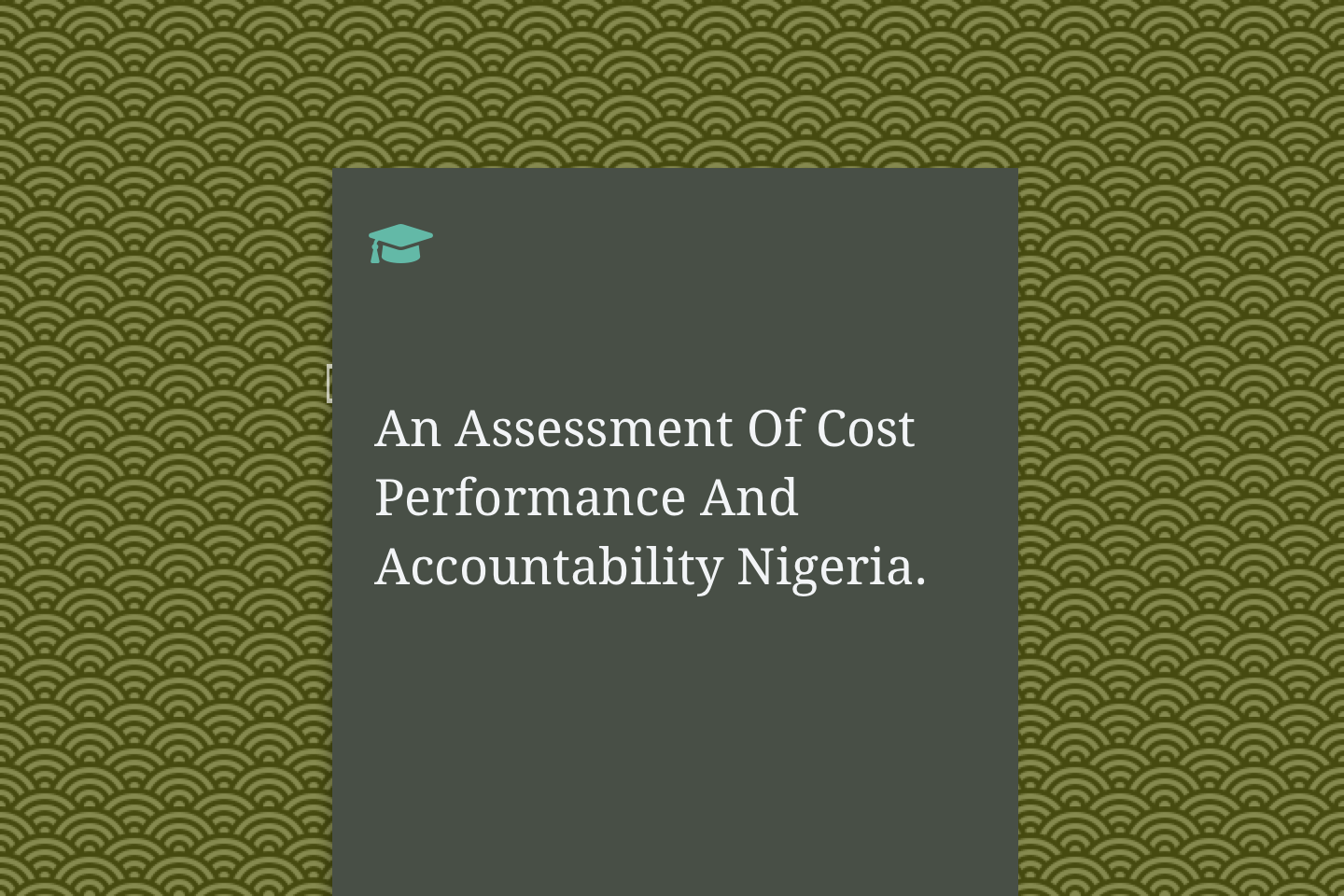 Despite an impressive level of privatization activity across Africa and the upsurge in search of the operating performance of privatized firms in both develop and developing economies, our empirical knowledge of the privatization program in Africa is limited. The purpose of this study is to appraise the post privatization cost and operating performance as well as accountability of some privatized public enterprises in Nigeria. A survey research design was adopted for the study, sixty five internal audit and thirty five accounting. Totally one hundred was randomly sampled and stratified among the staff of Oando plc Enugu state. Three research questions and hypothesis tested at 0.05 percent level of significance guided the study. Frequencies, percentages, mean and standard deviation were employed to answer the research questions while Z-test statistics were used to test the hypothesis. It was found that privatization of unipetrol has led to efficient and improved cost performance, and proper accountability to share holders. We conclude and recommend among others that effective cost performance and proper accountability to share holders is very necessary in privatized public enterprises and that government should prive the entire necessary enabling environment for the privatized company to carry out their activities without unnecessarily increasing their cost.

Privatization of state-owned enterprises (SOEs) has become a key component of the structural reform process and globalization strategy in any economies. Several developing and transition economies have embarked on extensive privatization programmes in the last one and a half decades or so, as a means of fostering economic growth, attaining macroeconomic stability, and reducing public sector borrowing requirements arising from corruption, subsidies and subventions to unprofitable SOEs. By the end of 1996, all but five countries in Africa had divested some public enterprises within the framework of macroeconomic reform and liberalization (White and Bhatia, 1998). In line with the trend worldwide, the spate of empirical works on privatization has also increased, albeit with a microeconomic orientation that emphasizes efficiency gains (La Porta and López-de-Silanes, (1997); Boubakri and Cosset, (2001); Dewenter and Malatesta, (2001) D’Souza and Megginson, (2007). Yet, despite the upsurge in research, our empirical knowledge of the privatization programme in Africa is limited. Aside from theoretical predictions, not much is known about the process and outcome of privatization exercises in Africa in spite of the impressive level of activism in its implementation.

Current research is yet to provide useful insights into the peculiar circumstances of Africa, such as the presence of embryonic financial markets and weak regulatory institution efforts. Most objective observers agree, however, that the high expectations of the 1980s about the “magical power” of privatization bailing Africa out of its quagmire remain unrealized (Adam et al., (1992); World Bank,(1995); Ariyo and Jerome, (1999); Jerome, (2005).

As in most developing countries, Nigeria until recently witnessed the growing involvement of the state in economic activities. The expansion of SOEs into diverse economic activities was viewed as an important strategy for fostering rapid economic growth and development. This view was reinforced by massive foreign exchange earnings from crude oil, which fuelled unbridled Federal Government of Nigeria (FGN) investment in public enterprises. Unfortunately, most of the enterprises were poorly conceived and economically inefficient. They accumulated huge financial losses and absorbed a disproportionate share of domestic credit. By l985, they had become an unsustainable burden on the budget. With the adoption of the structural adjustment programme (SAP) in 1986, privatization of public enterprises came to the forefront as a major component of Nigeria’s economic reform process at the behest of the World Bank and other international organizations.

Consequently, a Technical Committee on Privatization and Commercialization (TCPC) was set up in 1988 to oversee the programme. In the course of its operations, the TCPC privatized 55 enterprises. Sufficient time has elapsed since the start of reforms to allow an initial assessment of the extent to which privatization has realized its intended economic and financial benefits, especially with the commencement of the second phase of the programme. This is particularly important in view of the lessons of experience revealing interesting features that may alter earlier notions as to the most appropriate way to implement privatization programmes (Nellis, 1999). Concerns about globalization, in some transition economies (notably the former Soviet Union and Czech Republic) and disappointment with infrastructure privatization in developing countries are spawning new critiques of privatization (Shirley and Walsh, 2000). Among the pertinent issues to be addressed are: What is the extent and pattern of cost performance and accountability of privatized firm? What have been the results of these performance? Has privatization improved the cost and accountability of firm? Finally, what policy lessons are to be learned from the privatization experience so far? These are the issues that come into focus in the study.

The issue of cost performance and accountability of privatized public enterprise have been a serious subject of the debate and different interest group that is the “stakeholders”. The post privatization effect this enterprise have been the subject of public scrutiny and criticism by the public and others alike. Majority are of the view that their performance is not different from the way it was when they were under public enterprise.

Public enterprise before their recent privatization where perceived to be bedeviled by numerous challenges ranging from political interference, inefficiency in the management of resources, conflict of objectives, over dependence on subvention for survival etc. these over the years have been the main source of criticism of public enterprises and the reason why they are poorly managed . is this issue the same after the privatization o these enterprises? This study is intended to establish it.

Based on the problem statement and the objective of the study stated above the study will answer the following questions;

1.4 Objectives of the Study

The overriding objective of this study is to evaluate the second wave of the Nigerian privatization programme spanning 2008-2012. The specific objectives are as follows:

Ho: Privatization has not led to efficient and improved cost Performance.

Hi:     Privatization has led to efficient and improved cost Performance.

Ho: There have been no effective accountability to share holders and other relevant stake holders.

HI: There have been effective accountability to shareholders and other relevant stakeholders.

Ho: privatization has not led to effective checks and balances in privatized enterprises in Nigeria.

Hi: privatization has led to effective checks and balances in privatized enterprises in Nigeria.

Giving the substantial number of enterprises that are yet to be privatized, the study would provide insights into the desirability, feasibility and sustainability of future reforms. It is envisaged that the policy recommendations from the study would assist the National Council on Privatization in correcting the pitfalls embedded in the previous endeavor.

The study will assist students and fellow researchers generate information on cost performance and accountability of firm particularly if it is relevant to their studies.

In the overall, it is envisaged that the outcome of the study will assist international, multilateral and donor agencies to identify the felt needs, thereby facilitating the design of demand-driven policies and programmers to ensure the success of privatization in Nigeria in particular and sub-Saharan Africa in general.

The scope of the study has been narrowed in order to look at the impact of cost performance and accountability in the petroleum industry, particularly in UNIPETROL (now called OANDO plc after privatization). The study will cover a period of five(5) years ranging from (2008-2012).

Like many other research study, this research is confronted with the following limitations:

Finance – The cost of running any research project is quite expensive. It ranges from producing questionnaires to be distributed to respondents, the cost of transporting to the areas where information concerning the project is to be obtained etc, and this research is not an exception.

The Use Of Computer In Recording Accounting Information, Problems And Prospects

Effects of Standard Costing on the Profitability of Manufacturing Companies