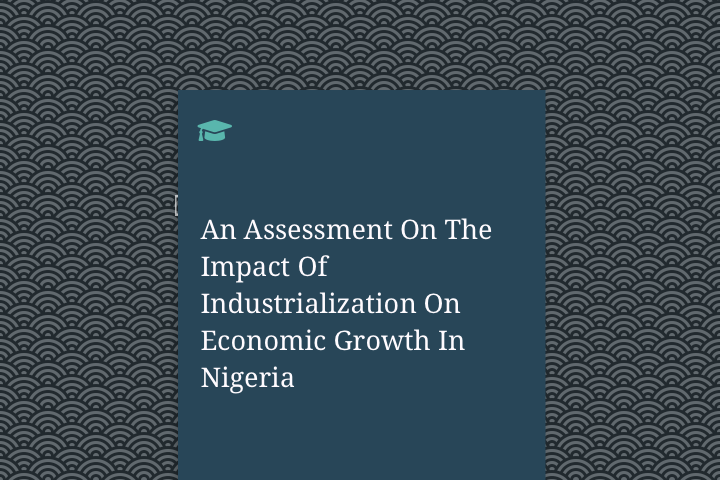 Thus in this research work, effort is made to assess the impact of industrialization on economic growth of Nigeria. Before colonial rule in Nigeria, there were numerous economic activities undertaken by Nigerians. Nigerians were among the most active and industrious group of people in Africa. The economic activities were based mostly on primary production especially on agriculture. Such activities were engaged in, included farming, hunting and quarrying. The coming of the white men to Nigeria recorded more changes in life style of Nigerians. The economy was changed from its agricultural based to a market based for imported manufactured product.

The colonial masters at the same time took the Nigerian economy as a base for the supply of resources both mineral and agricultural raw materials for industries in their own country. The worst aspect of it was that they exploited these resources at a cheap price, but when their product was brought into Nigeria, the prices were placed so high to exploit the nation. Furthermore, the colonial lords at no times endeavoured to industrialize Nigeria, and Nigerians were not motivated to involve themselves in industrial activities. All these contributed to Nigeria being both technologically backward and industrious. The attainment of political independence by Nigeria in 1960 made it possible for the 1st national development plan in Nigeria in 1962. The main aim of this plan was for industrialization. Industrialization in Nigeria was aimed at the achievement of import substitution and even export promotion. Industrial development and economic growth are necessary in any developing country. In an economy where there is availability of industries, the majority of unemployed people will engaged themselves in productive activities. If industrial development is well encouraged it will be of great help to the  developing economy and it will also go a long way in enhancing economic growth.
Industrialization is the process through which the primary based economy becomes industrialized.

According to Ojo (1987:256) industrialization could be seen as the process by which the industrial sector of such a country  or region increases its share in gross domestic product (GDP),employment, poverty alleviation efforts, investment and so on. From the works of Shaw and Emer(2000:13) industrialization is the process where manufacturing becomes increasingly important in the economic structure of the society.
According to Holis, Bacheney (1999:624) said that industrialization is the main hope of most countries trying to increase their level of income. Industrialization in Nigeria has the idea of transforming the peasant or idle workers of Nigeria into full time or part time industrial workers and on the other hand it will transform the structure of Nigerian economy. The standard of living of the people in the economy will be improved and economic growth is gingered.

The need for industrialization has become one of the problems facing Nigeria. Not with standing that industrialization can leadto economic development, creation of employment pportunities, increases in productivity, increase in foreign exchange etc. Insufficient capital is one of the reason Nigerian economy is termed underdeveloped or developing. Huge amount of capital is needed for an industrial development because it is a capital project that needs both labour intensive and capital intensive in abundant. When such funds are made available for industrialization and it is not properly utilized, it tends to create problems in the economy.
Presently in Nigeria, there are sources of finance specified to industrial sector made available by the government but in spite o f them many industries have gone into collapsing while a goodnumber are making effort to survive. The provision of finance for industries is generally problematic world-wide and is therefore not specific to developing countries like Nigeria. The study is therefore necessary to enable a thorough investigation of financial problems of the industrial sector especially that of the manufacturing industries and various  government agencies setup to provide credit facilities to the industrial sector to ensure the continual growth of this sector for rapid economic development of this nation. This work intends to find out,

It has been observed that most poorly industrialized countries of which Nigeria is one, has not realised their economic development goal even with the existence of manufacturing industries within the economy.

These are the objectives of the study.

(d) To identify the determinants of industrialization in Nigeria.
(e) To make policy recommendations.

The significant of the study lies on the fact that it will  expose the extent to which industrialization has contributed to the economic growth in Nigeria. It will highlight some obstacles hindering Nigeria from becoming an industrialized nation.
This work will be relevant to entrepreneurs and government by directing them on the easiest means of embarking on an industrial development plan. It will help in establishing the relevance of industrialization in order to uplift the economy. This study will reveal that the industrial sector is engine for economic growth and development.

This work will assist students of economics, estate management, urban and regional planning etc on how to get jobs. This means that with the help of established industrial sector, poverty will reduce and eliminated because people will be employed and it will increase their standard of living and the economy to grow.

The research work deals with the impact of industrialization on economic growth in Nigeria. This research work covers the period of years (1980-2010) with reference to limitation in a research project like this.
The data used is a secondary data which was obtained from the publication of Central Bank of Nigeria. The analytical tools employed on this research include t-test and regression analysis.

A study of this nature cannot be done without some problems and as such it was considered by many factors namely time, finance and data.

TIME – Here the researcher was having lectures, preparing for examination, engaging in such activities and domestic works as well.

FINANCE – financial inadequacy was the major limitation for this work. The researcher was financially independent as a student and materials needed for this research was not provided. DATA- the controversial nature of Nigerian data delayed this work. It took the researcher a lot of time before the harmonization of data used,

Economic Development: This is refers to the sustained, concerted actions of policy makers and communities that promote the standard of living of the economy.economic development is also defined as the quantitative and qualitative changes in the economy such action like human capital,critical infrastructure and regional competitiveness and so on.

Industry: An industry is a group of firms that produce similar product or a group mainly in manufacturing physical services Export Promotion This is defined as a strategy for promoting economic development in less developed countries. This involves running an open economy relying on a foreign market

Enterpreneur A person who organises, operates and assumes the risk for a business venture. He receives profit and bears losses.

Gross Domestic Product (GDP) –  The gross domestic product is the market value of all officially recognised final goods and services produced within a country in  given period of time. Import SubstitutionA strategy for the industrialization of less developed countries, concentrating initially on replacing imports by domestically produced substitute

Industrialization: This is the process of moving resources into the industrial sector or it is the transformation methods of production involving the use of traditional or modern equipments or mechanized equipments.