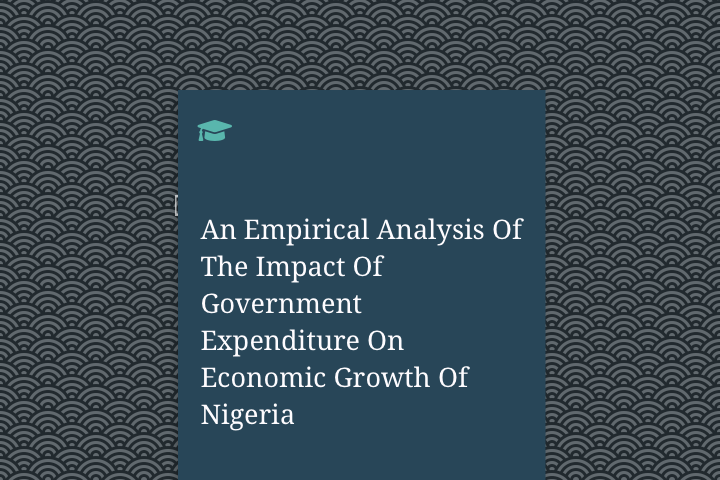 The study investigates the impact of government expenditure on economic growth of Nigeria from the period 1980-2011. The objective was set to address the problem of utilization of revenue targeted to improving the economic condition of Nigeria. The review of theoretical and empirical literature provided a basis for the selection and specification of model which was used to show if government capital and recurrent expenditure has positive or negative impact on economic growth. The data were got from CBN statistical bulletin. To proper solution to the problem, policies were recommended to tackle the setbacks to economic growth.

In all most all economics today government intervention in undertaking fundamental roles of allocation, stabilization, distribution and regulation, especially where or when market proves inefficient or its outcome is socially unacceptable. Government also intervenes, particularly in developing economics to achieve macroeconomics objective such as economic growth and development, full employment, price stability and poverty reduction. (AESS PUBLICATION 2011)
Public finance is to provide information to all arms of government in other to provide use full data as done for the develop nations that transferred public finance technology to developing nation. Public finance is used for allocation, stabilization and distribution (Musgrave and Musgrave 1989).

Public finance is the study of the principle underlying the spending and raising of funds by public authorities (shirras, 1969)  It is the field of economics that studies government activities and alternative means of financing expenditure (hymann 1993)) It is a fact that no society though out history has ever attained a high level of economic affluence without a government. Where government do not exist anarchy reigned and little wealth was accumulated by productive economy activity. After government took hold the rule of law and the establishment of private property right often contributed and it has similarly impacted on their societies as well.

Economic growth represents the expansion of a country GDP or outputs. Growth means an increase in economic activities. Todaro (1995) Citing Kuznets defined a country economic growth as a long term rise in capacity to supply increasing diverse economic goods to is population, this growth capacity based on advancing technology and the institutional and ideological adjustment that is demand. The board objective of this project is the role of government expenditure in economic growth. Government is necessary through by no means sufficient condition for prosperity it is also a facts, however, that where government have monopolized the allocation of resources and other economic decisions, societies have been successful in attaining  relatively high level of economic affluence. Economic progress is limited both when it is at or near 100%. The experience of the old Soviet Union is revealing as well the comparison of east and West Germany during the cold war era or of north and South Korea today.

In the Nigeria context, the public sectors consist of the federal government, state government and local government. The second national development, just as it considered public enterprise as crucial to growth and self reliance due to capital scarcity, structural defects in the private sector. Third nation’s development plan(1975- 1980) advocated some shift in resources allocation in favors of rural areas which were said to have benefited little from the economic growth of the 1970’s.

Thus smaller farmer and the rural population were expected to benefit from public expenditure. During the first nation rolling plan (1989-1991), government aimed at effort to combat inflation, hence large budgetary deficits were to be made more avoided. Government expenditures were to be made more cost effective and kept at level that were consistent with  the nations resources realistic growth target and general economic stability

The major instruments by which the government can ensure an effective growth in economic activities are;

i. Expenditure that induce the firm or workers to produce certain goods and services.
ii. Taxes that reduce private consumption or investment and thereby free resource for public expenditure.
iii. Regulation and controls that direct people performance or desist for economic growth to attain economic growth.

These objectives are summarized as;

a. Provision of infrastructural facilities such as good roads, light, water, transport and communication facilities etc in both urban and rural area with the view to adequate support to the productive sector and enhancing private sector participation on the various sectors of the economy.
b. Streamlining public expenditure to give priority to the completion of the initial ongoing viable project. Direct expenditure is that incurred in an establishment of economically viable commercial enterprises such as iron and steel complex, oil and gas refineries etc.

Government expenditure in addition to raising the level of economic growth also influences the pattern of production and the component of output.
Generally government expenditure is classified into two which are by current expenditure which involves all expenditure by government for maintenance of existing or new institutions and services, they are salaries, wages of public offers and fringe benefits and expenses for servicing activities which involves administration, defense and other social services like education, health and pension schemes.
The other one is capital expenditure this are the cost of bringing into existence new institutions, services and project. It is simply all government expenses on building road, factories, schools, and equipment requirement for providing social and economic services.

The size of government expenditure and its effects on long-run economic growth and vice versa has been as issued of sustained interest for decades.
According to Dunnet (1990) economic growth is an increase in real per capita gross national product (GNP).
Economic growth is the steady process by which the productivity capacity of an economy is increased over time to bring about rising level of national output and income.

Growth is an engine of development, there can be no development without growth hence, and economic growth is desirable since it associated an increase in welfare. At the new dawn of millennium Africa in general and Nigeria in particular still face monumental development like low level of income characterized by low per capita income, inequality, poor health and inadequate education. All this are consequences of poverty Nigeria present a paradox the country is rich but the people are poor. Per capital income today in Nigeria is around the same level as 1970.
Meanwhile between1970-2000 over 200million dollars has been earned from the exploitation of countries resources. Nigeria is rich in land, oil, people and natural gas resources, yet Nigeria has been bedeviled with debts problem. Nigeria has been classified by the World Bank as a low developing country. She is characterized by the wide spread poverty not less than 60% of Nigerian population are below poverty line according to the united national development report (UNDP) 1998.

The better reality of the Nigerian situation is not yet that the poverty line is getting worse by the day but more than fourteen of Nigerians live in condition of extreme poverty of less than ₦320 per month which barely provide for a quarter of the nutritional requirement of health living. The sluggish growth of the Nigerian economy despite the increase in government expenditure has been rather surprising.

Since independent according to Kweka, P.J (1969, 1986, 1999), government consumption and investment expenditure in Nigeria has been on the increase.
On the other hand, the GDP growth rate of Nigerian economy has not been regular; in fact it has been less static. In order to successfully map out a strategy for accelerating Nigeria’s growth rate in the year ahead it is necessary to full understand the sources of economic growth in Nigeria during the past four decades. One will notice that government expenditure in Nigeria has been on the increase.

The following null hypothesis will be tested at 5% level of significance.

This study has much significance on household, stakeholders and no government as a whole, because economic growth is an engine of the economy.
i. This research will serve as a research as a references on the other researcher who may carryout research work in this field of study.
ii. This research would help Nigerian government and her policy makers to restore fiscal discipline in Nigeria.
iii. This study would help in the debt management in Nigeria.

In any research study of this nature, there is normally the enthusiasm to touch as many areas as possible which are connected to the various needs of such study. However due to the nature and scope of the work, such a wild scope is out of the question since a work of this nature can hardly achieve a feat. This study will examine mainly the Impact of government expenditure on economic growth of Nigeria covering the period 1980 to 2011.