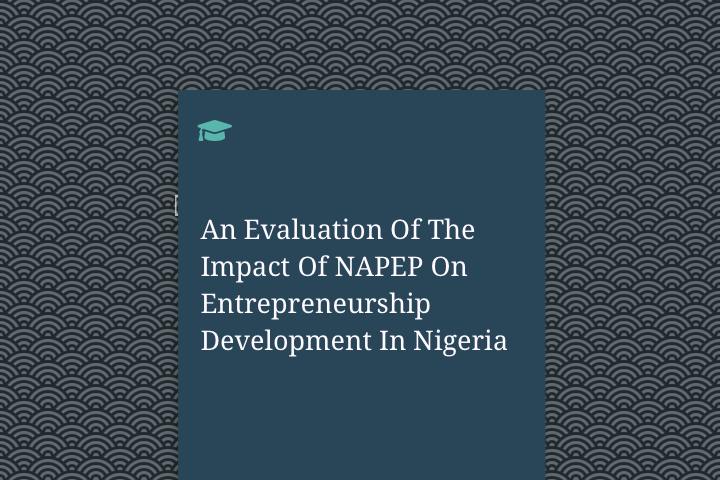 The focus of this research “An Evaluation of the Impact of NAPEP on Entrepreneurship development in Nigeria” was to access the impact of entrepreneurship activities in Nigeria, a case study of Imo State. The programme was designed by the government to cater for unemployed youth and jobless person all over the country. To arrive at my conclusion, I administered a questionnaire with some primary and secondary data on different categories to know the percentage of the response to my analysis. There were 33 questions altogether which were split into different categories. Appendix I, Section A, the questionnaire was administered to both male and female which the response was low (25) in Section B, those that were aware were just 18 and majority were aware through friends or relations, a few benefited in kind, a few in cash. In section C, assessing the impact, out of 25 people, 21 saw it effective while 4 saw it ineffective. In conclusion here it was discovered that there is no enough money to meet their challenges which causes poverty / laziness. Under policy implementation majority agreed that the policy does not address multidimensional problems. 66.7% agreed that government and NGOs are needed, while 33.3% disagreed and 5.6% agree that there are sufficient fund available. From my Chi-square table, the chisquare (x2 c calculated is (2.4994) and the chi-square (X2t) tabulated
is (15.5): if the X2 c < X2t we conclude that there is no positive relationship between NAPEP and Entrepreneurship development which is accepting the null hypothesis (Ho). In enhancing entrepreneurship development in Imo State, we finally recommended that government should monitor funds being allocated to different sectors of the economy for improved activities of NEPEP so that they further assist the beneficiaries for greater and effective participation in the programme for the interest of the Nigerian economy.

Background of the Study

Poverty and unemployment represent the biggest challenges to government in Nigeria. Unemployment rate continue to rise alarmingly, poverty has economic, social and political ramifications. Basically, Poverty has been conceptualized in the following ways;
1. Lack of access to basic needs/goods.
2. Lack of or impaired access to productive resources
3. Lack of job opportunities e.t.c.

In recent years, there has been a semblance of continuity ofliberal tradition in Nigeria; attitudes towards the system of welfare that supports the poor are rooted in our different cultural settings. The normative tradition approach to liberalism in the Nigerian society  function to promote social cohesion, solidarity and citizenship.

The duty to share among Nigerians in our diversity is intuitive. This duty rests on the consideration of human worth. In this context, we reason that others have human souls as we do and so we always choose to  be indifferent to the needs of others (FEAP, 2001). Apparently,Nigerians always choose to care for others. This duty comes from a sympathetic concern that others be able to make life. In mitigation, however, it has, over time, introduced several macro-economic measures and initiations to address unemployment questions and also promoting entrepreneurship in the country. There was a structural adjustment programme (SAP) in 1986, which preached the liberalized economic approach, Directorate of food, roads and rural infrastructure (DFFRI), which was devoted to rural infrastructural projects and more recently, the national poverty eradication program (NAPEP) but of more relevance to the youth were such initiatives as the national Directorate of employment (NDE) programs, which targeted skills development and job creation among the youths. Thus the difference between NAPEP and poverty reduction agencies is that it is not a sector project implementation agency but a co-ordination facility that ensures that core poverty eradication  ministries are effective. It would only intervene when necessary, under its secondary mandate which gives it the right to provide complementary assistance to the implementing ministries and Parastatals nationwide. The importance of both small and large enterprise growth and, more broadly, of sustainable private sector development and expansion as principal sources of economic growth and employment cannot be overstated. Economic growth is fueled,  first and foremost, by the creativity and hard work of entrepreneursand workers. Driven by the quest for profit, private sector enterprises innovate, invest and generate employment and wage income. They typically represent not only a majority of the total stock of enterprises but also a significant proportion of the national production system. They also are largely responsible for the vitality of local markets and make a major contribution to the improvement of living standard.

The promotion of sustainable entrepreneur activity both large and small and of the national private sectors that contain them, is “ a broad and wide ranging subject, because entrepreneur takes many forms, not just in terms of size, sector and spatial dimension but also in terms of how an entrepreneur is managed and governed and its legal status and operational objectives”. (Google).

A careful study of the entire poverty alleviation program already put in place in Nigeria shows that there is a drive in the direction of making more people to work by encouraging entrepreneurship and small and medium scale business.

1.2 Statement Of The Problem

It has been known in Nigeria that every government embarks on one form of poverty reduction strategy or the other in promoting entrepreneur activities. However, what has remained unanswered is the extent to which these programme have impacted on business or the entrepreneurs. Today, poverty has been addressed as a global problem, especially in places like Africa, Asia, and Latin America. On the average 45-50 percent of sub-Saharan Americans live below the poverty line. In Nigeria, about 43% of the population was living below the poverty line of N305 a year in 1985 prices. To this effect, the United Nations declared 1996 the international year of eradication of poverty and 1997-2006 a decade of poverty eradication. So many times on assumption of office in 1999, president Obasanjo indicated that the poverty situation in which over 60% of Nigerians live below the poverty line, requires more effort to prevent it
from getting worse. All these resulted to the introduction of NAPEP in Nigeria in the year 2001. Recently, studied in (OECD;2000) on poverty alleviation and its agencies as well as programs indicate that considerable gap exist between the target objectives and achievements. Despite all the efforts being made, poverty has still been in an increasing rate in the country, efforts of various government policies are ineffective and therefore not much has been done to actualize the benefits. Thus, the alleviation of poverty in Nigeria is not an intractable problem. This problem is first and foremost a political and ideological challenge requiring a recruitment effort for entrepreneur sustainability (ALIYU; 2001). Also, the lack of continuity in the programs from one administration to the other in one of the problems in the development of entrepreneurship. This study thus, attempts to answer the following questions;

The overall objectives of the study are to asses the various strategies of policies for the development of entrepreneurship.
Generally the objectives are;
To asses the relevance of NAPEP as poverty alleviation policy.
To examine the effectiveness of NAPEP on entrepreneurship development in the country.
To identify and analyze challenges of the program. To proffer some policy recommendations based on the findings of the study.

1.4 Significance of the Study

It is a well known fact that the present administration had attached much emphasis on poverty alleviation program amongst its people basically in the area of entrepreneurship, job creation and economic empowerment. It therefore requires concerted efforts by all to contribute to the success of all important but elusive goals  It is hoped that the relevance of this study serves as a ready made tool for government to apply strategic ways in promoting entrepreneur activities and also to check the youth involvement in anti-social vices such as fraud, prostitution, armed robbery etc. which could be minimized.
This study also provides an opportunity for others of government, to accept the reality that entrepreneurship development stimulates economic growth.
The study would also provide information on the role of poverty alleviation program in sustaining entrepreneurship activities. Nonetheless, this research will be of benefit to the government research and social scientist around at projecting or developing means to enhance the living standard of the entire society.

1.5 Scope and Limitation Of The Study

The study of poverty alleviation program in the performance of entrepreneurship development is a broad project to embark on due to the lack of the continuity of some policies that have been implemented earlier on in fighting the problem of unemployment and the creation of jobs and also in the promotion of some  enterprises such as the small and medium and also for other social entrepreneurs. Therefore, the research wishes to limit the scope of this study to “an evaluation on the impact of NAPEP on entrepreneurship development”. A case study of Imo state. The period of study cover from 2001-2009. Perhaps, the most debilitating limitation of this study is the inadequacy of data. The most available data was not sufficient enough and some of the data available in the NAPEP office in Imo state were outdated. There was also a limitation in terms of library facilities as it is only the World Bank, British council, United Nations and Central bank of Nigeria libraries that have materials related to the study. The researcher being a full time student had no enough time to make extensive research. However, the above limitations could not hinder effective and meaningful research work. Rather they motivated the research to try to summon them all.

1.7 Organization of the Study

Poverty: Poverty is the state of one who lacks a certain amount if material possessions or money. It could also be the deprivation of basic human needs such as; food, water, sanitation, clothing, shelter, health care and education.
Entrepreneur: An entrepreneur is a person who develops a new idea and takes the risk of setting up an enterprise to produce a product or service, which satisfies customer’s needs. NAPEP: National poverty eradication program responsible for alleviating poverty in the country.
SAP: State poverty alleviation program responsible for eradicating poverty within the state.
YES: Youth empowerment scheme, which deals with capacity acquisition, productivity, technology development and enterprise promotion.
UNDP: United Nations development program. This is the United Nations organ for development purposes. HDI: Human development index. This is a criterion used by United Nations in making and positioning a country in terms of standard of living.