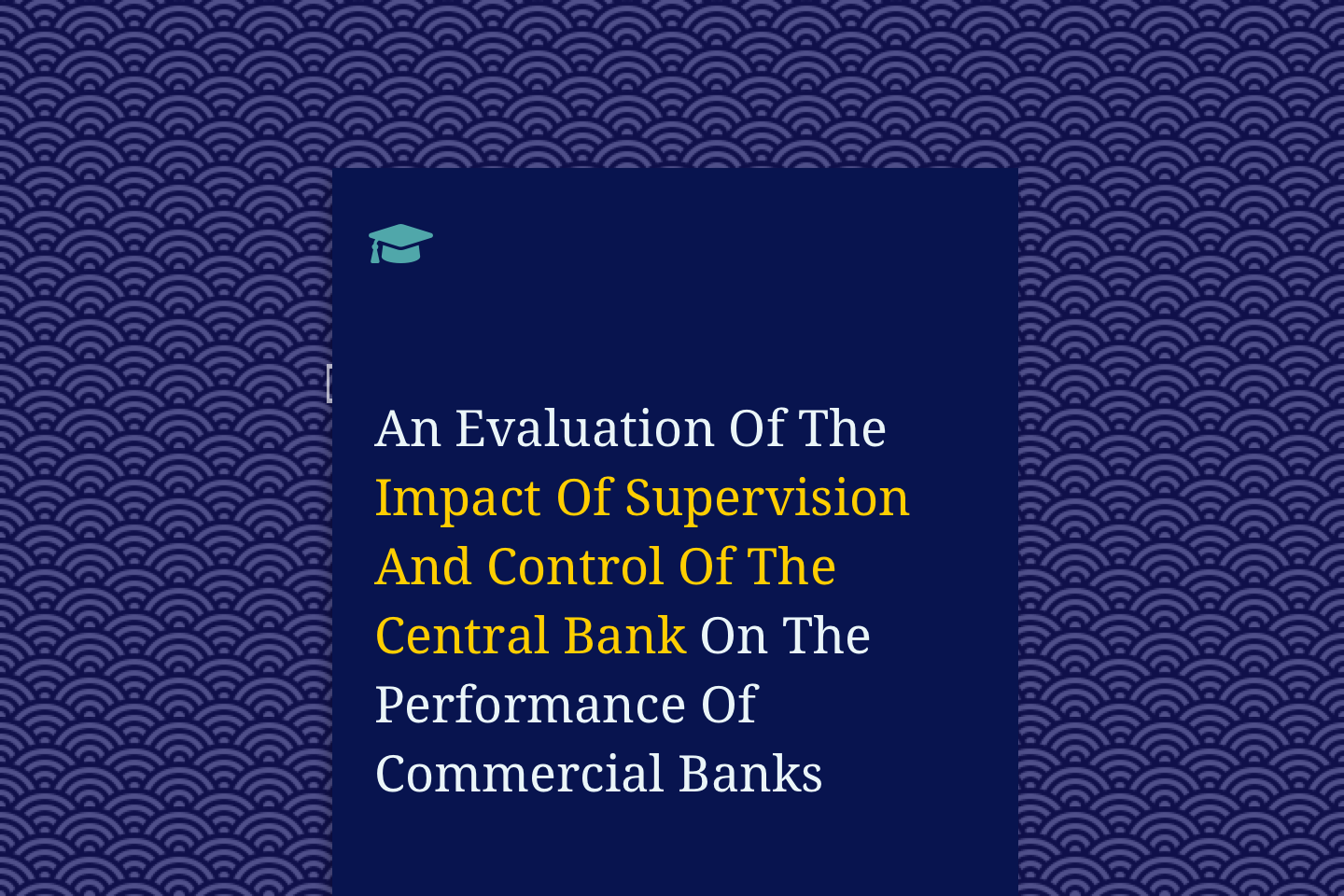 This research project tends to evaluate the impact of supervision and control of the Central Bank on the performance of commercial banks. Access Bank Nig Plc Lagos Branch was used as the case study. To aid this research both primary and secondary data were collected. The instruments used to collect data are questionnaires and oral interviews. The respondents comprised of male and female from the bank and the population put together is 150 and sample size is 109. The research design used for this work is the survey research method. In the course of this research the researcher found out that supervisory and control functions when conducted on a timely and unbiased manner ensures capital adequacy, high standard of conduct, moderation of bank charges and profitability. The researcher recommends that bank inspections should continue to be regular and timely enough; control measures of the CBN should not be too stringent as to have long negative impact on banking operations. Finally only competent, skilled and unbiased bank examiners should be engaged in bank supervision.

1.1  BACKGROUND OF THE STUDY

The roles of commercial banks play in the process of economic development in every country are crucial. They through financial intermediation increase the levels of national savings and investments by mobilising idle funds from surplus spending units (savers) and channel them to deficit spending units(borrowers) for investments in the economy. (UGBAJA 1999)

By playing these roles within a particular country, the independence of global economics created the need for global interbanking, a trend which in turn emphasizes the need for the stability of the banks involved in intercontinental banking transactions.

Also, banking business carries a lot of risks and banking public needs assurance about the safety of their confidence in the banking institutions.

The need for supervision and control of commercial banks activities is to ensure that they adhere to the stipulated monetary policies, rules and regulations as well as accepted ethical conducts. However the major contributing factor that has led to the failure of Nigerian banks in the past can be described as moral hazard (adverse incentives)

Moral hazards or adverse incentives are a concept with relevance to a variety of principal agent relationships characterized by asymmetric information. The moral hazard concerns the adverse incentives on banks chief executives to act in ways which are contrary to the interests of the banks creditors (mainly depositors or the government if it explicitly or implicitly insures deposits) by undertaking risky investment strategies (such as lending at high interests rates to high risk borrowers) which, if successful, would jeopardise the solvency of the bank. Bank owners have incentives to undertake such strategies because with limited liability, they bear only a portion of the downside risk but stand to gain through higher profits, a large share of the upside risk. In contrast, the depositors (or the deposit insurers) gain little from the upside risk but bear most of the downside risk.

The inability of depositors to adequately monitor bank directors, because of the asymmetric information allows the latter to adopt investment strategies while entail higher levels of risks.

Firstly, an increase in the interest rate may lead borrowers to choose investments with higher returns when successful but with lower probabilities of success (Stieglitz and Weiss 1989) hence a rise in deposit rates could induce banks to adopt more risky investment strategies. A rise in bank lending rates can have a similar incentive effects on the banks borrowers.

Secondly, macroeconomic instability can also worsen adverse incentive if it were to affect the variance of the profits of the bank borrowers especially when there is a co-variance between borrower’s profits. (E.g. if a large share of borrowers are in the same industry) or if loan port folios are not well diversified among individual borrowers.(McKinnon 1988)

Fourthly, moral hazard is inversely related to bank capital. The owners of poorly capitalized banks have little of their own money to loose from risky investment strategies. By implication, financial distress in the bank itself worsens moral hazard because, as the value of the bank’s capital falls, the incentives on its owners to pursue strategies which might preserve its solvency are reduced (Berger et al.1995 pp 398-99) for similar reasons intensified competition in banking market can also encourage moral hazard by reducing the franchise value of banks future profits.

Moral hazard becomes even more acute when the bank lends to projects connected to its own directors or managers (insider lending). In such cases the incentives for imprudent and fraudulent bank management are greatly increased in that all of the profits arising from the project are internalized.(in the case of loans unconnected borrowers the project returns are split between lender and borrowers)whereas that part of the losses borne by depositors or task payers are externalised. Not surprising, insider lending is a major cause of bank failure around the world.

These ills going on in the commercial banks, as stated above make it imperative for the central bank of Nigeria (CBN) to be on the watch at all times through their supervisory and control functions so as to protect them from going insolvent which usually impacts negatively on the economy in general.

Confidence plays a key role in bank operations. Any information whatsoever implying that the financial position of a bank has worsened can have a negative impact on all the cash flow in that bank. Therefore, every bank will attempt to conceal the problem of insolvency. Banks are highly successful in this respect and therefore, the problem of insolvency is often not recognised in time by the government agencies entrusted with bank supervision.

Problems in the banking system or in the economy as a whole occur when a number of banks become insolvent, or when a relatively large share of the liabilities of the banking system is not covered by good assets. The occurrence of such problems indicates that the efficient asset and liability management is present in a significant portion of banking, if a large part of banks asset is allocated to unprofitable projects. There will be a reduction in investment efficiency and thereby a slowdown on economic growth.

These could be decrease or seizure of loans grants to the public when the problems of bank insolvency begin to be resolved. When banks attempt to restore solvency by ceasing to grant loans to bad clients and raising the interest speeds, there is less available loan and they are more expensive. One consequent can be the negative selection of clients. Enterprises that do not have alternative sources of financing will be ready to accept higher bank interests rate independently of whether the projects to be financed are profitable or less profitable. Such a trend could also exert a negative impact upon investment efficiency. If banks attempt to solve the problems of insolvency by raising additional funds, interest’s rates will rise and there will be pressure to conduct a softer monetary policy. Banks also seize additional liquidity in foreign countries which affects the trends in the balance of payments.

The right which the central bank of Nigeria has to supervise and control the banking industry is backed by the CBN Act no 24 of 1991 now CBN ACT 2007 and the banks and other financial institution Act no 25 of 1991 (now BOFIA 2004). These laws empowers the CBN to carry out a supervisory and control functions on all commercial banks and other banks in the country

The powers as specified by section 39 of the CBN Act which may be expressed by the CBN from time to time in the supervisory and controlling functions include the powers to specify critical ration to call for information from banks and to inspect the books of any bank to under condition of secrecy.(Afolabi 2000: 10s)

Section 30and 7 and 8 of the banks and other financial acts no. 25 of 1991 (now BOFIA 2004) stipulates that every banks shall produce on demand all the books, accounts documents and information as the CBN examiners may deem fit in the exercise of his functions. It also stipulates as punishable the wilful refusal of any bank to produce such documents as well as negligence or wilful furnishing of false information to CBN.

The control of the banking industry by CBN is carried out in partnership with the federal government, which has the overall authority over the system. Thus the CBN initiates the guiding policy measure and implements them only as approved by the government. The CBN measures to control the banks through a number of stages which include the identification of the objectives and targets of policy. Policy formulation, policy implementation and review as well as other extra measures for commercial banks (ogwuma 2004:2).

Against this background, however the study, however, the study is geared towards examining the impact of supervision and control of CBN on commercial banks in view of how their performance is affected from the negative and the positive perspectives with concentration on the roles that CBN played from 2004 to 2011.

1.2  STATEMENT OF THE PROBLEM

With respect to supervision, it appears that the CBN apparatus are not effective. Banks examination are often not timely, not regularly carried out or haphazardly done.

Secondly, some of the CBN examiners are not sufficient competent and thirdly, they are not large enough to supervise all the commercial banks effectively. The result is that deficiencies to the operations of these banks are not timely discovered and adequately controlled. All these adversely affect the commercial banks.

With regard to the control, often times the measures are too stringent for effective operations and performance of the commercial banks. Restrictive monetary control measures limit the liquidity and capacity of commercial banks to grant loans or credit. Besides, direct interactions in banking activities by the CBN, sometimes have adverse effects too.

In the light of the aforementioned, attempt will be made to appraise the impact of central banks supervision and control on the performance of commercial banks.

In lieu of the problems stated above, the objectives of the study are

The following questions will be addressed in this study

The significance of the study derives its usefulness from many respects. Firstly, the monetary authorities (CBN) and federal government will find the study very useful. This is because the study will examine the various techniques of supervision and control of commercial banks and identify their deficiencies and constraints. This information will then enable the government and the CBN to take remedial measures which will be suggested in this study.

This study will also be useful to the banking and non banking financial institutions. It will provide information on why many of them operate and perform dismally under the CBN supervisory and control functions. This will give these institutions an understanding of their weakness and the information will enable them to take corrective actions which again will be suggested in this study.

Again, investors and banking public will appreciate this study because of the information it contains. The study will enable them to understand the role of the CBN in ensuring safety of their funds in the banks and this will help in sustaining their confidence in the banking industry.

Finally the study will be useful to students who will carry out related studies; it will serve as a relevant material to them.

1.7  LIMITATIONS OF THE STUDY.

The limitations of the study may include.