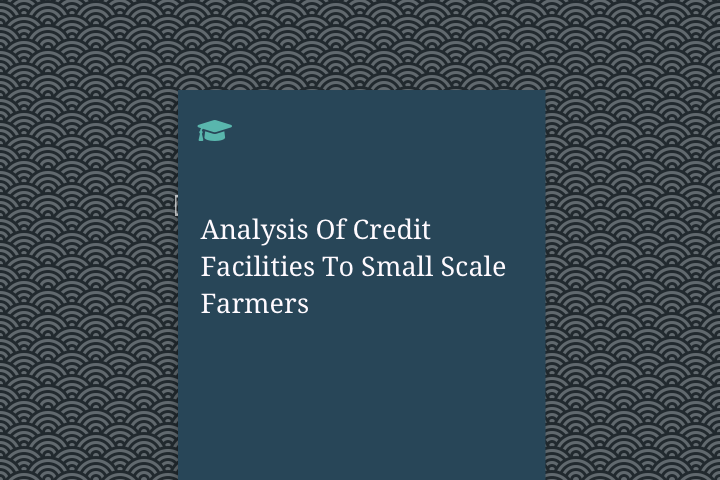 Inadequate support in terms of credit facilities from government and financial institution has been identified as one of the major problem affecting farming operation particularly that of the small scale farmers in Nigeria. This study analyzed the impact of credit facilities to the operation of small scale farms in Nigeria using BENDE Local Government as a case study. Questionnaires were used to source the data used in carrying out this research. The research design employed for this study was a descriptive survey design, in order to achieve an accurate representation of the entire population. The study makes use of simple random sampling technique as the method of data analysis. However, one strong outcome of this study is that the poor state of credit facilities to small scale farmers in Nigeria has drastically affected farming operation, thus, reduction in agricultural output, leading to importation of Agricultural product. Credit facilities therefore plays a crucial role in the operation of small scale farming, this ensures the derived output which sustain the growth and development of the economy.

Agriculture according to Longman Dictionary of Contemporary English (New Edition) is the science or practice of farming.
Agriculture has a key role to play in the economic development of Nigeria, it is a leading sector in any meaningful economic development being carried out by any nation such as ours. Agriculture as its output tends to contribute significantly in the areas like employment opportunities, provision of food to the increasing population, contribution to GDP where the country is able to earn foreign exchange, also the provision of raw materials to our local industries particularly the agro-allied industries for further production.

An overview of Nigerian agricultural sector during 1960’s revealed that agricultural sector was the most important to the economy. In fact, the generation of this period can still remember those days when the pyramid of groundnut was the pride to the northern region and cocoa production areas of the west also boosted the foreign earning from cocoa exports. Today, the nation is still not independent in terms of agriculture providing food for its people to feed on.
Credit is an important instrument for improving the welfare of the poor directly through consumption smoothening that reduces their vulnerability to short-term income. It also enhances productive capacity of the poor through financing investment in their human and physical capital. The demand for credit for productive investments usually comes from the poor who are less risk-averse and it enables them to overcome liquidity constraints, making it possible to undertake investments that can boost production, employment and income. Financial intermediaries have not been able to accommodate small-scale farmers because it is risky and a different task associated with high transaction costs. Lack of information prevented large formal leaders who had capacity to serve the smallscale farmers and the poor from doing so. It is undisputable that small-scale farmers have always had a problem of access to credit facilities. To improve the access, improvements need to be made in the provision of financial services. In order to implore financial services, leaders need to consider the preferences and socio-economic condition of clients. This contributes to both regulatory process as well as product development – thus, an understanding of characteristics influencing farmers’ decision to use agricultural credit could assist policy formulation that could enhance welfare of the poor or those excluded from access to credit facilities.
The poor performance of Nigerian agriculture and its attendant effect prompted Government to seek and reverse the situation which was demonstrated in the policies and practice such as National Accelerated food production programme (NAFPP), Operation Feed the Nation (OFN), Green Revolution Programme (GRP), Accelerated Crops Production Programme Scheme (ACPS) and international organisation like the World Bank. This includes some of the steps taken by the Federal Government of Nigeria to assist farmers to boost agricultural production in the country.

In spite of the remarkable contribution of the agricultural sector to the GDP, findings over the years here shown that government subsidies directed at the agricultural sector have drastically reduced and as such the dwindling fall in agricultural productivities and by extension agricultural development. In Nigeria, as in most developing countries, “lack of credit facilities has been regarded as the major constraint farmers face when they try to improve economic activities and/or living conditions” (Britain, 1986: Biswanger et al, 1993: Agbor, 2004). Even when available, access to credit facilities is difficult to access by farmers in the rural area despite the fact that it is an essential input in production (FARM, 2006). This could be adduced to lack of information and collateral securities among farmers.Furthermore, the behaviours of financial institutions set up to finance agriculture revealed that funds necessary to induce agricultural productivity has not been geared toward agricultural sector. Commercial banks in particular are skeptical towards financing agricultural activities and in most cases do not offer friendly interest rate to encourage farmers to acquire loans. This research study shall examine the analysis of credit facilities to small scale farmers in Nigeria.

The specific objectives of the analysis of credit facilities to small scale farmers are:
i. To analyze the impact of credit facilities to the operation of small scale farmers in Nigeria.
ii. To identify and analyze the socio-economic characteristics that may influence farmer’s decision about whether or not to use credit.
iii. To examine the probability that non-borrowers can borrow given that socioeconomic characteristics are increased.

This study is divided into five chapters. Chapter one contains the introduction of the study, chapter two deals with the review of relevant literature and theoretical framework, while chapter three presents the research methodology which embodies specification of estimating techniques. Chapter four reveals the presentation and discussion of results and findings, while summary of findings, conclusion and recommendation are provided in chapter five.