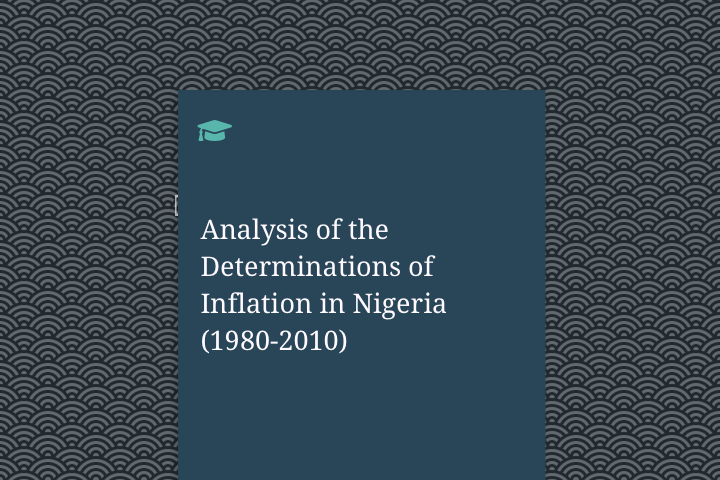 The press as its effect penetrates more deeply into the nation’s life. It has become something of a platitude to say that sharp, continuous increase in price is among the serious economic problems of our time. The main purpose of the study is to highlight the determinants of inflation in Nigeria and to check the trend of inflation over time (i.e. 1980 -2010) and the measures to curb it. The methodology involves the use of ordinary least square econometric techniques using PC Give econometric package. These include Ttest, to test the explanatory power of the estimates, the F-test to determine the significance of the entire regression plan and the second order tests, which includes test for auto-correlation, normality test, heteroscedasticity test and multicollinearity test. The objective of the study are to determine the possible determinants of inflation rate in the country and to provide economic policies and solutions to the issue of inflation in Nigeria. The data were largely the secondary data which are collected from CBN statistical bulletin. The data are collected for inflation rate and its determinants from 1980-201o.

The avoidance of rapid increase in general price level which is inflation is one of the micro economic objectives of any economy. When the price level rises, each unit of currency buys fewer goods and services. Consequently, inflation also refers to erosion in the purchasing power of money, a loss of real value in the internal medium of exchange and unit of account in the economy. A chief measure of price inflation is the price inflation rate, the annualized percentage change in a general price index (normally the consumer price index) over time. Solow (1979), for instance, sees inflation as going on when one needs more and more money to buy some representatives bundle of goods and services, or sustained fall in the purchasing power of money, a sustained rise in price level(Johnson,1972).A persistence and appreciable rise in the general level of prices(Shapiro,1994)and a continuing rise in prices as measured by an index such as the consumer price index (CPI) (Dernbury and Mc Dongall). Robert J. Gordon (1986) describes three major types of inflation as the “triangle model” and these includes demand pull inflation, cost-push inflation and built-in inflation.

The demand pull inflation occurs when aggregate demand for goods and services is greater than the aggregate supply such that the resultant excess demand cannot be satisfied by running down on existing stocks, diverting supplies from the export market to the domestic market, increasing imports. The cost-push also known as supply shock inflation caused by drops in aggregate supply due to increased prices of inputs, for example take for instance a sudden increase in the supply of oil, which would increase oil prices, producers for whom oil is a part of their cost could then pass is on to consumer in the form of increase prices. Built-in inflation is induced by adaptive expectations and involves workers trying to keep their wages up with prices and firms passing their higher labour cost unto their customer as higher prices leading to a “vicious circle” The presence of inflation in a country leads to a fall in the function of money as a medium of exchange and a store of value. The beginning of inflation in Nigeria can be said to be a direct result of policies of the country’s Governments to stimulate a fast rate of economic growth and development since 1951 when ministerial Government was introduced. Inflationary trend since independence shows the rate of inflation as been 11.4 percent in 1980,7.7 percent in 1982,23.2 percent in 1983,40 percent in 1984 and 40.9 in 1989. (Anyanwu, 1995). Inflation has continued recently to be a leading topic in Nigeria’s families and press as its effects penetrate more 3 deeply into the nation’s life. It has become something of a platitude to say that sharp, continuous increases in prices are among the most serious economic problem of our time. Inflation can also be in form of galloping inflation which is a situation where by inflationary rate becomes immensurable and uncontrollable. The central bank of Nigeria (CBN) being part of the macroeconomic management agency indulges in finding out the determinants of inflation in the economy and set up the required macroeconomics policies that will help to reduce the inflationary rate in the economy.

Inflation has a negative Impact in the economy as a whole. It is backed up with an increment with the wages and salaries of workers and also leads to fall in standards of living and economic development of the nation. High or unpredictable inflation rate are regarded as being harmful to the overall economy. They add deficiencies in the market and make it difficult for companies to budget or plan long term. Uncertainty about the future purchasing power of money discourages investment and savings. In Nigeria, some of the macro economic variables determining inflation are said to be real Gross Domestic Product (GDP), exchange rate, government expenditure and money supply. Therefore, the study is intended to look into the 4 possible determinants of inflation and recommend solutions to the inflationary trends in the Nigerian economy.

The study has the following objectives:

1. To identify and analyses the possible determinants of inflation rate in the country.

2. To identify variables which have significant impact on inflation in Nigeria?

3. To suggest possible course of action to remedy the problem.

This study apart from the set objectives will be important in the following ways:

1. It will help policy makers in their zeal to establish policy measures for handling the issue of inflation in Nigeria.

2. It will serve as a guide line for future research work on this particular issue.

3. It will assist policy makers to appreciate variables that impact on Nigeria inflation, with a view to manage such variables appropriately and effective.

This study covers a period of 30 years ,that is from 1980- 2010.However,this work like another works especially in the social sciences ,has its own limitation .In the first instance ,this study will be constrained by the amount of relevant research materials and data that are available to the researcher at the time of conducting this study .More so, paucity of official data ,their reliability when ever available as well as the inconsistencies in the data published by different sources on the same topic, all pose a challenge in the conduct of this study. Therefore, in spite of these constraints, attempt shall be made to ensure that these draw-backs do not in anyway, significantly affect the findings of this study.