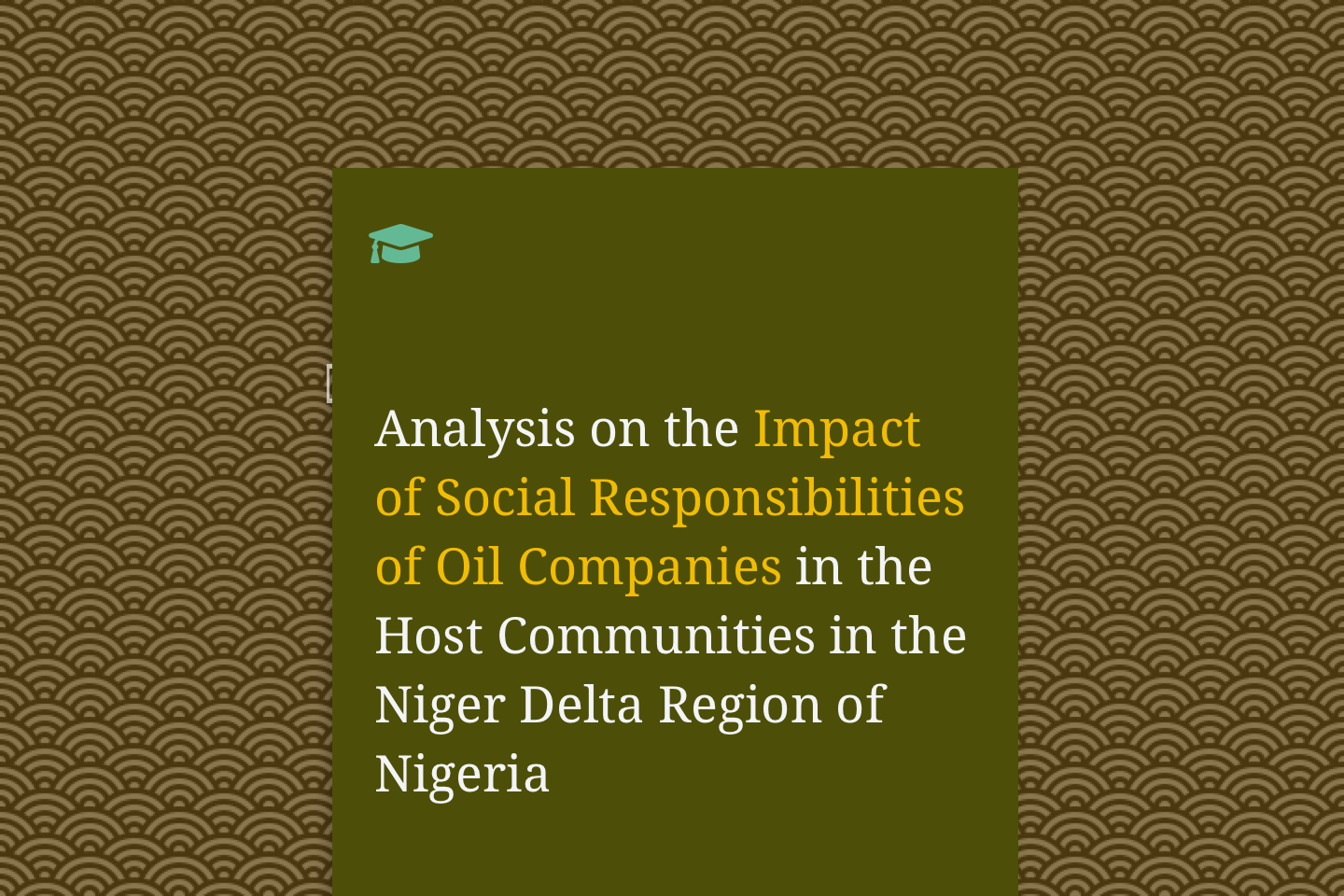 This contains the impact of social responsibilities of Oil Companies in the host communities of the Niger Delta region of Nigeria: A case study of shell petroleum Development Company. It is true that most corporate organizations especially multinational companies are not living up to expectation in solving the problems contributed in the region by their activities. Their oil exploration had causes pollution in the area, which has caused untold hardship to the people. Thus, the objective of the study was to explore how best to use the practice of public relations in solving these challenges. Both primary and secondary data were collected. Instrument used to collect primary data were personal interviews, questionnaires and observation. Secondary data were collected from textbooks, journals, magazines, newspaper and libraries. Questionnaires administration and interview methods were the principal methods used for collecting data. Descriptive research methods and survey technique were adopted by the researcher. The research findings of the project work reviewed that social responsibilities programmes are necessary. The findings also unyield that shell company earnies out its social responsibility programmes in its host community. The researcher recommended that the company should increase and expand its social responsibility programmes and government should help in the development of the communities in which most multinational companies exist.

1.1. BACKGROUND OF THE STUDY

The impact of oil companies towards improved welfare (social responsibility) for Nigerians as a whole and Niger Delta in particular goes to the very beginning. In 1962, most of the oil companies began oil exploration activities in the country. They presented the federal government an Aid-to-education plan under which they pledged to provide $900,000, over a period of five years for the education of Nigerians in various field. Since then, the oil companies have evolved a comprehensive programme for supporting the development of Nigeria’s different sectors namely education, health, infrastructural development, employment generation among others.

The concept of corporate social responsibilities as a new concept in the business world is the ability of a corporation to relate its operations and polices to the needs of the environment and the work force to the benefit of the organization and the host communities.

Corporate social responsibility involves management of an organization, working and relating with host communities and own labour force to ensure that the company is responsible and responsive to corporate government. It includes the participation of the company in such vital areas as environmental protection, training of its work force and welfare package and employment, provision of social amenities within plant location, such as water, electricity, bridges, roads, schools, scholarship programmes and youth development programmes for the community and natural development.

Business and society are inter-dependent because business cannot operate in a vacuum, it operates in the society and contribute immensely to the hazards of the environment from citizens and at same time provides employment, security and other many values to the community.

Thus, the concept of social responsibility of oil companies is vital in the life of organized business operations.

1.2. STATEMENT OF THE PROBLEM

Presently, it is obvious that oil companies are not living up to expectations of their duties in the host communities. This contributed immensely to environmental degradation of the region, the air, water and land pollution, destruction of natural habitations and waste disposal system that are harmful and destructive to the host community.

Lack of corporation to tackle the problem and reduce the effects of drilling activities on the environment and raise the standard of living of the people in the host communities became a source of concern to the youth of the region.

Secondly, lack of infrastructures and social amenities in the host communities of Niger Delta region by the federal government and oil companies operating in the region. Thus, the researcher is intended in finding out the cause of these problems in the region.

1.3. OBJECTIVES OF THE STUDY

The research objectives include the following:

The following research questions were formulated to enable the researcher carry out the study:

How has the social responsibility of Shell Company tackled varying ecological issues in the host environment? (That is help in preserving the environment.

In their assertion that all the issues raise above are met, how has it impacted on the life’s of the people?

How has Shell Oil Company through its activities made an impact on individual in the host community?

The following hypothesis was formulated base on the objectives and problems of this research.

Ho: Shell Company has been useful in providing some of the amenities to the host communities.

Hi: Shell companies has not been useful in providing some of the amenities to the host communities.

Ho: The multinational companies provide adequate infrastructures and amenities in the region.

Hi: The multinational companies do not provide adequate infrastructures and amenities in the region.

1.6. SIGNIFICANCE OF THE STUDY

The significance of the study lies in the fact that it would add to the alliteration guiding the federal government of Nigeria on how best social responsibilities of oil companies could be used and investigated in the region in order to restore progress, peace and security of life’s and property of the communities they operate.

It will equally help the government make motivating polices to encourage organizations in the region participate and implement fully, the corporate social responsibilities policies and goals in communities of operation.

1.8. LIMITATION OF THE STUDY

However, due to the constrain in getting funds, the research work was fully financed by my sponsor and was restricted from odds.

Furthermore, the problem of meeting the needed population size and other offices as regards data collection makes the research work base on questionnaires. The method of data collection was centered on the distribution of questionnaires and partly personal contracts or interview when and where necessary.

Therefore, the researcher will continue to put together the necessary and available materials and data in spite of the difficulties involved in the actualization of this research.

An Analysis of Credit Management in the Banking Industry