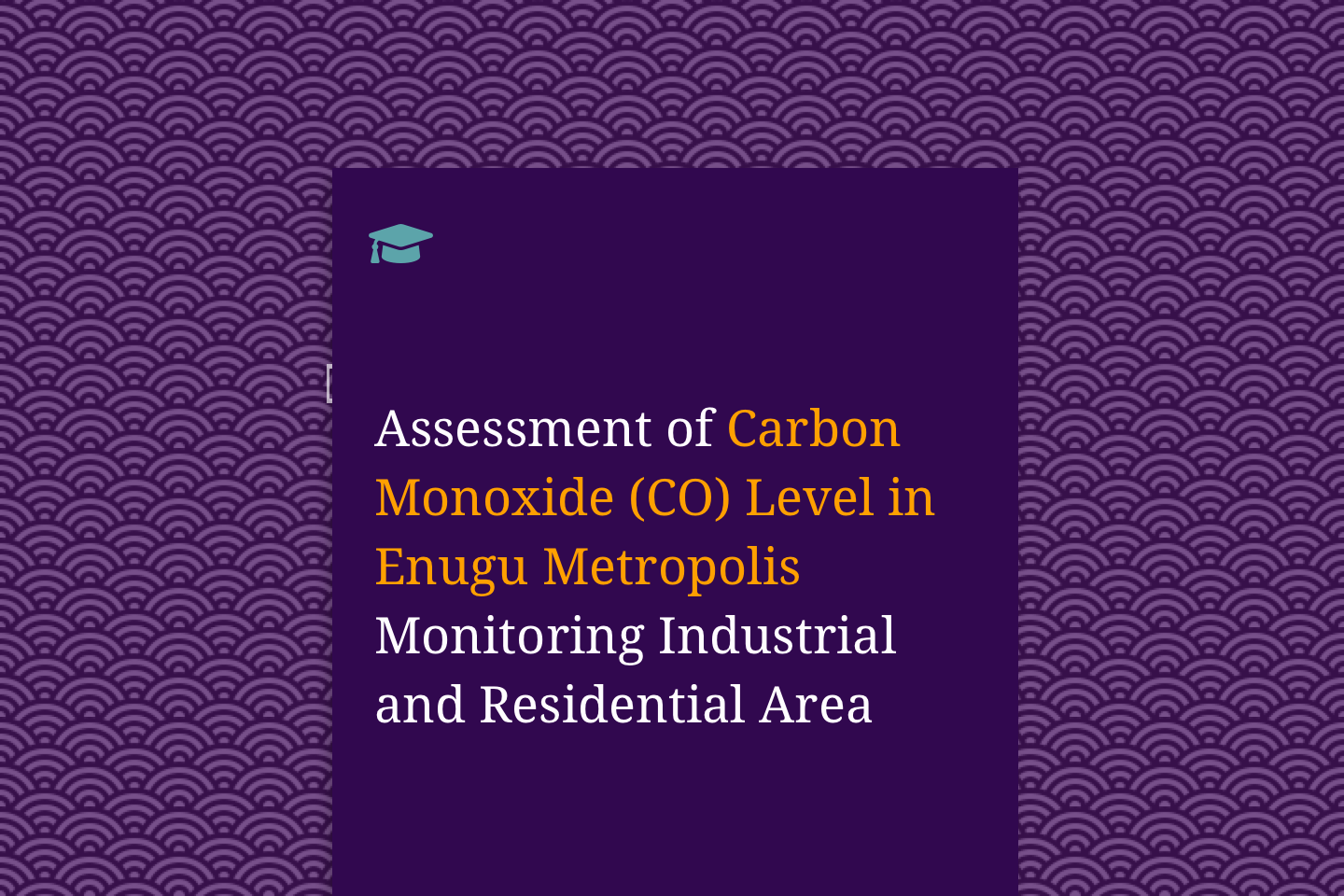 Air pollutions pollutant showed that the extent of spreading depends on the motor vehicle traffic population of the area. This pollution strongly generated through combustion of fossil fuels presents difficult environmental challenge to societies as it could degrade the environment and affect human health and quality of life. Vehicular emissions are major contributors to air pollution in urban areas as they contain harmful gases. The levels of carbon monoxide has been investigated in two locations of Enugu metropolis (high traffic ‟old park‟ and low traffic „caritas university‟), in order to determine its pollution status with regards to air. EL-USB- CO analyzer used for the analysis indicated variations in the levels of CO for the period of study. The results obtained revealed that the concentrations of CO in high traffic (HT) area is higher than that of low traffic (LT) and is unacceptable compared with the Federal Environmental Protection agency (FEPA) Nigeria set limit. The dispersion pattern of the suggests that vehicular emission contributes to the levels of carbon monoxide in the environment.

Air pollution is associated with increasing cases of many adverse health effects, e.g. mortality, respiratory diseases and cancer. The chemical composition of ambient air is very complex and depends on many different factors, traffic generated air pollution being a major source in large cities. This is especially true in the developing world, mainly due to the high proportion of old, poorly maintained vehicles, the abundance of two stroke vehicles and the poor fuel quality (Baumbach et al., 1995; Gwilliam 2003). All these factors contribute to one of the major air pollutant in urban areas; carbon monoxide (CO).
CO is a poisonous, colorless, inevitable gas that has neither taste nor smell. It is formed when carbon burns with too little air (incomplete combustion) (Smith and Scott, 2002). Carbon monoxide (CO), also called Carbonious oxide or Carbon (II) Oxide and is slightly lighter than air. CO is a deadly, colorless, odorless, poisonous gas, produced by the incomplete burning of various fuels, including coal, wood, charcoal, oil, kerosene, propane, and natural gas. Products and equipments and machines powered by internal combustion engines such as portable generators, cars, lawn mowers, and power washers also produce CO. It has a high affinity for hemoglobin in blood and displaces O2 to form carboxyl hemoglobin (COHb). This can cause dizziness, headaches and eventually death. Tobacco smoke, gas fires, burning candles are also common sources of CO in indoor air. Internal combustion engines are responsible for most of the CO in outdoor air (Smith and Scott, 2002). The ambient concentration of CO is measured in parts per million (ppm). Most of the studies on air pollution and exposure to air pollutants have been conducted in developed countries, i.e. Western Europe and the USA (Šišvić and Fugaš, 1987, Cernuschi et. al., 1998; and Chiara et. al., 2005). There is limited information on exposure to air pollutants in developing tropical countries, but some studies have been carried out in sub-Saharan Africa (Baumbach et. al., 1995; Fanou et. al., 2005; Lindѐn e.t al., 2007).

The population in Enugu city, the economic and administrative capital of Enugu state, has increased rapidly in the last decade (about one million inhabitants), and in since there is no reliable public transport system, air pollution has worsened because of an increasing number of old second-hand cars and of taxi motorbikes (Keke-NAPEP). Petroleum products used are also of poor quality, due to the importation of sub-standard products into the country. No data on health effect of air pollution in Enugu city is available to the researcher, but it is anticipated that air pollution could become a major public health problem if adequate mitigation measures are not taken at this time. Exposure to air pollution is normally assessed by environmental monitoring; using either fixed monitoring stations or personal air collecting instruments.

The world is presently confronted with the twin crises of environmental degradation and fossil fuel depletion. The uncontrolled use and overexploitation of our natural resources have also triggered other environmental issues, which hitherto were non-existent. Some of these environmental issues include global warming (climate change) and air pollution. The aforementioned have been shown to have very serious health implications. Presently, fossil fuel powered engines are noted to account for over sixty percent of the hydrocarbon and nitrogen oxide pollution which have very serious environmental and health implications, especially in our urban areas and their surrounding communities. It is thus very timely and pertinent within the Enugu city due to the growing use of automobiles and diesel powered generators within the city.
CO is one of those gases that are released from these combustion processes and its effect on our environment range from its contribution to the photochemical smog, ground level ozone and depletion of available oxygen within the area. Its effect on human health when its accepted threshold is exceeded include headache, irritation, fatigue, loss of muscular coordination, loss of memory and in severe cases, death.
The effects of CO on health are most dangerous because it is both colorless and odorless, and as such cannot be easily detected. But since these factors; that contribute to its formation and possible increment in its concentration within the city is present, it is necessary that a monitoring system of stations be set up to help in the establishment and eventual monitoring of the gas so as to ensure the safety and wellbeing of the lives of the people in the city.

The aim of this project is to monitor CO levels within Enugu city using two cities as our basis.

HO: There is a significant difference between the carbon monoxide levels within high traffic areas and low traffic areas.

The scope of this project covers studies of CO concentrations and distribution within Enugu city comprising of such districts as Old Park (high traffic) and Caritas University (low traffic). The project will examine the distribution of air pollution situation within these areas of the city. Data will be collected and analyzed for its relevance to the question of how CO disperses in the environment. To this end, two stations are chosen, one a high traffic (Old Park) and a low traffic area that is primarily residential and have low traffic flow (Caritas University). The essence of choosing these stations is to give a general overview of what the air quality is like within the city, with one station showing the residential profile while the other shows the commercial profile. The study will focus on only Carbon Monoxide (CO) gas. The gas will be measured for a nine hour period for one week at a five minutes interval using carbon monoxide sensors.

This study will also help in minimizing the level of carbon monoxide in the environment and also provide a means of solving the problems since motor bikes and vehicles serves as the case study and the major contributor of carbon- monoxide in outdoor activities.