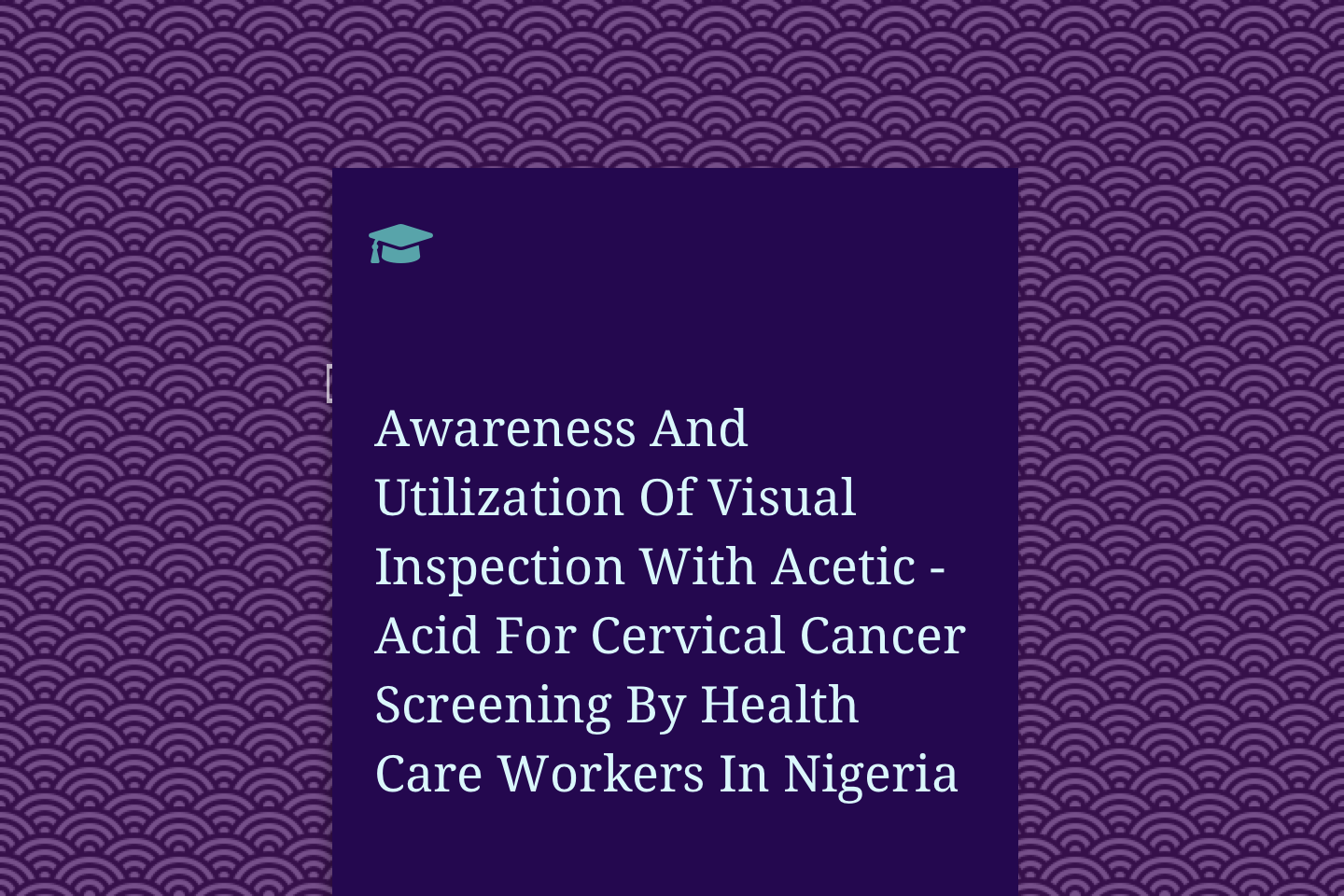 Visual inspection using acetic acid (VIA): VIA is a procedure which involves naked eye examination of the cervix using 3-5% acetic acid without magnification, usually performed by nurses and other paramedical health workers with illumination provided by a bright light source.

Screening tool: Testing procedure done to detect the presence of a cancer in sexually active women before it progresses to cancerous stage.
Awareness: Having knowledge of (VIA) as a screening tool for cervical cancer, having observed it or been told about it.
Availability: The condition of (VIA) requirement to be available, especially of being accessible or obtainable by health workers.
Utilization: To make use of (VIA) requirement, practically and effectively to screen for cervical cancer.
Health workers: A qualified nurse, midwife or nurse-midwife working in secondary healthcare institutions of Kaduna state.
Secondary healthcare institutions: Are government general hospitals mounted by Kaduna state Government.
Opportunistic services: A state whereby cervical screening is provided in tertiary hospitals together with other medical investigation procedures.

Moon, Cordoso, Baptista, Mohsin, Sten and Vermund (2012), stated that globally, cervical cancer is the second most common cancer in women with approximately 500,000 new cases and 275,000 deaths per year, of which roughly 85% of the cases occur in low-income countries including Nigeria. Southeast Asia only contributes about 25% of the world total disease burden.

The World Health Organization (2006) reported that over the past few decades, 60% of all deaths worldwide has been from chronic non-communicable diseases like cardiovascular diseases, cancer, chronic respiratory diseases and diabetes. Mortality due to communicable diseases has 1 decreased, while there is an increase in that of cancer and heart diseases. The cervical cancer incidence remains unchanged with about 44% overall survival rate or about 10 per 100,000 women dying from the disease over an average of 5 years (WHO, 2006).

According to a report of Alliance for Cervical Cancer Prevention (ACCP) (2004), the regions hardest hit by cervical cancer are among the world poorest regions which are in Central and South America, the Caribbean, sub-Saharan Africa and parts of Asia. Ferley, Bray, Pisani and Parkin (2002) earlier stated that approximately 1.4 million women worldwide are living with cervical cancer, up to 7 million women worldwide may have precancerous condition that needs to be identified and treated early.

Cervical cancer is a malignant neoplasm arising from cells originating in the cervix uteri. The cervix is the narrow portion of the uterus where it joins with the top of the vagina, and most cervical cancers are squamous cell carcinomas, arising in squamous (flattened) epithelial cells that lie in the cervix. One of the most common symptoms of cervical cancer is abnormal vaginal bleeding but in some cases, there may be no obvious symptoms until the cancer has progressed to an advanced stage (Dim, 2012).

Lauca (2003) earlier stated that Human Papilloma Virus (HPV) infection appears to be a factor in the development of almost all cases of cervical cancer. Usually, women contact HPV between their late teenage and early 30s, with peak infection, coinciding with the onset of sexual activity. He stressed that most often, cervical cancer is found much often at age of 40, with peak incidence around age of 43 and peak mortality in the late 50s. There is typically a long delay period between the gaining entrance of the organism (infection) and the invasive cancer stage, making screening programmes to be effective. In developed countries, the use of cytology screening has strongly reduced both cervical cancer incidence and mortality. Due to lack of technical skills, human resources and financing required, to maintain the screening procedure in developing countries, Nigeria inclusive, the need for visual inspection with acetic acid emerged as immediate help. (Basu, Sankanarayanan, Mandal, Roy, Das, Choudhury, Data, Karamakar, Tsu,Chakrabarti, and Siddiqi, 2002).

Cancer of the cervix is a preventable disease, and its prevention is through early detection of premalignant stages of the disease. In recent years, a screening test for cervical precancerous stage using visual inspection aided by acetic acid has been found to be a suitable low cost and a most feasible alternative modality for control of cervical cancer in developing countries (Basu et al., 2002). Visual inspection of the cervix with acetic acid (VIA) involves the inspection of the cervix with naked eye before and after application of 3-5% acetic acid solution with the use of a light source (Dim, 2012). A study conducted by Belinsan, Quao, Pretomus, Zhong, Elson, Li, Pan, Fischer, Lorincz, and Zahniser (2001) in far away rural China on 1,997 women, found that VIA had a 71% sensitivity and 74% specificity. Sankaranarayanon, Esmy and Rajkumar (2007) supported the position by stating that visual inspection with acetic acid (VIA) can be an effective and acceptable method of cervical cancer screening in developing countries like Nigeria. McCarey, Pirek, Tebeu, Boulvain, Doh and Patrick (2011) further stated that creating awareness among health workers on risk factors and current methods for cervical cancer screening is necessary and good step towards implementing effective prevention programs. They further stated that lack of knowledge about visual inspection with acetic acid (VIA) in our population and among healthcare workers can be a prime barrier for access to cervical cancer prevention.

Recent years have witnessed a significant development in cervical cancer prevention in developed countries in addition to cytology screening services. Previous efforts to implement cytology-based screening in developing countries have been conducted in the early 1980‟s but it has failed to reduce the mortality rates, mainly due to inadequate material resources, and lack of trained providers. In this regard, a recent cost-effective screening strategy using VIA emerged to be use, in developing countries like Nigeria. The screening and clinical services were available on a large scale in rural clinics of Africa. (Moon, Cordoso, Baptista, Mohsin, Sten and Vermund, 2012). Moon et al (2012) reported that VIA had been utilized by nurses and hospital physicians, with a regular clinical feedback for quality evaluation. The test is inexpensive and it‟s performed with minimal infrastructure, which may be done even in health facilities by health workers, and the results are made available immediately, thereby reducing multiple visits to the hospital health facility.

Cervical cancer is the world‟s second deadly disease with an estimate of about 493,243 women diagnosed with it and 273,505 dying from it per year (WHO, 2002). It was responsible for over 250,000 deaths in 2005. Approximately 80% of this incidence occurred in developing countries. The American Cancer Society 2012, (ACS) estimated that in the United States, 12,170 new cases of cervical cancer was diagnosed in 2012. Internationally, more than 500,000 new cases are diagnosed each year; the rates vary widely, ranging from an annual incidence of 4.5 cases per 100,000 in Western Asia to 34.5 per 100,000 women in Eastern Africa. In industrialized countries with well establish cytology screening programs, the incidence of cervical cancer ranges from 4-10 per 100,000 women (American Cancer Society, 2012).The incidence of cervical cancer in Nigeria is 8,000 cases annually out of 10,000 women. Studies in Nigeria showed that it is the commonest female genital tract disease, accounting for 74% and 73.2% in Benin City and Ibadan respectively. It was further stated that 66.25% of all gynecological malignancies occur in Northwestern zone of Nigeria where Kaduna state is located. The relative frequency is 23.5% and at least 25,000 new cases are expected to occur yearly with incidence of 25 per 1000 women (Friday and Kunle, 2003) in future.

Worldwide, successful cervical cancer prevention is based on an organized screening program, and the goal of screening is to detect the pre-invasive stage of the disease and treat it appropriately before it progresses to cervical cancer. In developed countries, initiation and sustenance of cervical cytology programs involving screening of sexually active women yearly, or once every 2-5 years have resulted in a decline of cervical cancer incidence and mortality (Miller, Chamberlain, Day, Hakama and Provok, 1990).

However, an organized screening programme is difficult to implement in developing countries where resources are scarce and the population rate is high. Although cytology screening is being carried out in developing countries, Northwestern Nigeria, Kaduna state inclusive, it is mostly done in the context of opportunistic screening activities which are often inadequately performed (Holowaty, Miller and Rohan, 1999). In Northwestern Nigeria, where Kaduna state is located, there is no established screening service and where it is available, it is rather an opportunistic service (Friday and Kunle, 2003). Many developing countries do not have adequate resources to implement cytology-based prevention program, therefore an alternative low-cost test, of visual inspection with acetic acid (VIA) has emerged for use in low-resource settings where it can be performed by trained health workers (Basu et al., 2002).

The extent to which the number of women diagnosed with cervical cancer keep on increasing has remained a matter of grave concern. It is based on this interests that the researcher intends to find out the level of awareness of health workers in Kaduna state of visual inspection of the cervix with the use of acetic acid to screen cervical cancer, whether the requirements for (VIA) are locally available in Kaduna state, and whether the health workers in Kaduna-state are utilizing it to screen for cervical cancer.

This study was guided by the following research questions;

On the basis of the research questions, the following assumptions were made:

1.5 PURPOSE OF THE STUDY

The main purposes of this study are:

On the basis of the research questions, the following hypotheses were formulated;

There are no significant differences among the healthcare workers demographic variables (Age-group, Sex, Professional category, Years of working experience, and Secondary healthcare institutions) in the awareness, availability, and utilization of VIA in cervical cancer screening in Kaduna-state.

1.8 DELIMITATION OF THE STUDY

The study was delimited to awareness, availability and utilization of visual inspection using acetic acid (VIA) in screening for cervical cancer among health workers (Nurses, Midwives, Nurse-Midwife) in secondary healthcare institutions of Kaduna state. . The use of nurses for this study is justified by the fact that the innovation of VIA is to increase the up-take of cervical cancer screening in developing countries, at primary and secondary health care institutions, also nursing staff have the highest percentage of workers among the health workers of Kaduna- state.

The response in the instrument for data collection which is the questionnaire depends entirely on the respondents‟ willingness to give accurate information relating to the study. However, effort was made by the researcher and research assistants to ensure that all the statements were very clear to respondents.