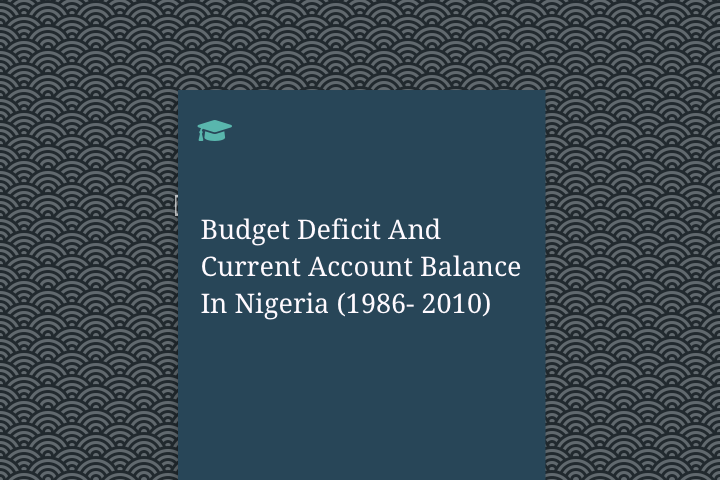 Budgeting generally can be said to be a control device in an organisation designed to ensure that activities pursued within the budget period are such that contribute to the achievement of the organisation’s objectives. For government, its objectives are the provision of services and improvement of the living standard of the people. Budget deficit is one of the most discussed economic issues in Nigeria. Baiter (1985) states that deficit are bad, always and everywhere, regardless of the country circumstance. There is a common believe among economist, that budget deficit priori harmful for the total function of economy. The budget deficit arises when a government outlays exceed revenue for that fiscal year. In an attempt to reduce large budget deficit, government usually recourse to deficit financing namely;

i) internal and external borrowing

ii) raising the level of taxation

iv) Draw down from government saving or what is called foreign reserve A deficit is financed from government borrowing which may result to accumulated debt burden or a debt overhang situation.

Inflation may result from increased money used to finance the deficit. There would be a decrease in disposable income of the consumers if the deficit is financed by raising the level of taxation,it could affect economic behavior by changing the financial rewards to various activities. Budget deficit is a fiscal instrument used by government to affect increase in aggregate demand during depression. Budget deficit has its theoretical background from the proposition made by Keynes in the 1930s during the event of the great depression;

Government expenditure is an important component of aggregate demand. An increase in government outlay that is not met the available revenue usually trigger a series of development in the economy due to the budget deficit. As in the case of budget deficit, there are also some negative effects on the current account balance; when a country experiences deficit, its deficit will cause increase in imports of goods and services and also affect adversely the domestic industry and this indirect effect on employment and income in the country. A striking feature of Nigeria’s fiscal operation since the second halve of the 1970s is persistent and rising budget deficits. Nigeria has recorded deficit and current account balance thereby experienced twin deficit. From the 2008 annual report of the Central bank of Nigeria (CBN), article 5.3 page 71, it states that there was a notional deficit of 47.4 billion Naira or 0.2% of GDP compared with the deficit of 117.2 billion naira or 0.6 GDP in 2007.

1.) Is there any relationship between budget deficit and current account balance in Nigeria?

2.) What are the causes of budget deficit and fluctuating current balance in Nigeria?

The broad objective of this study is to investigate the budget deficit and current account balance in Nigeria and how it affects the economy. Specifically the objectives are

i.) To empirically investigate the relationship between budget deficit and current account in Nigeria.

ii.)To investigate the causes of budget deficit and fluctuating accounting balance in Nigeria.

Research hypothesis is proposition stated in a testable form to predict particular relationships between two or more variables. Hypothesis of this research are stated in both null and alternative form. The hypothesis formulated for the analysis of this study and from which to draw relevant conclusion are

1.) Ho: Current account balance has no effect on budget deficit in Nigeria

This study is relevant since that it will inform the policy makers in Nigeria the nature of the relationship between government budget deficit and economic growth where in no small measure will aid in appropriate fiscal policy measure. The research work will provide insight to the policy makers in making policies that is related to budget deficit and current account balance in the entire economy.` Further more it will contribute immensely in developing the the analysis of budget deficit on macroeconomic variables and serve as useful platform tool in policy making. The study will be useful to future researchers who might be working on the topic or other related topics.

The Role Of Infrastructure Development On National Economic Growth: A Case Study Of The Telecommunication Sector In Nigeria (2000-2010)