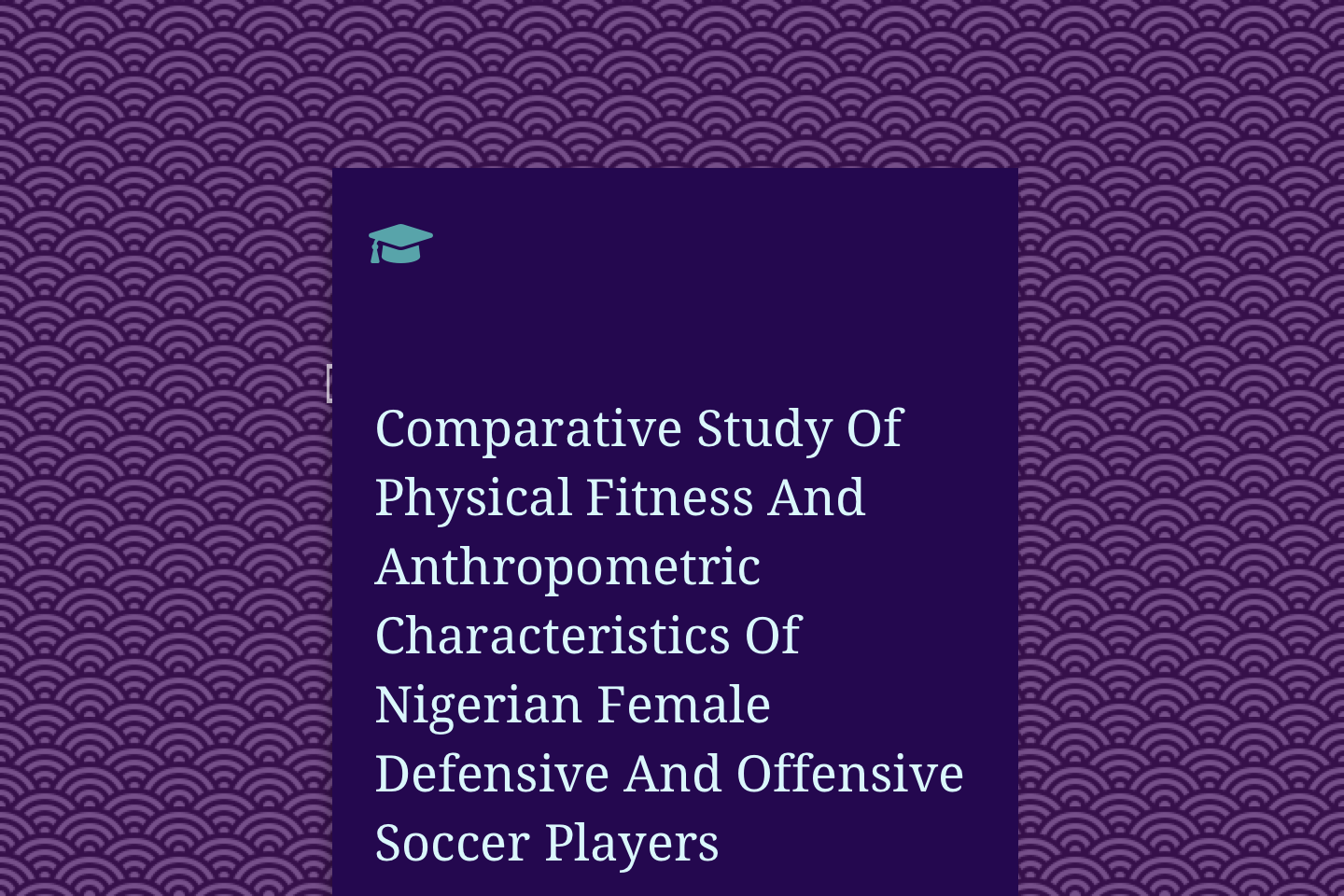 1.0 Background of the Study

Football is the most popular sport globally (Witvrouw, Danneels, Asselman, D’Have & Cambier, 2003) and its growing interest has been on the increase in Nigeria. The national team Super Eagle’s ranking has been up and down in Federation International de Football Association (FIFA) currently ranked 46 and third in the continent of Africa in male football. While in the female category both in Africa and globally Nigeria is a force to be reckoned with. The ranking suggests that our playing standards need to be improved in line with three key areas previously reported to be related to successful football performance, namely physical, technical and tactical skills, (Hoff & Helgerud, 2004)

The advent of female football in the continent was through the organisation of African Women’s Cup in 1988 by Confederation of Africa Football (CAF) (Complete Football, 1998). This stirred up the development of female football in the nation, though proper female league did not start until 1990 and by 1991 Nigeria Football Federation organised the first female challenge cup competition for female footballs registered with the federation, (Ayodele, 1992).
There was a rapid growth of female clubs in the country an indication that the country is blessed with potential female players. The swift rise of Nigeria into dominance in the African continental female football, a mecca of female players and a confirmed force to be reckoned with in the world female football. The national senior female team Super Falcon having participated in almost all the FIFA female competitions having won the African Women Cup six times since its inception in 1988.

Physiological characteristics that have been reported as essential for football players are aerobic fitness, agility, muscle strength, speed, and explosive jumping power, (Polman, Walsh, Bloomfield & Nesti, 2004). While aerobic fitness contributes up to 90% of energy utilization during football matches (McMllian, Helgerud, Macdonard & Hoff, 2005), typically high intensity bouts of sprinting are necessary to score goals. These efforts may be complemented by jumping used by footballers when controlling the ball in the air and to score or defend goals by way of heading. Sprinting accounts for approximately only five per cent of the duration; with each sprint covering up to 30 meters and most efforts not completed in a straight line. Thus, acceleration, speed, and agility are determined by the athletes muscle strength and power (Wisloff, Catagna, Helgerud, Jones & Hoff, 2004) and can be effectively trained through a well-developed and structured program. These key components have been shown to differentiate performance of players independent of their football specific skills such as ball control, dribbling, and tackling.

It is well-known fact that there is a growing interest in improving the performance of players (Popovic, Bjelica, Petkovic & Muratovic, 2012) as well as identifying talent, strengths and weaknesses, assigning player positions and helping in the design of optimal training programmes all over the world. (Hadzic, Bjelica, & Popovic, 2012) However, in many places much more time is spent on increasing the physical fitness of athletes without taking into consideration the assessment of their body composition and their nutritional status (Triki, Rebaih, Abroug, Masmoudi, Fellmann, Zour & Tabka, 2012). Contemporary sport science is designed to improve the performance of players and to discover talents as precisely as possible. However, this process is very demanding, as various games/sport events require different body types to achieve maximum performance. Therefore, understanding the body composition of players, and then assigning corresponding competitive weights for the athletes, has been done for decades and is considered an essential part of the total management process. It is widely addressed in the scientific literature that adequate profiles are primarily important in various sports, mostly due to the reason that absolute size contributes a significant percentage of total variance associated with athletic success (Carvajal, Betancourt, Leon, Deturnel, Martins, Echeverria, Eugenia & Serviat, 2012). Therefore, scientists all over the world are looking for a standard formula that can improve the performance of players and discover talents as efficiently as possible.

This study aims to examine this in respect of Nigerian female soccer player. Hence, many previous studies have evaluated ideal anthropometric profiles of successful soccer player (Milanovic, Vuleta & Sisic, 2012; Reilly et al., 2000; Veale, 2010) as well as basketball player (Gualdi-Russo & Zaccagni, 2001; Bayios, Bergeles, Apostolidis, Noutsos & Koskolou, 2006) that provides insight into the requirements for competing in the zenith of their particular sports. Indeed, soccer is a team sport that is played in an outdoor field and requires a high standard of preparation through the development of physical performance skills, as well as tactical and technical expertise, in order to complete for 90 minutes of competitive play.

In football, physical, physiological and anthropometrics characteristics such height, weight, body mass, maximal oxygen uptake etc play important role in providing district advantage of specific playing position. According to Triki and his collaborators, soccer training is mainly based on movement implementing the endurance qualities consisting of moderate activity alternating with periods of intermittent high intensity, leading to a significant production of metabolic heat, mostly due to the reason that the average work intensity during a soccer match is usually about 75–90% of maximum heart rate, respectively 70–85% of VO2max (Rexhepi
& Brestovci, 2010b). Hence, the purpose of this study was to describe anthropometric characteristics and physical fitness of Nigerian female defensive and offensive soccer.

In this regard, studies have shown that performance of elite athletes could not be differentiated from that of novice athletes and athletes with different positional roles on the basis of physical fitness components alone. Recent studies found significant differences in ball velocity between first and second division handball players (Bayios, Anastasopoulus, Svoudus & Bordolos, 2007). Gabbett (2009, reported insignificant differences in anthropometric and physical fitness qualities among individual playing positions in junior rugby league players, although props were taller, heavier and lower in speed, agility and maximal oxygen uptake compared to other positional playing groups. These studies thus suggest that certain anthropometric characteristics and physical fitness levels must be taken into consideration while designing programmes to enhance performance in any sports. For example, body weight, height, body composition, limb length, speed, flexibility, agility and cardio-respiratory endurance are essential requirements for better performance in high intensity, intermittent sports like football (Janessens, Van Rentergham & Vrigen, 2004). In addition, this physical fitness qualities and anthropometric qualities seem to defer among athletes playing in different positions in team sports. Although, several studies have been reported from other countries as stated earlier on the differences among positional players of different team sports in their anthropometric characteristics and physical fitness qualities, this investigator has not come across any studies on the differences any positional players in team sports in Nigeria. This is specially so in football, which is the most popular sport in Nigeria. Although coaches as well as players are very much aware that certain body types, anthropometric characteristic and physical fitness qualities are more important for some positional players, like defense players, than other positional players, like offensive players. No research evidence has been reported to support these common believes in Nigeria. This is especially so in the case of female football players. This study was therefore conducted to compare anthropometric characteristics and physical fitness of Nigerian female defensive and offensive soccer players.

1.1 Statement of the Problem

Soccer is one of the most popular sports in the world. This game consists of two equal periods of 45 minutes, with a 15 minutes interval. There are 11 players from each team on the field. The players may be divided into four groups, which include goalkeepers, defenders, midfielders, and forwards. For the purpose of this study, goalkeepers and defenders are considered as defensive players, while midfielders and forwards are considered as offensive players. During the game, players are required to perform activities involving jogging, running forward and backward, kicking, turning, heading and throw-in. Several anthropometric characteristics, like body stature, weight, leg length and stride length, and fitness qualities, like speed, flexibility, endurance and strength are very important for high performance in soccer.

Fitness is important at all levels of the game, while it is being essential for top level players, it is beneficial for beginners who will improve their performances through good standards of fitness. Soccer is one of those rare games which demands not only speed but also agility, strength, power, flexibility and endurance. It is characterized by short sprints, rapid acceleration or deceleration, turning, jumping, kicking, and tackling, (Bangsbo & Michalsik 2002).

Soccer is a high intensive but intermittent sport. Intense bursts of activity last less than 15 seconds each. These are interspersed with periods of less intense activity (Svensson & Drust, 2005). Thus, the game poses several physical and physiological demands on different components of physical fitness and metabolic pathways (Plateinou & Geladas, 2006). Very few studies on female soccer players have been reported on the anthropometric characteristics and physical fitness of soccer players. (Reilly et al; 2000).

Taiana et al (1993), have reported that with maximal strength of lower limbs of Soccer players’ speed in kicking performance was increased. Though it is widely accepted that speed and accuracy in kicking for goal shooting and passing are depend upon explosive strength, which is also known as power of lower extremities. Bjoern Ekblom in his book Football (Soccer) has reported that Strength in the lower limbs is of obvious concern in football, the Quadriceps, hamstrings and triceps groups must generate high forces for jumping, kicking, tackling, turning, and changing pace. It is evident from the review of literature that the performance in football is dependent on the skills, which is dependent on the physical fitness abilities of the players.

The study was to answer the following specific research questions.

For the purpose of this study, the following assumptions were made.

On the basis of the research questions, the following hypotheses were made for the purpose of the study.

There are no significant differences between Nigerian female defensive and offensive soccer players in their anthropometric characteristics and physical fitness performance.

1.5 Significance of the Study

This study is justified on the following basis

1.6 Delimitation of the study

This study is delimited to the following;

1.7 Limitation of the study

This study was limited in the following respects which would be considered while interpreting the results. Intra and inter tester variability had been reported in the measurement of anthropometric characteristics. To minimize this variability, anthropometric measurements were taken only after all the testers produced evidence of reporting the same measurements within acceptable limit (0.02 millimeters). As most of the equipment was not available to carry out the measurements, the variables in this study were measured by standard field tests. These tests were used in previous study.