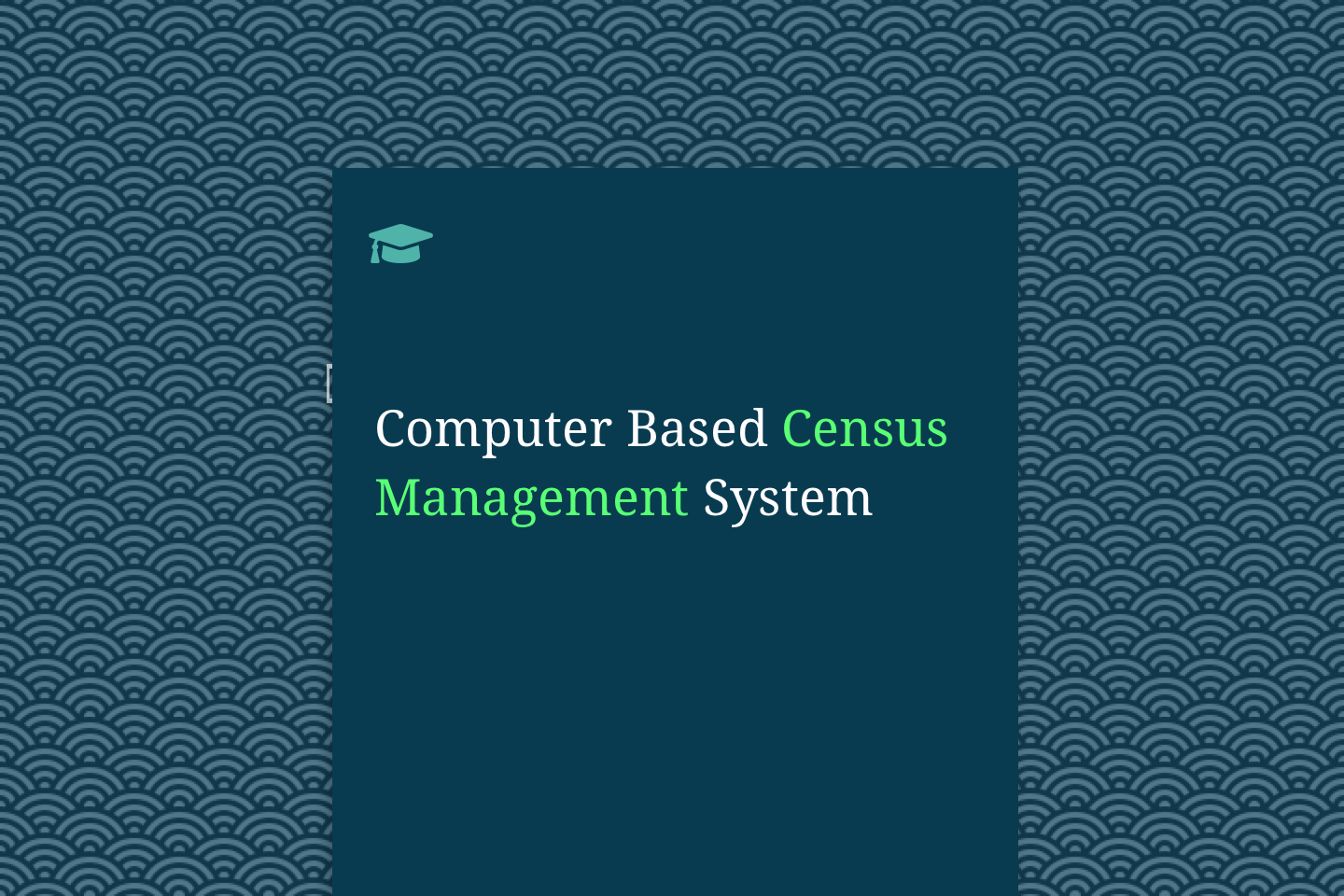 The researcher chose to research on this topic “Computer Based Census Management System” because of its relevance to the society. Meanwhile, the manual method so far has its attendant problem of being tedious. The researcher, in order to solve this time consuming, monotonous, and repetitive manual census activities went into a thorough study of the existing system. In the report proper, the Structured System Analysis and Design Methodology (SSADM) was adopted and explained. The high level model of the proposed system was also designed and displayed in a format easily understandable to the user. The high level model of the proposed system was designed architecturally and detailed designed through its separate components. There were four modules in all, each taking care of specific function like: the staff management module that maintains records about the staff; the department management module manages information about departments in the commission; the register person, the register states, and the register LGA modules that do the actual registration of individuals. Finally, the parallel change over methodology was adopted to enable the commission compare the results of the two systems (old and new) before implementation.

Census has been a reliable exercise from time, from where government rely for decision-making, and aids for administration and planning. According to Robert M. Groves, (2010) Director of the United States Census Bureau;

“Just like we cannot survive without roads and bridges, the country does not function well without an updated census to distribute funds to areas that most need them and to support community decisions and their own future.”

The increasing complexity of modern life means a greater need to plan housing, schools, roads, transportation, and a vast range of social and economic requirement for nation. This cannot be done without a detailed count of the population. Census is being officially managed by some organizations or government, for example the National Population Commission (NPC).

The installation of computer in these organizations or bodies that manages census information will assist not only in fast-recording information but also in solving certain problems, which cannot be easily resolved manually. The human resource of any enterprises are considered to be their most valuable assets, if they are properly harnessed and are well motivated to perform their assigned tasks in such a manner as to enhance the enterprises goals and objectives.

Therefore, adequate population records will provide all the necessary information that is associated with people, which include the size of the population, age structure, educational attainment, labour force and socio-economic characteristics, unlike in the manual method which makes access to data and information very tedious. The integration of different databases so that these databases can be merged and processed together and mainly other reasons, prompted the researcher to develop software for this organization, National Population Commission (NPC).

Background of the study

Census taking in Nigeria can be traced to have started from as far back as 1966 after the colonization of Lagos by our colonial masters. Since then, there have been several attempts to count Nigeria population. However, these censuses are characterized by some difficulties and deliberate and ill-minded attempts to inflate population figures; just in favour of one geopolitical zone or the other. This does not and cannot represent the nation‟s image as regards to human population. As a result of this, the National Population Commission (NPC) was established using the Decree No. 23 of 1989. The brain behind this was to have successful censuses each time and as well accurate demographic data. It is no doubt that this Commission (NPC) was vested with a lot of powers and functions some of which are;

Statement of the problem

There are many problems affecting the National Population Commission from maintaining a steady reliable figures and estimates. These are the more reasons, why the researcher embarked on this

The objectives of this study are summarized as follows:

1.4 Significant of the Project

The system will solve problem associated with the acquisition, storage, and retrieval of information on human population with ease.

A timely retrieval of information is anticipated with efficiency and reliability.

It will provide security to data that are unauthorized, users will not gain access to those files and fraud will be minimized in the society which will lead to improvement in administration processes.

1.5 Scope of the Project

During the course of this study, many things militated against its completion, some of which are;

DEMOGRAPHY: Demography is the scientific study of the changing number of births, deaths, diseases, etc in a community over a period of time.

POPULATION: Population is the total number of people living in a particular area, city or country.

CENSUS: A census is the procedure of systematically acquiring and recording information about the members of a given population.

ENUMERATION: Enumeration is the head to head count of all individuals in a given society within a period of time.

ESTIMATION: Estimation is the act of making an approximate calculation of something.

PROJECTION: Projection is an estimate of the rate or amount something.

Design and Implementation of a Computerized Database System for Outpatient