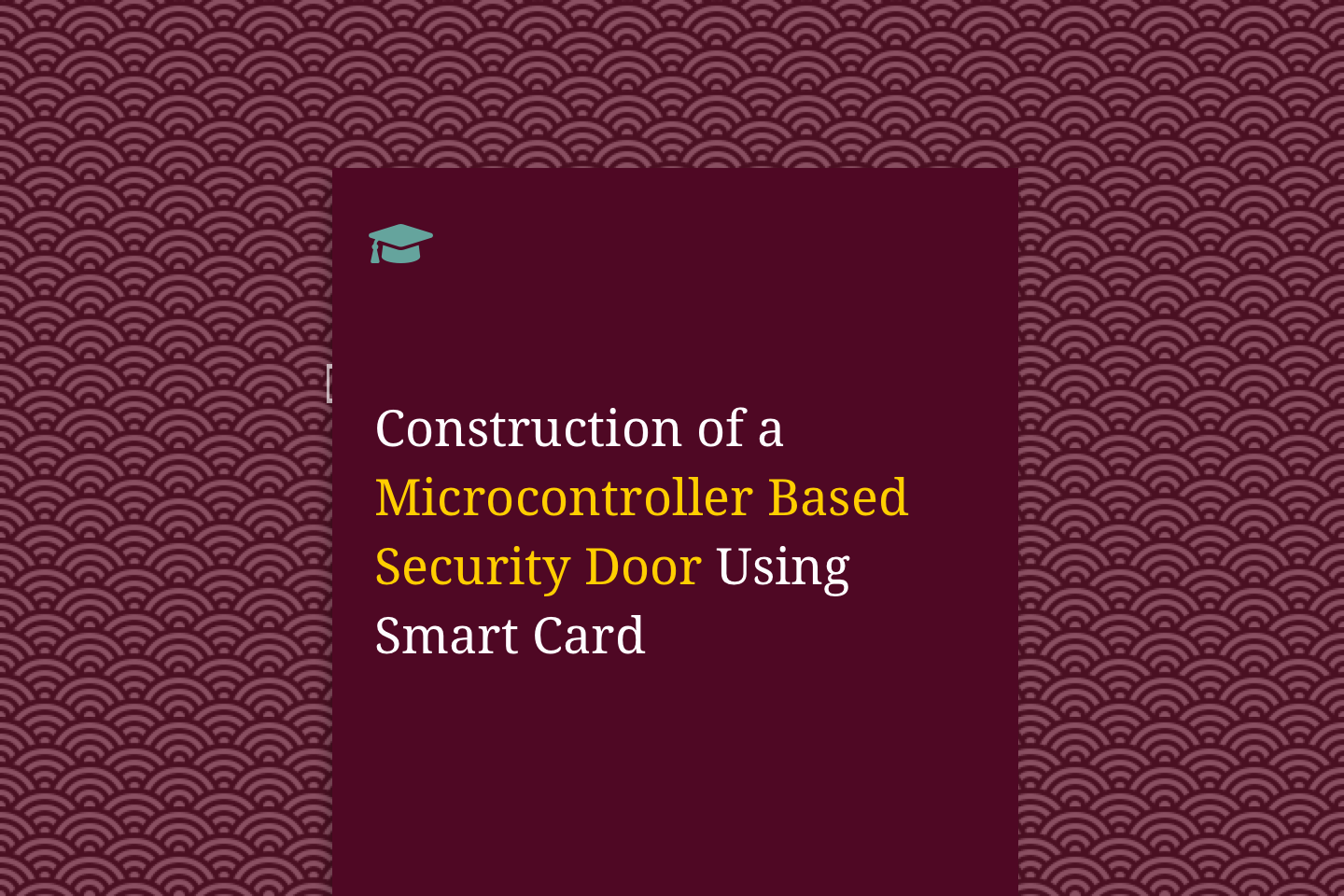 Construction of a Microcontroller Based Security Door Using Smart Card

This project shows the construction of a microcontroller based security door using smart card. It is aimed towards programming the microcontroller to control the hardware in sliding door. The system consists of a microcontroller 89S52 which sends a signal to the multiplexers on insertion of the smart card in the card slot. The multiplexers consist of ICS which prompts for a display of the identity of the card user in the liquid crystal display (LCD). The LCD displays the status of the card. On validation of the card, the LCD displays a welcome note to the user and prompts for a pin code. The pin code is being keyed in from the key pad. If confirmed by the program written into the microcontroller access will be granted, otherwise no access, giving the user two more chances to insert the correct smartcard or pin code to it, before final denial of access and alarm. When access is granted, the card sends a 5volt signal to the microcontroller which triggers relay, resulting in the opening of the door.

Creation of secured access path to offices, homes, hotels, industries etc. has been a successful discovery of man. As a result of this, it has been possible to create door/gates that are well secured using smart card.
Individuals are becoming more aware of the dangers/ risk associated with relying on keys or padlocks to provide security to unauthorized areas of their apartments. Fraudsters/criminals can forge keys or make master keys that will be used to break into such rooms or offices. To eliminate this insecure and old fashioned method, the use of password in doors/gates mechanism evolved. The development of single secret authentication such as password is an effective security control.
A long pass-word of more than ten characters that consists of random letters, numbers and special character can be very difficult to crack. Unfortunately, users cannot always remember the sort of pass-word, partly due to fundamental human limitations.
However, most security guidance recommends at least eight character random password. Because most users cannot commit eight character random password to memory and many attempt to write it down on a piece of paper which can be misplaced or seen by another person, while some users tend to choose easy to
remember passwords such as ‘123‘ or other easily guessed characters. Due to this shortcoming of a single secret authentication, creation of two factor authentication evolved.
Two-factor authentication i.e. System that uses card and pin code for authentication overcame the issues of single secret authentication by the requirement of a second secret. Two-factor authentication uses a combination of the following items;
Something that the user has, such as hardware token or a smartcard.
Something the user knows, such as personal identification number (pin). Smartcard and their associated pins are becoming increasingly popular, reliable and cost effective. Two-factor authentication with the right control in place, the user must have the smartcard and know the pin code to gain access to the required apartment. The smartcard requirement significantly reduces the likelihood of unauthorized access to an organization‘s outfit.
Hence to reduce or eliminate the access of unauthorized personnel into unauthorized areas, an automated door/access path is to be constructed. This involves controlling the doors/gates by an artificial means (artificial intelligence). It involves the application of automated system that is incorporated into these doors/gates for efficient and optimum performance. Taking the advantage of the microcontroller as one of the fastest processing and intelligent instrument, was incorporated into the system and interfaced with smart card in order to achieve accuracy in processing.
This project was constructed using microcontroller for better creativity and beauty in design. The microcontroller (programmable) has series of instruction fed into it, this help it to accomplish most intelligent task like the human brain. These include detection of card, identification of password, displaying ―access granted‖, ―access denied‖ and opening and closing of door/gate with the aid of the smart card. An electromagnetic relay controls the opening and closing of the door/gate which is moved to and fro by a synchronous motor (DC).
The microcontroller based security door using smart card is designed using the 89S52 microcontroller with appropriate software package. The project is segmented into different module which includes; the mechanical, electrical/electronic and programmable (computerized) part as listed below;
The microcontroller: The microcontroller does most of the addressing and instruction execution through its data, address and control busses.
The Keypad: The keypad is used for selection i.e. As an input device to issue instruction to the control processing unit (CPU) of the processor.
The smart card and its associated pin: provide the security system.
The Display Module: the display module shows the output of events that are taking place.
The Electromagnetic Relay: The help of the relay is utilized by the CPU to switch the motor ON which moves or turns causing the gate/door to slide to the defined direction.
The Alarm Unit: The alarm unit produces an alarm signal when a wrong password or pin code is entered more than three times.
The power supply Unit: The power supply unit supplies a voltage for optimum operation of the circuit.
In all, this project demonstrates the integral function of what is obtainable in real system.

The major aim of this project is to construct a system that uses two-factor authentication (smart card and their associated pins) to provide security control to reduce the threat of authorized access to some restricted areas. It also aims at bridging the technological gap between developing and developed countries of the world.

The construction of security door using smart card is based on discrete components like resistors, transformers, Liquid crystal display, transistors, relays, microcontroller, D.C motor, diodes, bridge rectifier, bolt and nuts, aluminum etc. This project design can be mounted on hotels door, office door etc with the incorporation of big dc motor and thyristor that will be able to drive specially constructed sliding gate/door when activated.

Construction of a Microcontroller Based Gate