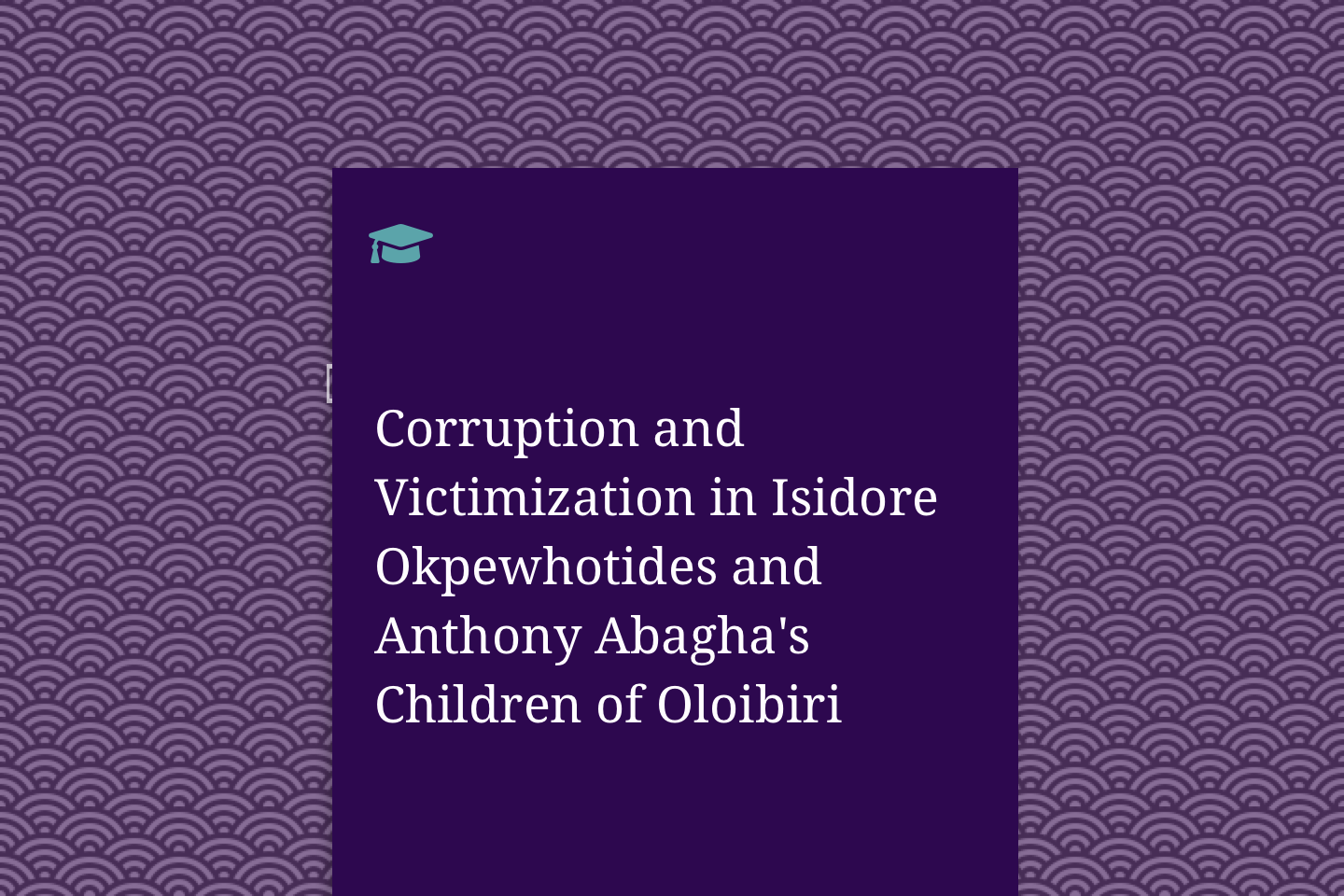 BACKGROUND TO THE STUDY

In philosophical, theological or moral discussions, corruption is spiritual or moral impurity or deviation from an ideal. In economy, corruption is payment for services, or materials which the recipient is not entitled to under the law. In government, it is when an elected representative makes decisions that are influenced by vested interest rather than legitimate or established government or party regulations.

In life there are political, moral and systemic corruption or abuse of power. Moral or political corruption involves the abuse of public power, office or resources by elected government officials for personal gains, by extortion, embezzlement, soliciting or offering bribes or other forms of inducement. Official corruption is a specific form of a misconduct designed to obtain undue benefits, personal gains or career advancements. Police Officer, for example, sometimes flout the police code of conduct in order to secure conviction of suspects through the use of falsified evidence.

Systemic corruption is the complete subversion of a political or economic system – which is primarily due to a weakness of an organization or process. It can be contrasted with individuals, officials or agents who act corruptly within the system. Lack of transparency, low pay, injustice, greediness, exploitation and poverty are the factors that encourage corruption.

Corruption poses a serious development challenge; it undermines democracy and good government by flouting or even subverting formal processes. Corruption in election and in legislative processes reduces accountability and distorts representation in policy making. Corruption in the judiciary compromises the rule of law and corruption in the public administration results in the inefficient provision of services. It violates basic principles of the country regarding the centrality of civic virtue. Corruption facilitates environmental destruction. There is also industrial corruption; this occurs when bribe is pride by a supplier to an industry or a manufacturer in order to sell low quality goods at the price of good quality products.

Corruption is a harmful force that hinders government and represses individual in many countries throughout the world. It is generally a word used to qualify the existence of common social ills that affect the entire aspects of our society.

Victimization is the process of being victimized, becoming a victim or being unfairly punished. Victimization means making someone a group of people to suffer unfairly because you do not like them, their opinions or something that they have done. The trauma of victimization is a direct reaction to the aftermath of unfair punishment. Victims suffer tremendous amount of physical and psychological trauma. The physical injury suffered by victim may be as apparent as cuts, bruises or broken arms and legs. It is common for victims to be fatigued, unable to sleep or have increased or decreased appetite.

Many victims believe that the stress caused by victimization endangers or exposes them to physical or psychological problems later in life.

In our society, people are victimized because of or for many reasons. In the ancient days and still in some places women are being victimized after their husbands’ death and when they are unable to give birth to children. Women are often socially and psychologically victimized in the absence of their husbands and children. Men who are impotent or childless suffer victimization by not allowing them to comfortably air their opinion in their fellow men’s social gathering.

When one is denied of his rights and possessions and is maltreated for no justifiable reasons, he is being victimized. Such a person often tries to avoid society and especially the company of his victimizers or those opposed to his way of life.

STATEMENT OF THE PROBLEM

Nations, Organizations, Institutions and individuals especially those mentioned in the novels understudy participate in or experience corruption in different ways that are often overt or covert. Euphemisms are often used to make corruption and/or victimization less offensive or palatable in the society. Often, their perpetrators are ―honourable‖ or important people, in short ―sacred cows‖ in the society—Those people ―respect‖ or fear to confront. This study intends to explore the terminologies the culprits invent and often use to hoodwink the society.

OBJECTIVES OF THE STUDY

This research work is conducted as it is an area where nobody has worked on. The study is being made to expose the problems caused by corruption and victimization and their effects on the national and private sectors of our national life and economy and possibly proffer useful suggestions/solutions to the malaise.

Basically, the study is focused particularly on corruption and victimization as explored in Tides by Isidore Okpewho and Children of Oloibire by Anthony Abagha. References to Okpewho’s and Abagha’s other works and works of other writers, journals, magazines and newspapers would also be made to enrich the study.

This research has both practical and theoretical significance to the general public especially social organization, institutions, social activists, psychologist, leaders and literary artists who should understand the level of corruption and victimization operating in the society. It will also bring to limelight the impacts of corruption and victimization on individuals and society at large. This work is undertaken with the intention that the result will be of help to the leaders of the nation at all levels of government, serve as a good material to students and scholars as well as concerned persons who may like to make further research on this subject matter in the interest of all and sundry.

Since this study is based on Okpewho’s Tides and Abagha’s Children of Oloibiri, the methodology will basically be literary in terms of what the library and the internet will offer by way of critiques, journals, magazines, newspapers and interviews on Niger Delta literature and environment.

Factors Affecting The Choice Of Language In A Multilingual Society