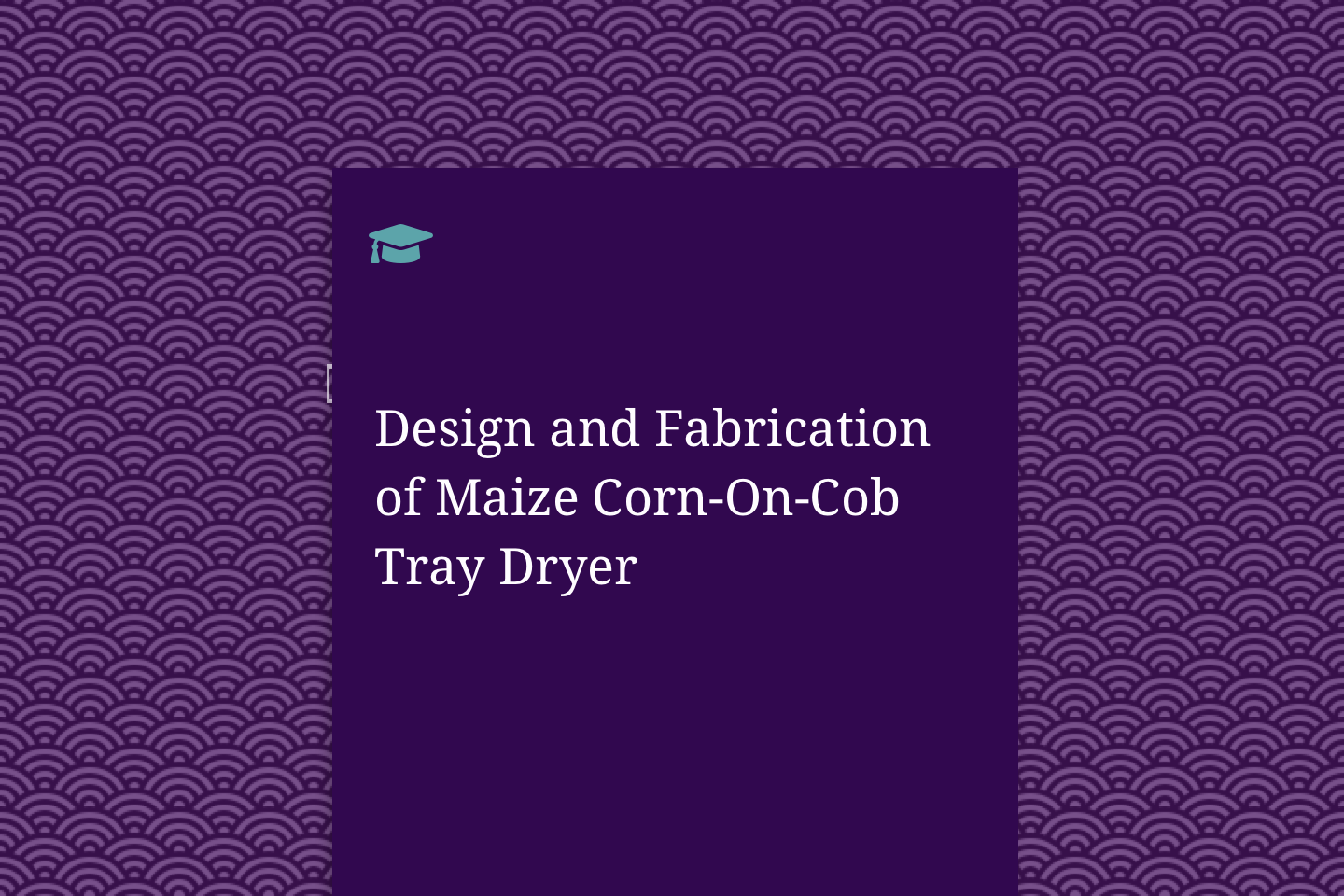 This study was carried out to generate a design data, design and fabricate a maize corn-on-cob tray dryer used by maize farmers. Ripped maize corns with husks were bought from the market and preserved to retained its moisture content, dehusked and thereafter, dried to a given percentage moisture content of 15%. This was done by laboratory dryer. The drying rate data was generated and the high rate of 2.0g/hr was used afterwards to design and fabricate the corn-on-cob dryer. From the results, drying of a sample of maize corn-on-cob by the laboratory dryer took a period of three days and six hours to reach the 15% moisture content (wet basis) needed. A test run was carried out on the fabricated dryer and seventeen hours was used to dry a sample of maize corn-on-cob to the same 15% moisture content. This implies that design data is satisfactory as its application in the fabrication of the dryer resulted in an increased flow rate of air in the dryer thereby increasing the rate of drying at the same drying temperature of 40oC.

Cereal grains have been and will continue to be a major source of food for humans and animals throughout the world. Amongst all cereals, the most important is the maize grain. (Leonard et al, 1963). Maize corn and products can be used for various purposes; human food, alternative medicine, chemicals, bio fuels, ornamentals, fodder, to mention but a few (Leonard, Warren H., and John H. Martin). Maize crop is intensively and extensively cultivated in all the geo-political zones of Nigeria. Early maize is planted between late March and late May while the late maize is planted between August and September. The harvest time for the early maize is usually between late July and September. During this period, corns are harvested fresh and cannot be preserved by drying owing to the unavailability of sunshine during the rainy season. It is usually roasted or cooked fresh. This practice does not encourage maize farmers as they would sell the maize corn at a give-away prices and this does not guarantee returns on their investment. In addition to this, dried maize grains will guarantee food sufficiency during the scarce period. Notably, corn of high moisture content does not stored very well and is usually vulnerable to damage due to deterioration, molds, and insects during the period of storage.
However, open air-sun drying as practiced in most rural areas often yields poor quality dried corn, since the product is not protected against dust, moisture, wind, rodents as well as other domestic animals while carrying out the drying. As a result, they are often contaminated with pathogens. Another common practice in maize corn-on-cob drying is drying over a fire place. This has its own problems as the maize grains are contaminated with smoke. Moreover, the temperature of drying is not properly controlled such that grains become dead after drying. There are various research works that have been carried out on grain drying (Zare et al, 2006; Mellmann, et al 2011; Adzimah and Seckley, 2009). These works were silent on drying and dryer design for maize corn-on-cobs.
There are four major drying techniques; open air sun drying, fire wood /fuel drying, electrical drying and solar drying(Anyanwu et al 2006, Scanlin 1997 and Whitefield 2000). This research project will address these problems associated with postharvest handling of maize corn-on-cobs, in particular drying, by designing and fabricating electrically operated tray dryer that will be simple but very robust in operation.
1.2 STATEMENT OF THE PROBLEM
Maize corns are usually stored when dried to certain percentage moisture content. In Nigeria, maize corn drying is done in dry season because of low humidity of atmospheric air and adequate sunshine. However, it is a common place to see peasant maize farmers dry their maize corn-on-cobs over fire place, but this practice contaminates the dried maize corn with smoke and usually small quantity of maize corn-on-cob are dried. The reverse is the case during the rainy season. Unfortunately, bulk of the maize corn is harvested in the rainy season and farmers can not dry the fresh maize corn rather they sell them at very cheap prices to corn roasters and for other delicacies. To give value to farmers and also to guarantee maize corn sufficiency during scarce period, it becomes necessary that a simple but robust corn-on-cob dryer should be designed and fabricated to assist farmers have good returns on their investment especially during post-harvest handling of maize corn during rainy season.
1.3 OBJECTIVES OF THE RESEARCH
The aims of this research include:
1.4 SIGNIFICANCE OF THE RESEARCH
Some of the benefits derivable from this research project include:
1.5 SCOPE OF THE RESEARCH
This research will be restricted to the following areas;