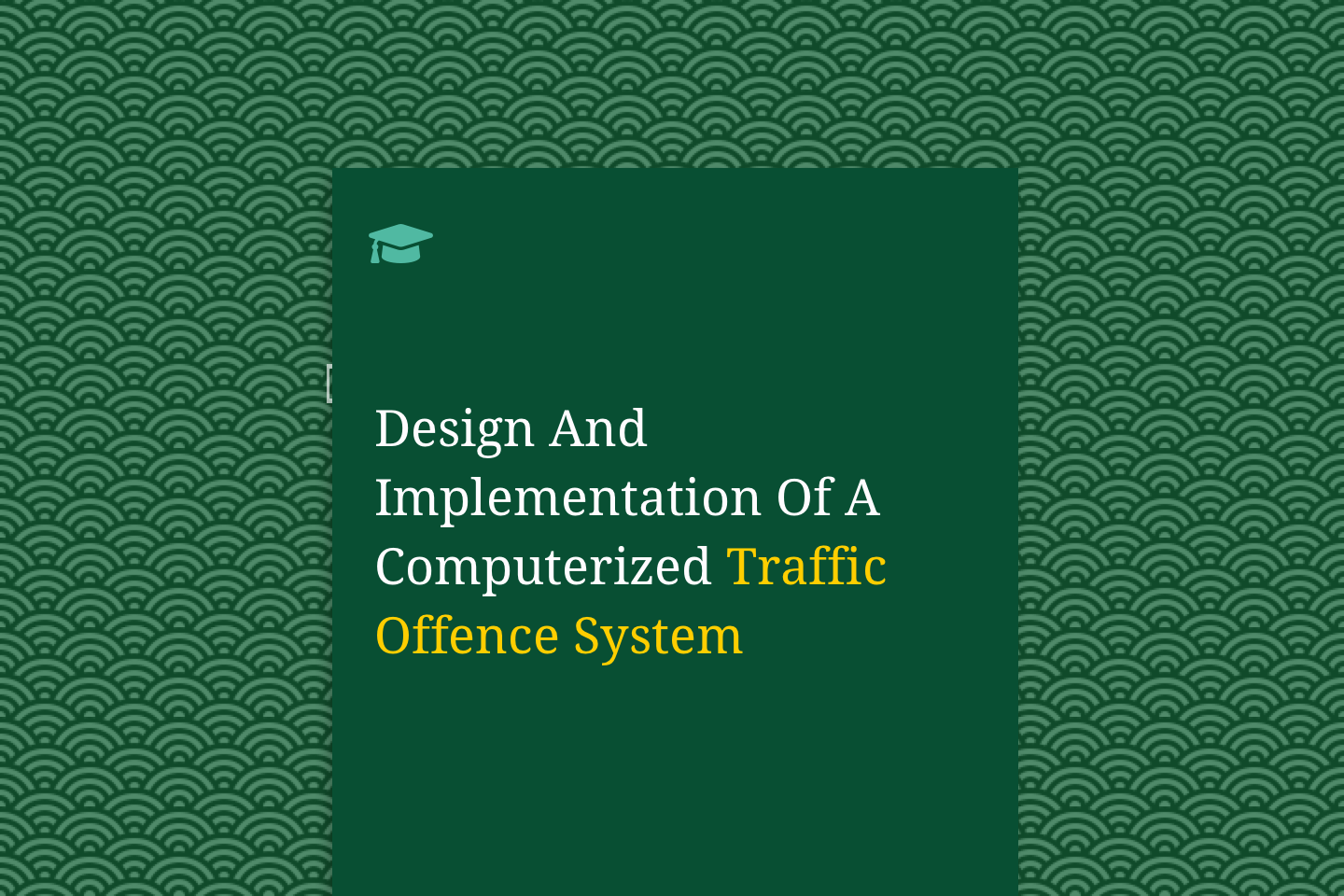 Design And Implementation Of A Computerized Traffic Offence System

Computerised Traffic Offence System is a powerful web based and database program that records all the traffic offences committed nationwide. The system helps the Federal Road Safety Commission keep adequate records of all traffic offences that has been committed and that will still be committed by road users and also maintain the databases of the commission (FRSC).

Prior to the establishment of Federal Road Safety Commission in 1988, there was no concrete and sustained policy action to address the carnage on Nigerian roads. Earlier attempts in this direction were limited to discrete and isolated attempts by some states of the Federation and individuals.The unpleasant trend in the nation’s road traffic system which resulted in upsurage in road traffic accidents made the Federal Government initiate a search for a credible and effective response to the challenge. In February 1988, the Federal Government established the Federal Road Safety Commission through Decree No .45 of the 1988 as amended by Decree 35 of 1992 refered to in the statue books as the FRSC Act cap 141 laws of the Federation of Nigeria (LFN). Passed by the National Assembly as Federal Road Safety Commission (establishment) Act 200. Around the world road traffic injuries are a major public health challenges that requires concerted efforts for effective and sustained prevention.An estimated 1.2million people are killed in road crashes every year and as many as 50million suffer injuries. The world health organisation believes that these figures could increase by more than half over the next 20years unless there is a firm commitment to road safety and accident prevention, especially in Nigeria,  most adults will know of someone who has been killed or injured in a road  traffic accident. It is a dead fact that many of these accidents and their consequences would have been avoided. Therefore the Computerised Traffic Offence System will help to keep records of all traffic offences committed by road users and also maintain the databases of the commission (FRSC).

COST:This is the greatest problem of ths Federal Road Safety Commission. The commission tends to lose alot of money running the agency manually.
DOCUMENT INTEGRITY:This is viewed in the contest of safety, in validity of the records in document files used in report generation. In terms of safety, the nature of the system makes it vulnerable to theft, fire or accidental destruction. This makes the system unsafe as the time needed to replace lost data or files is enormously large.

1.3 PURPOSE OF THE STUDY

This study is designed to help Federal Road Safety Commission to document all road traffic offences incurred by the road users.This study also tries to give an in-depth look in the easiest and most effective way for the growth and development of the Federal Road Safety Commission of Nigeria, in order to control and render its services to Nigerians and other countries.

With the growth in information technology, the study offers numerous values to the Federal Road Safety Commission and any organisation that deals with offence documentation data/information. Huge files kept through the manual method in offices will no longer be there again because information will be stored on the computer with the help of the Computerised Traffic Offence
System. It will help to keep a comprehensive record of traffic offence documented.

1.5 OBJECTIVES OF THE STUDY

The objectives of the study are as follows:
 To provide better services to the public and users making the highway safe for motorists and other road users.
 To keep records that are complete, integrated and up to date, also recommending works and devices designed to eliminate or minimize accidents on the highways and advising the Federal and State Government including the Federal Capital Territory Administration and relevant governmental agencies on the localities where such works and devices are required.

 To produce a system where information and output report will be produced or made available much faster, more accurately and more detailed to the commission and the public by educating motorist and members of the public on the importance of discipline on the highway.
 Maintaining the validity period for drivers’ licences which shall be three years subject to renewal at the expiration of the validity period as well as designing, registering and producing vehicle plate number.
 Conducting researches and also the standardization of highway traffic codes.

This study is strived at finding out how effective the Computerization of Nigerian Road Safety Commission will improve the operation of the commission. However, the research is limited to traffic offence section.

Owing to the scope of this project as mentioned above, this project work is limited to computer literates. It is important to mention that time and cost was a major constraint in the course of fact finding. It is also wise to mention here that some information needed to work with was not collected because of the unwillingness of the agency to reveal such information.