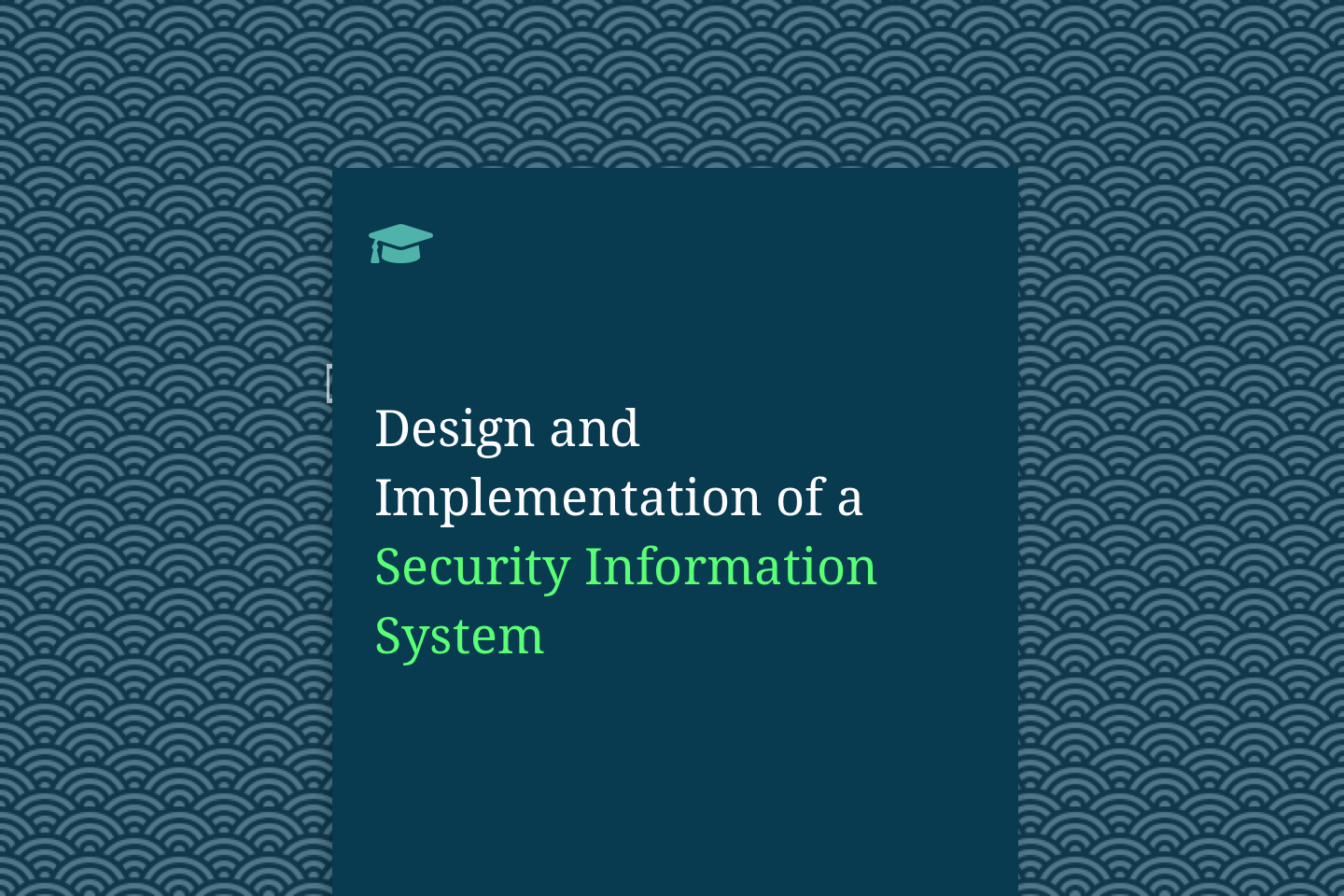 Design and Implementation of a Security Information System

The principal objective of this project is to help Security Information Systems (SIS) especially NIGERIAN POLICE which is my case study in the area they encounter problems in securing security data-processing and efficient information system. This will be the solution given to handle this problem by transforming the existing manual information system into an automated form and overcome the existing problems of insecurity and delay in data processing. I decided to use an automated database system to enhance information storage and keep track of security information. Again, doing this will ensure that there is an effective security information system computerization. To achieve this, Visual Basic 6.0 is used for its implementation.

National security is the requirement to maintain the survival of the state through the use of economic, security operatives especially police, political power and the exercise of diplomacy. The concept developed mostly in the United States of America after World War II focusing on the police and military might. Now, it encompasses a broad range of facets, all of which impinge on the police and military for economic security of the nation, lives property and values protected by national society. Accordingly, in order to possess national security, a nation needs to possess economic security, energy security, environmental security, etc. Security threats involve not only conventional foes such as other national states but also non-state actors such as violent non-state actors, narcotic cartels, multinational corporations and non-governmental organizations; some authorities include natural disasters and events causing severe environmental change in this category.
The origin of the modern concept of “national security” as a philosophy of maintaining a stable nation state can be traced to the peace of Westphalia, wherein the concept of a sovereign state, ruled by a sovereign, became the basis of a new international order of nation states.
As an academic concept, national security can be seen as a recent phenomenon which was first introduced in the United States after World War II, and has to some degree replaced other concepts that describe the struggle of states to overcome various external and internal threats. The struggle of states to overcome various external and internal threats. The earliest mention of the term national security, however, was made in Yale University in 1790 wherein was made to its relation with domestic industries.
The concept of the national security became an official guiding principle of foreign policy in the United States when the National security Act of 1947 was signed on July 26, 1947 by the U.S. President Harry S. Truman. Together with its 1949 amendment, this act create American national security d important facets for American national security as the precursor to the department of defense, subordinated the security operatives branches to the new cabinet level position of the secretary of defense, established the National Security council and the Central Intelligence Agency. The Act did not define national security which was conceivably advantageous as it’s ambiguity made it a powerful phrase to invoke whenever issues threatened by other interests of the state, such as domestic concerns, came up for discussion and decision making.
The realization that national security encompasses more than just security was present though understated, from the beginning itself.
The US National Security Act of 1947 was set up “to advise the president on the integration of domestic security and foreign policies related to national security”.
Gen Maxwell Taylor’s essay of 1947 titled “The Legitimate claims of National Security” has this to say;
The national valuables in this broad sense include current assets and national interests, as well as the sources of strength upon which our future as a nation depends. Some valuables are tangible and earthly; others are spiritual or intellectual. They range widely from political assets such as the Bill of Rights, National Security and political institutions and international relations to many economic assets which radiate worldwide from a highly productive domestic economy supported by rich natural resources. It is the urgent need to protect valuables such as these which legitimizes and makes essential the role of national security.

The general objective of the study is to develop a database for security information storage and retrieval.
Specifically, the following objectives are also considered:

Policing: Policing is another way of depicting the police.
Anti-policing: Anti-policing is the society’s social attitude opposed to war between states and in particular countering arguments based on policism.
Databases: A systematically arranged collection of computer data, structured so that it can be automatically retrieved or manipulated. It is also called a databank.
National Security: The requirement to maintain the survival of the nation-state through the use of economic, policing, and political power and the exercise of diplomacy.
Information Security: means protecting information and information systems from unauthorized access, use, disclosure, disruption, modification, perusal, inspection, recording, or destruction.
Classified Information is sensitive information to which the access is restricted by law or regulation to particular groups of persons.
Security Management is a broad field of management related to asset management, physical security and human resource safety functions.

Design and Implementation of a Computerized Database System for Outpatient