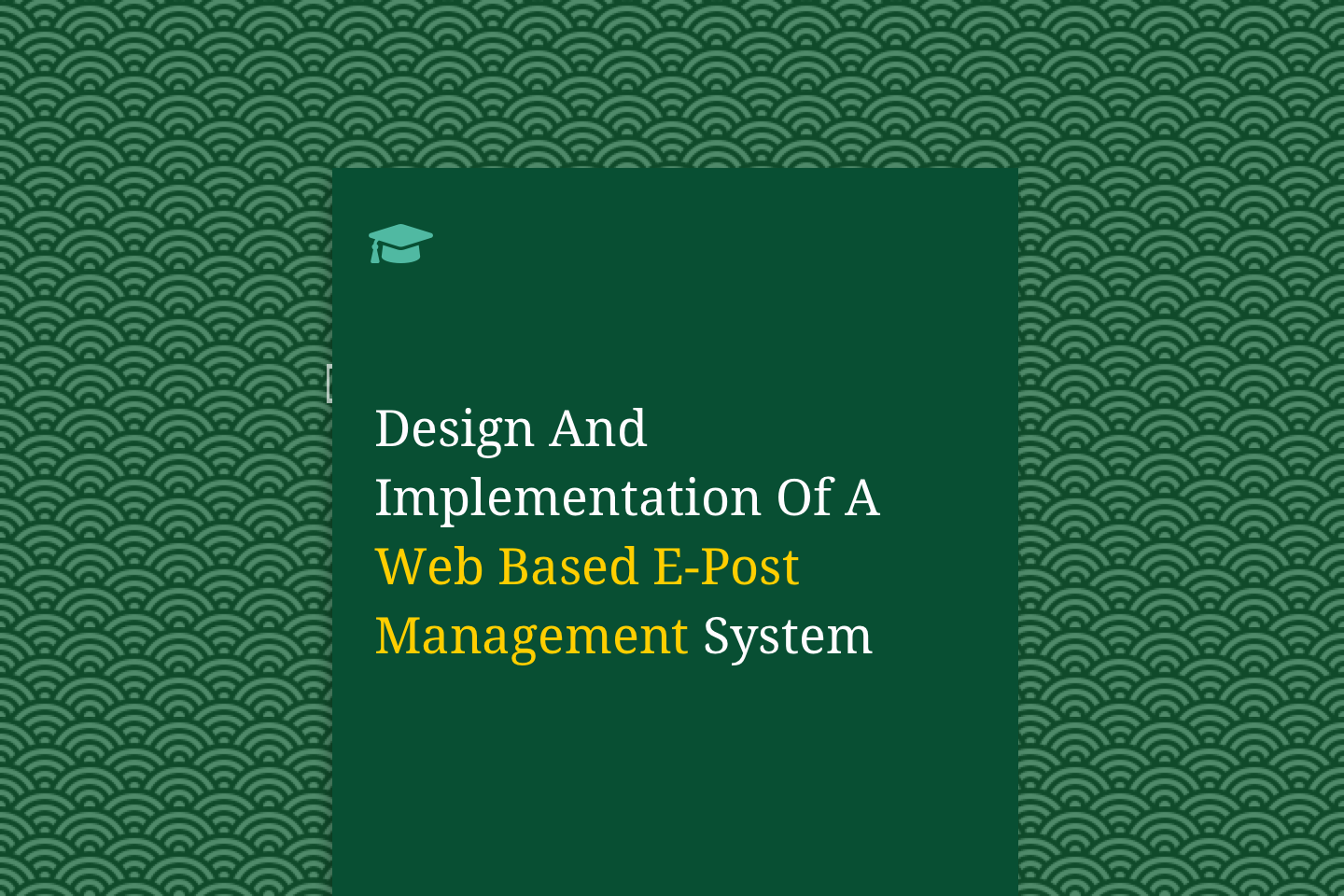 Design And Implementation Of A Web Based E-Post Management System

A courier service is an organization which offers special deliveries of packages,  money, documents or information. Courier services usually boast faster deliverytimes than any alternative method of transporting documents, and many services in the modern world rely on it. The idea of couriers and a courier service has been around almost as long as civilization, with rulers in antiquity using couriers as a means to make new laws and edicts known throughout their lands. In the modern age of international business, the courier service has become a keystone of enterprise, even as emerging technologies such as the fax machine  and Internet have rendered them less useful in some areas. The largest courier service in the world is the United Parcel Service (UPS), which delivers more than 12 million packages globally each day. UPS had its roots as a courier service in the beginning of the 20th century, when it was known as the American Messenger Company. UPS survived the depression and the World Wars, and went on to thrive in the global age. Throughout the years it acquired other courier services, including the Motorcycle Messengers and a number of smaller European companies.

Federal Express (FedEx) and Dalsey Hillblom Lynn, now Deutsche post AG (DHL) are other well-known global examples of the courier service, both with their roots in the early 1970s. Though not nearly as large as UPS, each company controls sizable portions of the  market. FedEx is particularly well-respected for its overnight courier service, the first of its kind. DHL originally focused exclusively on the route between Honolulu and San Francisco in the United States, but grew to encompass the Pacific Rim and spread to Europe and the Middle East.

Smaller courier services abound, particularly in cities. This type of courier service finds its niche in smaller packages and documents which need to be transported from one location in a city to another as quickly as possible. Couriers in these companies often ride bicycles or motorcycles in order to achieve the shortest turnaround times from pickup to delivery. Indeed, the bicycle messenger, whizzing through crowded traffic at unbelievable speeds with a satchel over one shoulder, has become a symbol of the youthful daredevilry of city life. In recent years, with the emergence of more sophisticated communications technologies and harsh price competitiveness, the number of bicycle couriers in most cities has decreased significantly, but the market remains strong for those who continue to work.

There is also a type of courier service which utilizes the extra baggage allotment of airline passengers to transport documents quickly and easily, with less hassle, through the Customs office of a country. These courier services offer greatly discounted fares on commercial tickets to foreign locations in exchange for the use of the passenger’s baggage space. The passenger is then given all the requisite paperwork, which they simply deliver to the Customs agent at the receiving end. Though technology has replaced many traditional uses of the courier service, there still exists a constant need to transport physical goods and documents over both short and long distances as quickly as possible.

Keeping record of parcels in a courier service company and their delivery information is carried out manually. A lot of files are opened for daily record of parcels received or delivered. This litters the office with much paper documents. Most often records are misplaced and when a client comes to collect his parcel, he\she spend some hours waiting for confirmation of the parcel. Hence delay is bound to occur while delivering parcel to customers. Also, customers must visit the post office before they can purchase stamps or any other item.

1.3 OBJECTIVES OF THE PROJECT

The objectives of this project are as follows.

1.4 SCOPE OF THE PROJECT

The scope of this project covers all details of a typical e-post application, with emphasis on the front-end portal but excludes the gateway application implementations and technologies. The gateway end which is a very secure epayment environment is often times built using SSL protocol, which can be procured from the gateways companies and integrated to the e-commerce site to support online, onsite payment management. However we have chosen to incorporate a demo copy of the gateway end to showcase its activities for the audience to appreciate such integration.

The advantages of e-commerce for business entities can be summarized thus: ecommerce can increase sales and decrease costs. A firm can use e-commerce to
reach narrow market segments that are widely scattered geographically. The internet and the web are particularly useful in creating virtual communities that become ideal target markets. A virtual community is a gathering of people who share a common interest, but, instead of this gathering occurring in the physical
world; it takes place on the internet. So the e-post management system developed will assist courier Service Companies to:

The project is organized as follows;-

Chapter three discusses methodology and system analysis. It deals with the approach used for the project, tools used, information gathering, data analysis
and limitations of the existing system.

Chapter four covers the system analysis and design. It highlights the project modules, system and program flow charts, and the database design.

Chapter six covers the summary and conclusion of the project.

Courier: A courier is a person or company employed to deliver messages, packages and mail.

Database: A systematically arranged collection of computer data, structured so that it can be automatically retrieved or manipulated. It is also called databank. File

Transfer: Any kind of computer file can be sent via the Internet from one Internet user to another. Table of accounts on spreadsheets, design by a graphic artists, music sound files etc, can all be exchanged in this way.

Design And Implementation Of A Medical Diagnostic System