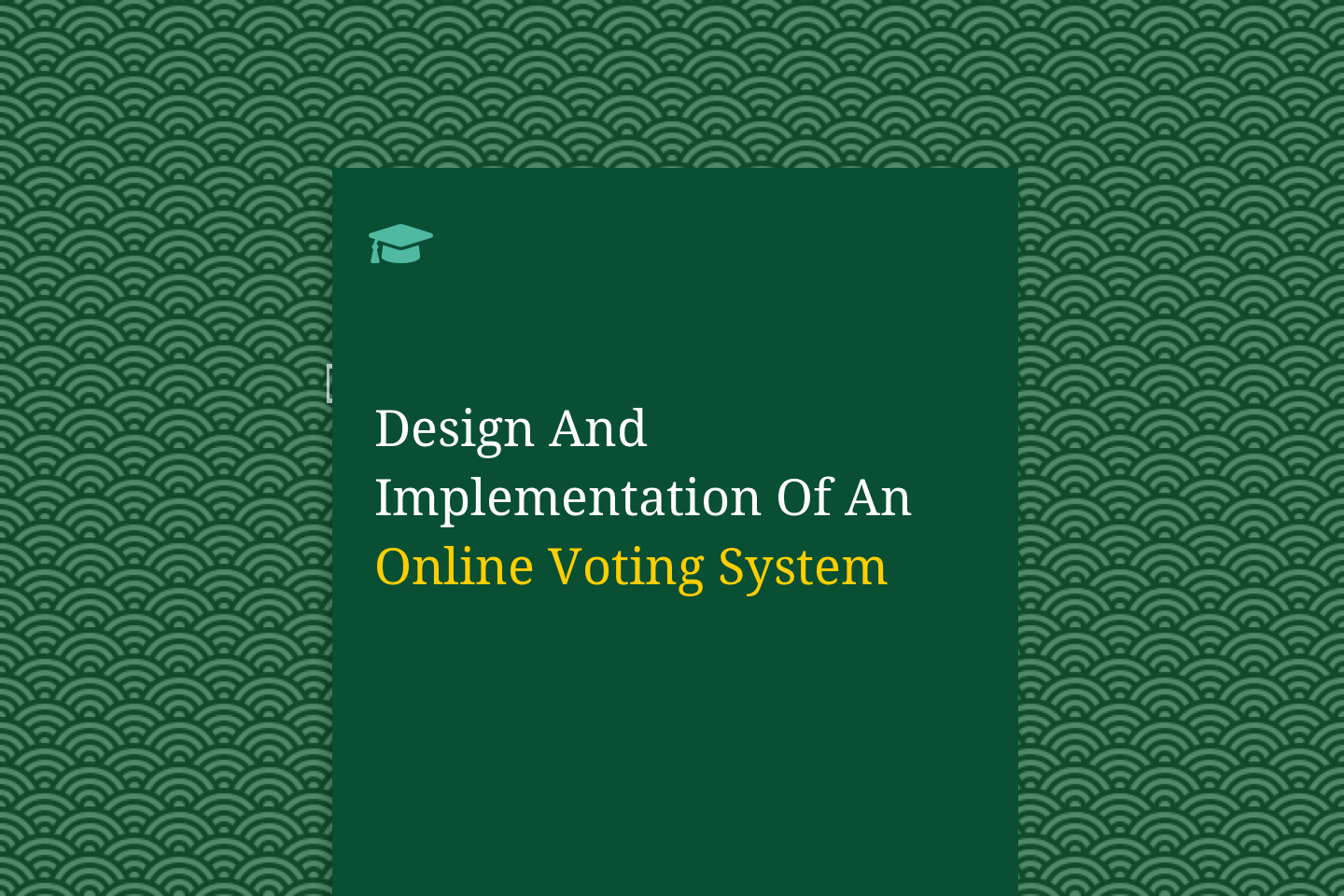 Design And Implementation Of An Online Voting System

The federal republic of Nigeria comprises of 36 states, The federal capital territory (FCT), and 774 local government areas (LGAs). The country is located in west Africa and shares land borders with the republic of Benin in the west, Chad and Cameroon in the east and Niger in the north. The three largest ethnic groups in Nigeria are the Ibo, Hausa and Yoruba ethnic groups.In Nigeria, General elections are conducted every four years, where a head of state the president and the national assembly representatives are elected. They are elected by the people. The national assembly has about 360 members representing various constituencies.

Most African electoral bodies with no exception to INEC, even with the advancements of technology, still use primitive paper based methods during voting; this system is characterized by manual form filling to chose leaders and transfer of information from manual data capture forms to computerized datasheets, this has led to a high number of mistakes making their way into the final votes count. The main advantage of the paper based system is the ballot papers are easily human auditable. The disadvantages outweigh the advantages for instance printing of ballot papers is slow, expensive, inflexible, environmentally hostile and also literacy limitations and last minute changes to  the voter register are difficult to accommodate among others. Over the last few years some election observers have suggested the introduction of electronic voting at state and federal level. The online voting system mainly addresses the voting phase. Electronic voting process using the online voting system should be cheaper than the present paper based system been used by the independent national electoral commission (INEC). Online voting is an electronic way of choosing leaders via a web driven application. The advantage of online voting over the present manual system is that the voters have the choice of voting at their own free time and reduced congestion. It also minimizes on errors of vote counting. The individual votes are submitted in a database which can be queried to find out who the aspirants for a given post has the highest number of votes.
With the online voting system , a voter can use his/her voting right online without any difficulty. He/she has to register as a voter first before being authorized to vote. The registration should be done prior to the voting date to enable data update on the database.

The election process begins from voters registration. The method adopted during voters registration goes a long way to determine the freeness and fairness of the election. In Nigeria, voting/registration process is very cumbersome. So many cases, missing data in the voter registration file have been reported. There  are also situations where unregistered voters flock to the polling station to participate in the voting process. Even after voting, malicious clerks and officers- in – charge of a polling station end up playing with the result figures.

The aim of this project is to develop a database for voter’s registration which will in turn help government to conduct a free and fair election using electronic machines.
To replace the current inefficient manual system of voting in Nigeria.
To ensure credibility in elections by preventing double voting, Help the government reduce the huge costs incurred in conducting elections.

The research work is designed to enable National Electoral Commission to use electronic device to capture voter’s information. The design will cover some security issues like authenticating the nationality of the voters through integrating the national ID database to the voter’s registration process and also capturing the picture of the electorates for validation during election.

During the design of this project work, much finance was required and owing to the financial meltdown globally, the research was limited by finance and hence concentrated on the available materials within the locality.

In view of the rapid development of computer technology in virtually all fields
of operation and its use in relation to information management, it has become
important to look into the development of electronic voters registration system
to enable government to achieve the following:
(a) Conduct free and fair election
(b) Safeguard data and information in the system.
(c) Reduced workload in the process of conducting election
(d) Keep accurate record of votes
(e) Reduce time wasted in announcing election result
(f) Eliminate disenfranchising electorates.

This project was covered under five stages:
CHAPTER 1; Deals with the introduction. The background of the project is discussed. The objectives of the project, its significance, scope, and constraints are pointed out.
CHAPTER 2; This chapter is a Review of Voters Registration in Some Countries and the literature review.
CHAPTER 3; Discusses system Investigation and Analysis. It deals with detailed investigation and analysis of the existing system and problem identification.
CHAPTER 4; Treats the system design and implementation
CHAPTER 5; The summary and conclusion of the project are finally
treated in this chapter.

voting system: is a method by which voters make a choice between options, often in an election or on a policy referendum e-voting: also known as electronic voting is a term encompassing several different types of voting, embracing both electronic means of casting a vote and electronic means of counting votes.
Information System: It is a collection of procedures, people, instructions and equipment to produce information in a useful form Technology: It is study of techniques or process of mobilizing resources (such as information) for accomplishing objectives that benefit man and his environment Computer Network: is a system that connects two or more computers together using a communication link. Databases: A systematically arranged collection of computer data, structured so that it can be automatically retrieved or manipulated. It is also called databank.

Design And Implementation Of A Web Based Office Management System

Design And Implementation Of A Computerized Traffic Offence System