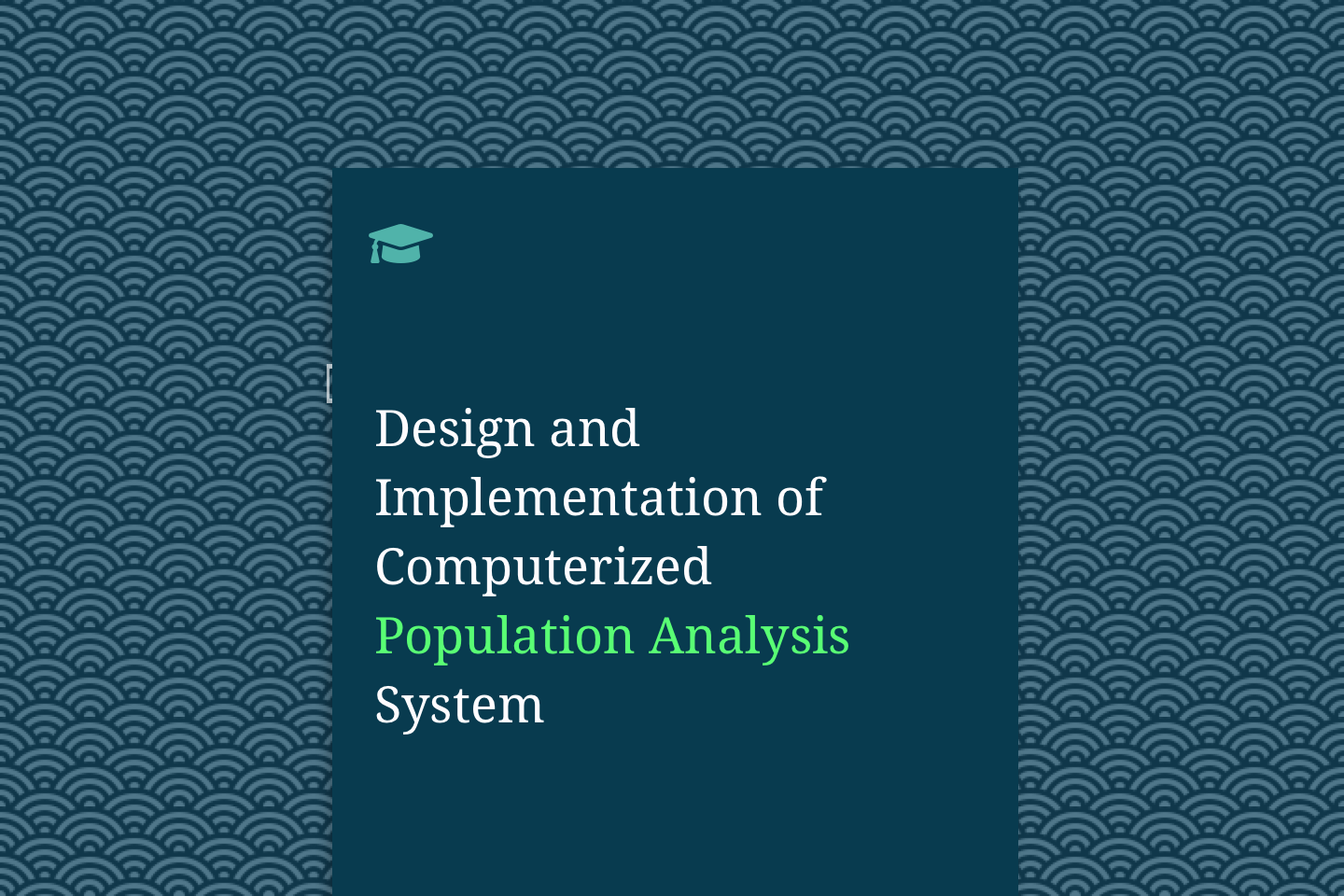 Computerized based spec analysis system includes the sets of methods that allow us to measure the dimensions and dynamics of populations. These methods have primarily been developed to study human populations, but are extended to a variety of areas where researchers want to know how populations of social actors can change across time through processes of birth, death, and migration. In the context of human biological populations demographic analysis uses administrative records to develop an independent estimate of the population. Computerized based spec analysis system estimates are often considered a reliable standard for judging the accuracy of the census information gathered at any time. In the labor force demographic analysis is used to estimate sizes and flows of populations of workers; in population ecology the focus is on the birth, death and movement of firms and institutional forms, the software is created and design with visual basic 6.0

Demography is the statistical and mathematical study of the size, composition, and spatial distribution of human populations and how these features change over time. Data is obtained from a census of the population and from registries-records of events like birth, deaths, migrations, marriages, divorces, diseases, and employment. To do this, there needs to be an understanding of how they are calculated and the questions they answers which is included in these four concepts: population change, standardization of population numbers, the demographic bookkeeping equation, and population composition.
Population change is analyzed by measuring the change between one population size to another. Global population continues to rise, which makes population change an essential component to demographics. This is calculated by taking one population size minus the population size in an earlier census. The best way of measuring population change is using the intercensal percentage change. The intercensal percentage change is the absolute change in population between the censuses divided by the population size in the earlier census. Next, multiply this by 100 to receive a percentage. When this statistic is achieved, the population growth between two or more nations that differ in size, can be accurately measured and examined.
For there to be a significant comparison, numbers must be altered for the size of the population that is under study. For example, the fertility rate is
calculated as the ratio of the number of births to women of childbearing are to the total number of women in this age range (multiplied by 1000). If these adjustments were not made, we would not know if a nation with a higher rate of births or deaths has a population with more women of childbearing age or more births per eligible woman.
Within the category of standardization, there are two major approaches: direct standardization and indirect standardization. Direct standardization is able to be used when the population being studied is large enough for age-specific rate are stable. Indirect standardization is used when a population is small enough that the number of events (births, deaths, etc.) are also small. In this case, methods must be used to produce a standardized mortality rate (SMR) or standardized incidence rate (SIR)
Population composition is the description of population defined by characteristics such as age, race, sex or marital status. These descriptions can be necessary for understanding the social dynamics from historical and comparative research. This data is often compared using a population pyramid. Population composition is also a very important part of historical research. Information ranging back hundreds of years is not always worthwhile, because the numbers of people for which data are available may not provide the information that is important (such as population size). Lack of information on the original data-collection procedures may prevent accurate evaluation of data quality.

Owing to:
The need arise for the development of computerized based spec analysis system for national population commission Enugu.

1.3 PURPOSE OF THE STUDY

The main purpose of this study is to eliminate errors involved in demographic data/information. This is actualized by designing computerized based spec analysis system for national population commission Enugu which is user friendly and interactive. By the time this software is designed and implemented, the difficulties encountered with manual method of keeping demographic information will be eliminated.

With the growth in information technology, the study offers numerous values to the national population commission Enugu.
Huge of files kept in the offices will no longer be there again because information will be stored on the computer with the help of the database program.

1.5 OBJECTIVES OF THE STUDY

The aims and objectives of this project is listed below:

Owing to the scope of this project work as stated above, this project work is limited to computerized based spec analysis system for national population commission Enugu.
It is important to mention here that TIME, FINANCIAL, NON-CHALANT ATTITUDE OF THE STAFF.
Where major constraint occur ‟s in the course of fact finding. It is also wise to mention here that some information we need to work with were not collected because of some reason.

1.8 ASSUMPTIONS OF THE STUDY

One of the major assumptions made in this project work is that manual methods of processing demographic data/information are ineffective, time wasting, prone to error. It is also assumed that with the level of development in information technology, there is a serious demand to join this trend of information technology.
It is also assumed that computerized based spec analysis system for national population commission Enugu will motivate the staffs to work more with easy.

Abundance: is an ecological concept referring to the relative representation of a species in a particular ecosystem.
Population: density is a measurement of population per unit area or unit volume
Male: refers to the sex of an organism, or part of an organism, which produces small mobile gametes, called spermatozoa. Each spermatozoon can fuse with a larger female gamete or ovum, in the process of fertilization. A male cannot reproduce…
Female : is the sex of an organism, or a part of an organism, which produces ova (egg cells). The ova are defined as the larger gamete in a heterogamous reproduction system, while the smaller, usually motile gamete, the spermatozoon, is produced

Design and Implementation of a Security Information System