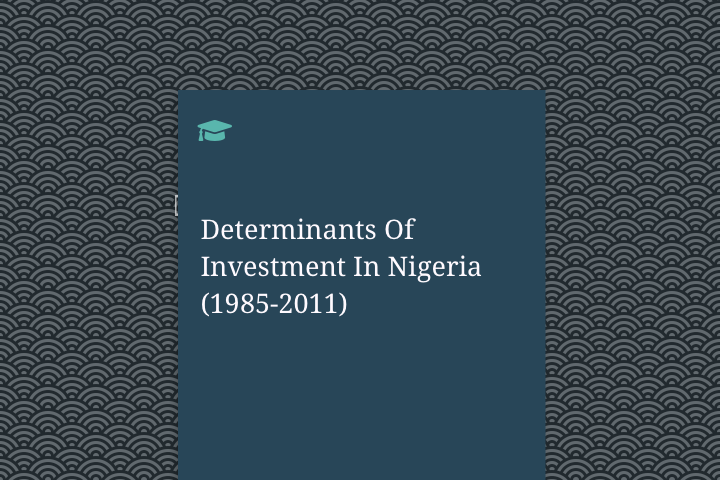 In recent times, there has been growing concern about the rising but volatile rate of investments in Nigeria. Thus concern stem from the fact that investment plays a dominant role in stimulating growth. The study buttress on the overview and empirical analyses into the determinant of investment in Nigeria in other to achieve the objective hypotheses which was stated with the purpose of achieving current and future stable and upswing of investment by readdressing problems of investment, as highlighted in the statement of problem. The study used investment as dependent variable and interest rate, inflation, foreign direct investment, degree of trade openness, gross domestic product, and money supply as independent variable. In analyzing the data, economic model of multiple regression using ordinary least square (OLS) techniques was employed. t- test was conducted to evaluate the significant of independent variables in the model not statistically significant at 5 percent level. Auto correlation and heteroscedaticity test were employed as the second order test.

The Nigeria economy has witness a slow pace growth of less 5 percent in the decades. Various reasons have been advanced to this development but the most apparent have been poor investment climate in the economy and this has been attributed to the low available investable funds. The stimulation of sustained economy growth requires a balance investment in physical and financial assets human and social capital as well as natural and environmental capitals. Nigeria has been classified as low saving and even lower investment economy (Ajakaiye 2002) one of the principal objectives of the Nigerian government under the 1999 democratic dispensation is fostering of sustained economic growth. Over the years, the government has been in the driver’s seat in growth the government economy. But lessons of experience have shown that government cannot regulate the economy effectively. A typical example has been the shift under the National economic empowerment and development strategy (NEEDS) which has recommended the need to  restructure and deepen the financial system.

Some economist like Mc Kinnon and Shaw (1973) said that rising investment alone is not sufficient enough to bring about growth and the role of financial institutions is very vital. In particular the new express of that the role of capacity fund is very critical to the success of any endeavor (World Bank 1998). In this regards, it is therefore important to investment the determinants to investment in economy in the past three decades. Banking sub sector in Nigeria has remained foreign in rural areas. But recently the establishment of community banks (now micro finance banks) has been, to Deepen their operation in rural areas. These banks with government assistance give loans and mobilize savings from rural areas for further investment in Nigeria.

In addition government have tried to provide necessary infrastructure in rural areas reduce the rate of rural- urban migration for the purpose of compelling the rural population to take agriculture to grater height as it was in past 38 years, however, the diversification of the various sectors of the economy has been the  main objective of the government. This is to increase employment which will increase income and saving for investment. But the process so far have not been adequate because of political instability and police inconsistence which range from corruption of political administrators and negative effects of transitional government. Diversification of different key sectors of the economy like agriculture and industry increase employment, incomes, consumptions, savings demand and generally, aggregate investment level that will broaden and Deeping the society standard of living. But dismissal growth record in most African countries relatives to other region of the world has been of concern to economist. (World bank, 1998).

This is because the growth rate registered in most African countries including Nigeria is often not commensurate with the level of investment. In Nigeria for instance, the economy witnessed tremendous growth in the early and late 1970(World Bank) as a result of the oil boom. This increased investment especially in the public sector, but with the collapse of the oil market prices in the early and mid-1980s 13 investment fill, thereby causing a fall in economic growth. For example, during the investment boom, gross investment as a percentage of GDP was 16.8% and 31.4% in 1974 and 1976 respectively ,where as it decline to 9.5 and 8.7 percent in 1984 and 1985 due to the depression (world bank). Although the rise in oil prices during the 1990-1991 periods was supposed to spark off an investment but that was not the case in Nigeria. The Nigeria military government for instance was inexperience in formulating economy policies and thus,left that task to bureaucracy (Idoko 1996).

The unit was that investment decisions which were undertaken with great decline, the government in 1986 adopted IMF World Bank structural adjustment programmer (SAP) with a view in providing stable macro-economic and investment environment. To this end interest rate that were previously fixed and negative in real terms were replaced by an interest rate regime which is driven by market force. The policy shift de-emphasized direct investment stimulation through low interest rate and encourages savings mobilization by decontrolling interest rate (World Bank 1996). Consequently, the objective of enhanced investment and  output growth was not realized as the countries investment failed to erase to anything near the level it has reached in the 1970s. Although successive government has implemented policies and strategies raising the level of savings and investments, this policy so far has been erratic as a result of the recent change in government as a result of political instability.

In addition, the experience of East Asia countries suggested that an investment rate of between 20 and 25 percent could endanger growth rate of between 7 and 8 percent. Strategically evidence reveals that output represented as the GDP in Nigeria shows a picture growth after the civil war, following the oil boom of the 1970 such that growth rate stood at 21.3% in 1971(Bage 2003). Therefore, for Nigeria to register increase in growth and development there is need to increase the private investment that will lead to higher growth, as was the case of Asian countries. Finally an analysis of domestic investment require a simultaneous link to GDP as aggregate factor interest rate and other unique variables that reacts to fluctuations in investment like debt ratio, business environment real exchange rate government expenditure and provision of infrastructure etc.

1.1 Statement of the Problems

Domestic investment in Nigeria has been constrained by numerous factors. These factors range from the following: Low capital stock: investment can never be successful if the capital is low The poor level of capital stock has been as a result of poverty which decreases domestic saving resulting from decline in real precapital inadequate infrastructure entrepreneurial activities is discouraged more by the absence of basic infrastructure like electrify, good roads and communication (Green 1991). Economic and social infrastructure are poverty developed in Nigeria thus domestic and foreign investors are way of investing in countries where basic requirement are inadequate political instability and policy inconsistency, due to the transitional nature of the Nigerian government investment have been derailed. Interest rate more inversely with investment that is as interest rate increase is falling investment rises. But Nigeria in interest rate of about 17.69 year ended 2006 did not account for upswing in 16 private investment because of inappropriate administration and poverty. The growth of domestic and external debt over the year has negatively affected the level of investment in Nigeria. Nigeria debt burden between 1980-2011 has effect for the economy and the welfare of the people. for example, Nigeria was owing the international community as act of 2007 was up to billion while (US) which could have been used for more allocation of basic requirement that would aggravate investment (Idoko 1966). Exchange rate fluctuation has also contributed to low propensity to invest in Nigeria by the foreigners. This is because of low manufacturing of export goods. Capital which would have ordinarily increased domestic exchange rate (Jhigan 2005). Therefore, instead of investing domestically the greater percentage of Nigeria’s proffer investing abroad where their money would manage effectively. Huge cost of raw materials and inadequate developed nature of domestic raw materials for investment. Therefore government should give incentives to encourage the investors give holding and reduction in duties changed during import of raw materials.

The study resolves around answering the following question:

What is the determinant of investment in Nigeria?

What is the relationship between inflation rate and investment?

1.3 Objective of the Study

1.5 Significant of the Study

The importance of the study lies in the fact that will provide an insight into the factors that determined investment in Nigeria.  It wills also further identity the reason why Nigeria investment efforts have not provided the desired results. It is to anticipate that this research work should be a source of reference to economic and social planners interested in the study of investment in Nigeria.