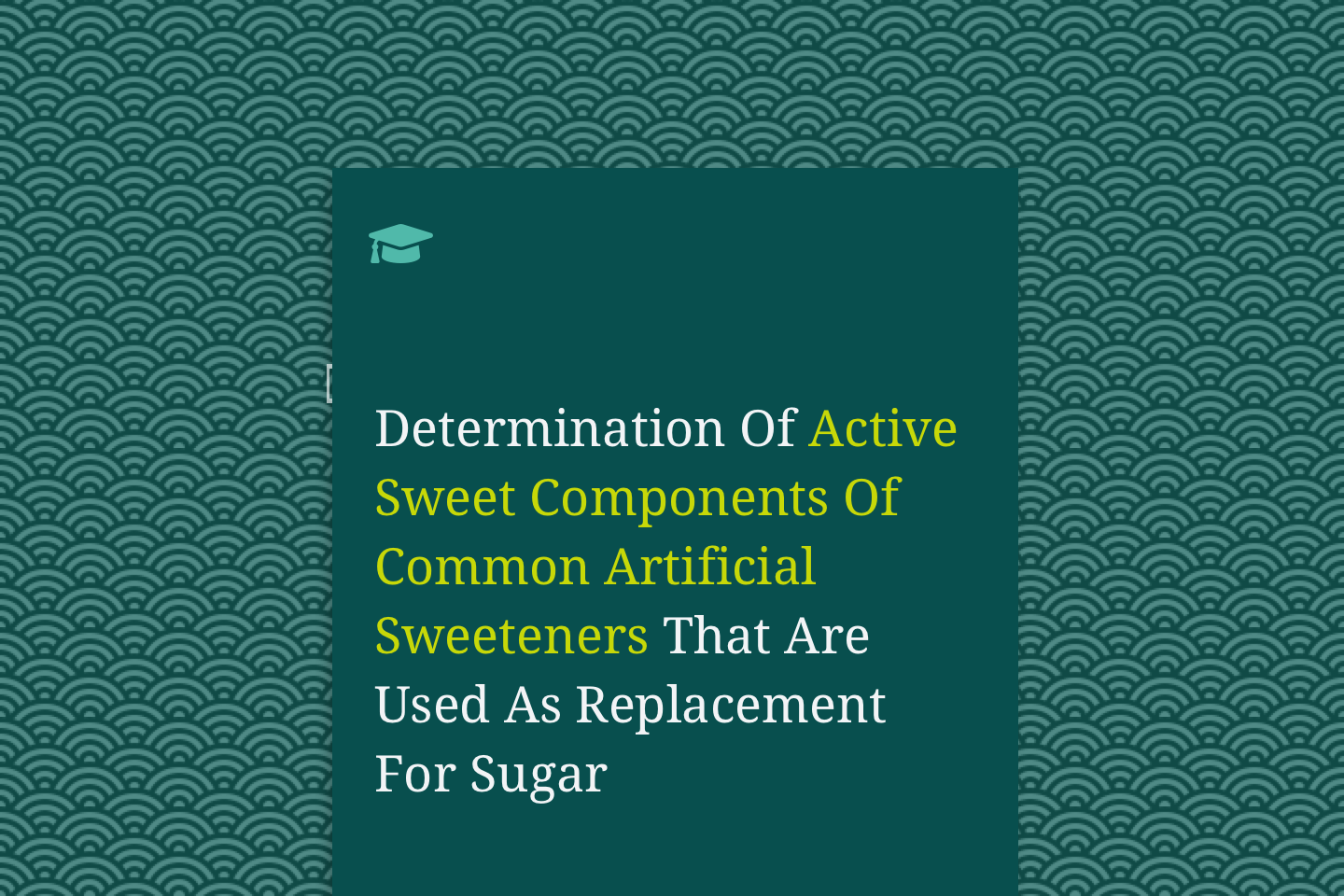 Sugar also known as sucrose comes from plants like sugar cane and sugar beets and is a carbohydrate. Sugar adds bulk to cakes, cookies and all kinds of treats; sugar also causes browning and caramelizing in foods when it is heated as when cookies turn golden brown in the oven sugar is a natural substance, something that our bodies can use for energy.

The last category of sugar substitutes is called natural substitutes. The categories include maple syrup, agave nectar and honey. These substances

are absorbed by our digestive system and contain calories and nutrients that our bodies can use. [Michelle 2002]

The chart lists some popular sugar substitutes and how they‟re commonly categorized:

AIM AND OBJECTIVES OF THE STUDY

AIM: To create an alternative to sugar by replicating the sweetnessfound in natural sugar.

Artificial sweetener mimicking the taste of sugar will be a better alternative to people who are suffering from diabetics. Unlike sugar, artificial sweeteners generally don’t raise blood sugar levels because they are not carbohydrates.

TABLE SUGAR (SUCROSE): Sugar was brought to the Americas by Christopher Columbus. At the time, sugar was processed by boiling the cane juice and then harvesting the crystals left behind after the water evaporated. These crystals contained protein, fiber, vitamins and minerals. Sugar is generally extracted from plants sugar beet and sugar cane or a main ingredient in many foods and recipes available as sucrose or saccharose (household sugar), lactose (milk sugar), fructose (fruit sugar), glucose (dextrose). [Abishak, 2009].

Raw sugar: It is interesting to note that raw sugar is already refined. Only sugars from evaporated cane juice can be classified as truly raw or unrefined sugars. Sugars can come from other sources as well such as beets and fruit, once the cane juice crystals are harvested; they are washed, boiled, centrifuged, filtered and dried. The purpose of this is to remove all the original plant materials (stalk, fiber etc.) to produce pure sugar

This process removes most of the fiber and nutrients that existed in the original crystals. The sugar then becomes refined and is now a food high in calories with little nutritional value.

Refined sugar: several centuries ago, refined sugars were expensive to produce and were also taxed at a higher rate. Refined sugar is derived from cane juice but is extremely processed with many of the natural enzymes, vitamins, minerals and fiber removed.

MECHANISM OF ACTION IN THE BODY

Sucrose is the organic compound commonly known as table sugar and sometimes called saccharose. A white, odorless, crystalline powder with a sweet taste. The molecule is a disaccharide composed of the monosaccharide, glucose and fructose. Glucose is a carbohydrate and is the most important simple sugar in human metabolism. In living organisms the oxidation of glucose contributes to a series of complex biochemical reactions which provide the energy needed by cells. The first step in the breakdown of glucose in all cells is glycolysis, producing pyruvate which is the starting point for all other processes in cellular respiration. In cells where oxygen is present (aerobic respiration) these processes have been modeled in the TCA cycle. A major part of the use of the energy from glucose oxidation is the conversion of ADP to ATP with the energy rich molecule. ATP being subsequently used as the energy currency of the cell. [Jeremy, 2013]

Sugar alcohols (polyols) are carbohydrates that occur naturally in certain fruits and vegetables, but they are also manufactured. They‟re not considered intense sweeteners, because they aren‟t sweeter than sugar. Infact, some are less sweet than sugar.

Tagatose is a low carbohydrate sweetener similar to fructose that occurs naturally but is also manufactured from lactose in dairy products.

Sugar alcohols generally aren‟t used when food is prepared at home, rather they are found in many processed foods and other product including chocolate, candy, baked goods etc. usually replacing sugar on an equal basis. When added to foods sugar alcohols add sweetness, bulk and texture.

DISAVANTAGES: There are many health concerns over sugar. Large amounts of sugar are required to make food sweet and because sugar contains a lot of calories, the body absorbs more calories and fat into its system. Similarly regularly eating food containing natural, refined or processed sugar increases the blood sugar intake and can result in type II diabetes, where the insulin in the body is inadequate to break up the amount of sugar in the bloodstream [Mayo, 2012].

To assist in weight loss: Some people chose to limit their food energy intake by replacing high energy. Sugar or corn syrup with other sweeteners having little or no food energy. This allows them to eat the same foods they normally would, while allowing them to lose weight and avoid other problems associated with excessive calorie intake.

Dental care: Sugar substitutes are tooth friendly as they‟re are not fermented by the microflora of the dental plaque. An example of a sweetener that can benefit dental health is xylitol. Xylitol works to prevent bacteria from adhering to the tooth surface thus preventing plaque formation and eventually decay.

Reactive hypoglycemia: Individuals with reactive hypoglycemia will produce excess insulin after quickly absorbing glucose into the blood stream. This causes their blood glucose levels to fall below the amount needed for proper body and brain function. As a result like diabetes they must avoid intake of high glycemic foods and often chose artificial sweeteners as an alternative.

Cost: Many sugar substitutes are cheaper than sugar. Alternative sweeteners are often low in cost because of their long shelflife and high sweetening intensity. This allows alternative sweeteners to be used in products that will not perish after a short period of time.[ Wikepedia,2013].

2.2.3 DIFFERENCES BETWEEN SUGAR AND ARTIFICIAL

For an artificial sweetener to mimic the taste of sugar, it must first be soluble in water. In addition, the molecule must be able to bind to a specific receptor molecule that is located at the surface of the tongue. This receptor, known as G-protein coupled receptor, triggers a sequence of events resulting in nerve signals carried to the brain. The presence of these signals is interpreted as sweetness by the brain. G-protein coupled receptors however are not limited to the tongue, these receptors are also found in the intestinal tract, and also present signals to the brain. These nerves do not go to the brain for no reason at all. The nerve signals from the intestinal G-protein coupled receptors instruct the brain that a certain type of food is in the intestinal tract. Specifically the presence of the signals originating from the intestinal tract is telling the brain that sugar has been consumed and will be absorbed shortly. Expecting a rise in blood sugar levels the biochemistry of the body reacts accordingly. When an artificial sweetener is consumed, the brain receives signals but the cascade of neurological and a biochemical event occurs nevertheless. In faking out the body‟s neurological and biochemical mechanisms, the body has been prepared to receive nutrients specifically carbohydrates but the nutrients never show up in the

bloodstream. No evidence can be found indicating that sugar substittes help people lose weight. In reality the opposite is true. Hunger is triggered by the hypothalamus, a gland in the brain. When a person gets hungry the hypothalamus is what initiates the hunger, causing the person to eat. If the person eats food containing an artificial sweetener the body‟s hunger mechanism is not satisfied, as a result the appetite is continuously stimulated until the nutritional demands of the body are finally satisfied. If other calories are found in the product containing the artificial sweetener these additional calories are most likely contributing to the body‟s fat reserves. [John, 2012].