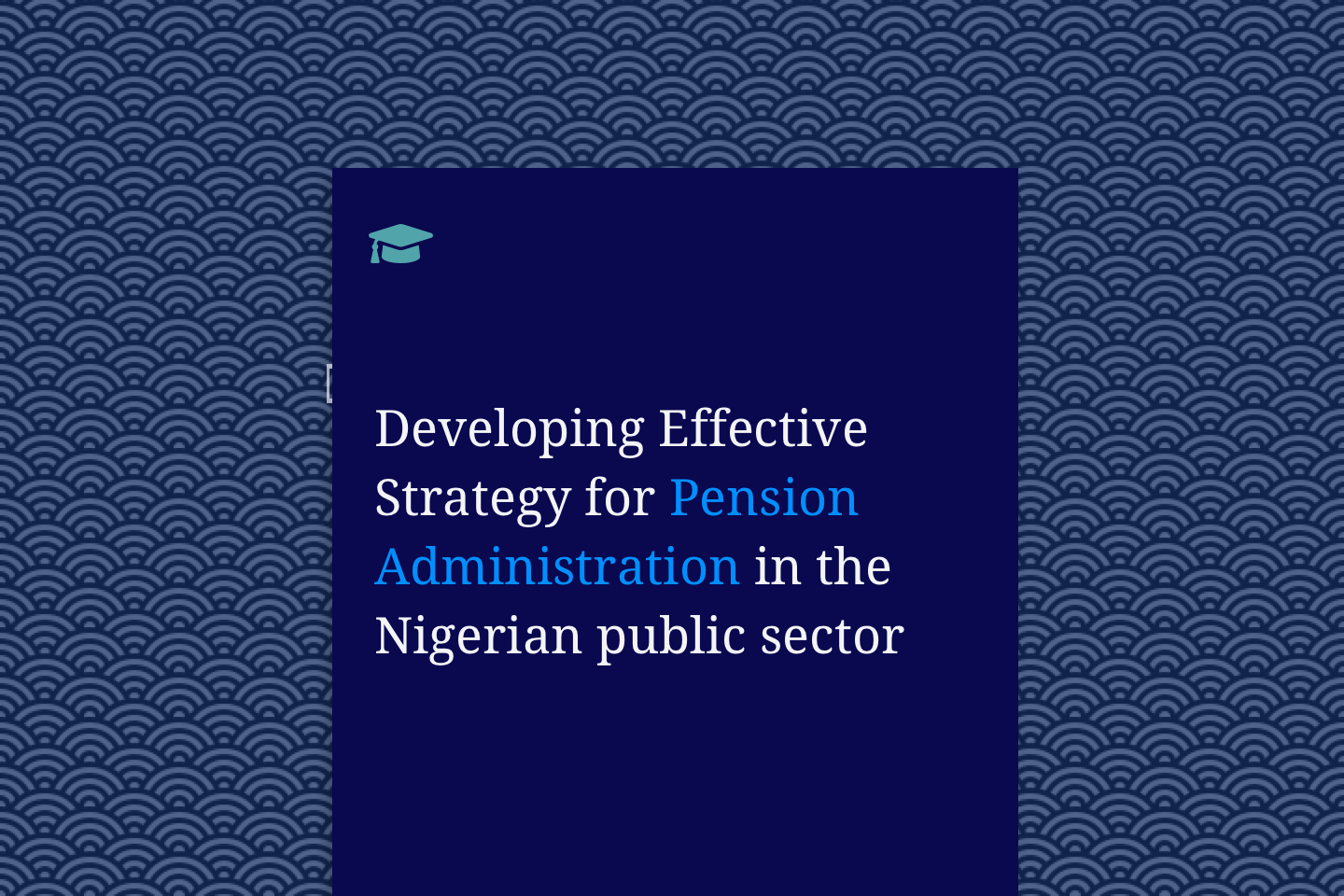 This research work is designed to develop effective strategy for pension administration in the Nigeria public sector, using pension commission as a study. The research work reveals how some retirees are forced to continue to work throughout their life, not out of choice but for lack of means of sustenance at old age. The sources of data collection for this work are primary and secondary sources, the researcher in this process of data collection for the research regarded the questionnaire to serve as the most important instrument used in the research, and the data gathered from questionnaire are analyzed by simple percentage, the chi-square techniques was employed to test the hypothesis and interpret the information for better understanding. The findings reveal that, a non- effective and efficient strategy of pension administration can be likened to poor pension administration and budgeted income to pensioners is not implemented as at when due. The implication were that, committees should be set up to audit the performance of pension boards and other pension bodies and responsibility should be assigned to the right people who must have access to the right information concerning retires and also retirees should not solely depend on pension after retirement, alternate plans should be made from day one of the start of one’s working years, this could include setting aside a percentage of one’s salary in anticipation of retirement.

The greatest challenge to government worldwide remains the issue relating to pension fund management. A financial analyst called Alexandra Forbes argues “Pension Management, world over, has become an increasingly great concern to most government and countries of the world”. And coming to Nigeria, the country was guided by a number of pension regimes prior to the promulgation of the pension Act 2004, pension schemes in Nigeria had been bedeviled with many pitfalls. The public service operated an unfounded defined benefit schemes and the payment of retirement benefits were budgeted annually. The annual budgetary allocation for pension was often one of the most vulnerable items in budget implementation in even where budgetary provisions were made, inadequate and untimely release of fund resulted in delays and accumulation of arrears of payment of pension rights. It is then obvious that, the defined benefit scheme could not be sustained.

In the private sector on the other hand, many employees were not covered by the pension scheme put in place by their employers and many other schemes were not funded. Besides, where the schemes were funded, the management of the pension funds was full of malpractices between the fund management and the trustees of the pension board.The scenario agitated a re-think of pension administration in Nigeria by the then President Olusegun Obasanjo`s administration, accordingly, the administration initiated a pension reform in order to address, eliminate and eradicate the problems associated with pension reform act 2004.

Good times come and go, retirement is definite, and the question therefore is “Can people still live a good life after retirement”? The non- implementation of budgeted income to pensioners, a non-effective strategy for pension administration is seemingly a growing problem in Nigerian economy. Some retirees are forced to continue to work throughout their life not out of choice but for lack of means of sustenance at old age. They are therefore forced to go in search of menial jobs to make ends meet, since they are not even sure of getting their pensions.

Apart from the stress associated with working at old age, how relevant can an individual be at age 70 or 80 in the face of ever changing knowledge brought about by advancement in technology? Besides, of what use is life without rest at old age? Even where one is willing and able to continue working, the opportunity for the elderly to continue working is declining. However, it is against this backgrounds that the researcher wishes to develop effective strategy for pension administration in the Nigeria public sector.

The aims and objectives of the study are to ;-

1. To proffer solutions to the problem that brings about a non-effective and efficient management in pension administration.

2. To identify measures and steps dealing with the issues of poor implementation of budgeted income to pensioners.

3. To examine the quality of personnel in various pension boards.

4. To ascertain whether the administration of pension funds are done judiciously.

For the purpose of the study, the following hypothesis were put forward;-

2. Hi : Non-effective and efficient management can be compared to poor pension administration.

Ho : The budgeted income to pension are not implemented as at when due.

Hi : The budgeted income are implemented as at when due

1. Can people still live a good life after retirement?

2. Why poor policy formation and implementation of pension benefits?

4. Does non-implementation of budgeted income to pensioner leading to pensioners protesting over non-payment of pension?

5. Does non-compliance with ethics of public financial management cause problem of pension?

Holistic change is required in order to create a framework that will enable consumers have a greater financial security at old age. This study signifies a whole lot; it is intended to find out the intrinsic and extrinsic cause of poor pension administration. The findings will hopefully:

1. Assist the researcher that although simple in nature will

a. Effect radical improvements in the administration of pension funds

b. Deliver significant benefits to all consumers when they retire.

2. Serve as a guide to public official in charge of this administration of pension funds to pensioners.

3. Assist the governments in setting priorities according to their social fiscal policies.

4. Enable providers of pension, plans quickly to improve the flexibility and appropriateness of today’s product.

However, it is the researcher’s belief that greater attention to ethical and social responsibilities will improve the way pension funds are managed and ministered.

This project work is concerned with an effective strategy for pension administration in Nigeria public sector. The work will be limited with pension commission (PENCOM) and with other relevant areas such as pension scheme for civil servants, pension governance, Nigeria Social Insurance Trust Fund, Contributory pension scheme.

1.8 LIMITATIONS OF THE STUDY

1. Developing effective strategy for pension administration in the Nigeria public sector (a study of pension commission) has not been an easy task due to inaccessibility to some relevant materials most managers of government prostrate perceived this research work as adding their companies thereby withholding vital information.

Consequently, some staff of the pension bodies was reluctant to discuss the subject freely.

2. Time factor is also another problem, which affected the compilation of this work, despite the high scheme in the school; period allocated for the project work must be strictly worked towards.

3. The incessant bombing in the country thereby posing everybody a prime suspect also was one of the limitations.

1. PENSION: is a fixed sum paid regularly to a person, typically given

2. PENSION FUND: is any plan, fund or scheme which provides retirement income.

Pension should not be confused with severance pay; the former is made in regular installments while the later is paid in one lump sum.

3. RETIREE: is one who has retired from active working life. Retirees receive pension.

4. GRATUITY: is money given to an employee in return for service(s) at retirement.

5. LUMP SUM: is a single payment for a number of separate items, money paid in full rather than in several smaller amounts.

6. ANNUITY: is any terminating stream of fixed payments over a specified period of time.

7. PENSION ADMINISTRATION: is the management of pension funds and fairs.

8. PRE-REQUISITE: is a thing required as a condition for some other things to happen or exist.

9. PUBLIC SECTOR: is the part of an economy concerned with providing basic government services. These include services such as Police, Hospitals, Schools, Military and Public transport.

The Impact Of Information Technology In Accounting System

The Impact of Accountancy Information on Decision Making Process