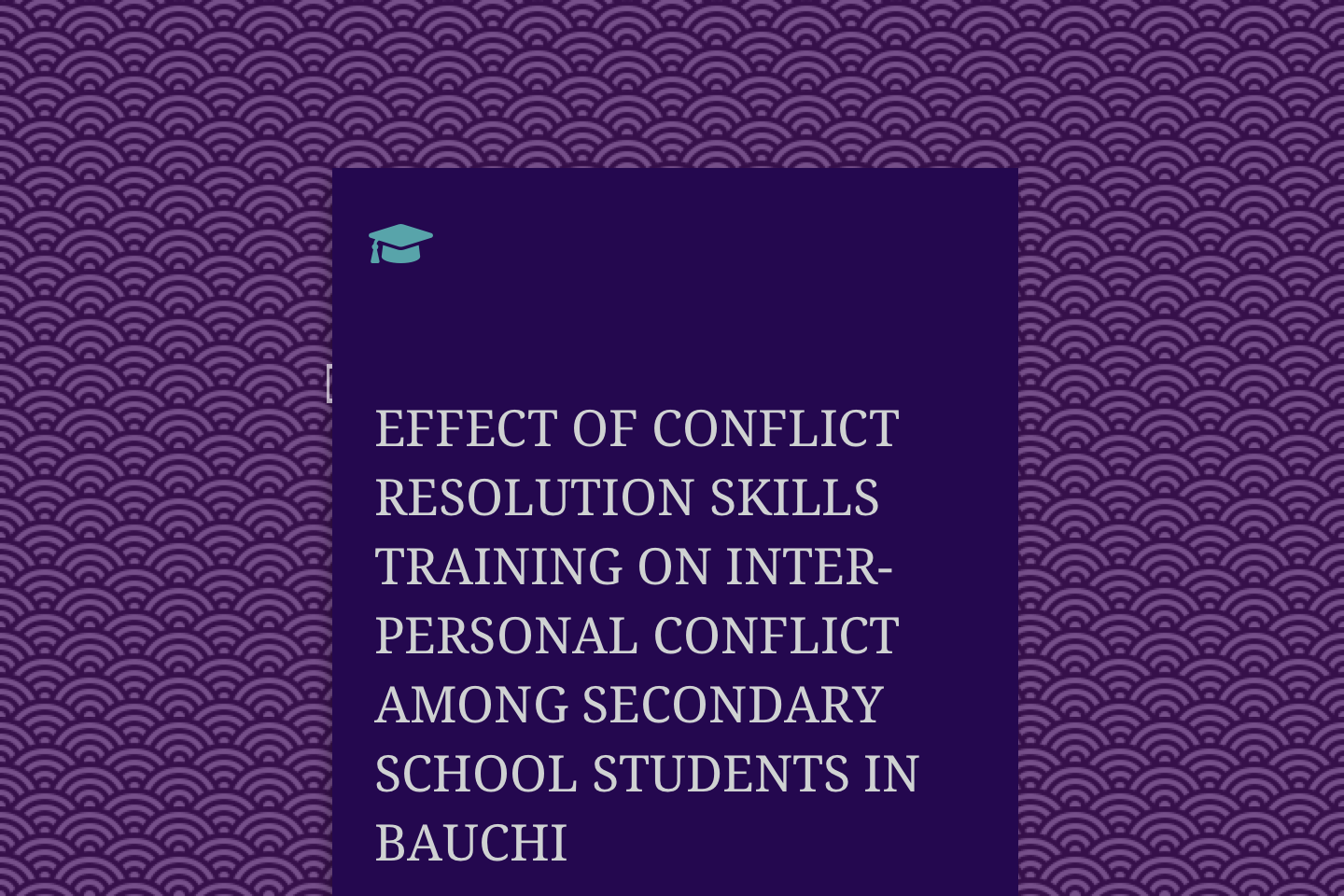 1.1 Background to the Study

School is a social unit established by government or members of the society as a formal agency of education where people learn about the custom, attitudes and ways of doing things in the society. Ifidon (2005) defined School in sociological context as the place where the culture of the people is transformed from one generation to another. Members of the wider society, including the operators of the educational system are governed by norms and laws that direct the affairs of an individual member. Such laws, according to Omotayo (2005) are meant to compel the entire members of the society to exhibit character that will conform to the societal laws and order. In order to ensure peaceful co-existence in schools, the authorities often make rules and regulations that guide and control the behaviour of their students with a view of setting high standards of discipline conducive to the education process.

Effective administration of Nigerian secondary school system, to a large extent, depends on a cordial and cooperate working relationship among principals, teachers, proprietors and students. The harmonious working relationship, mutual implementation of decisions, and peaceful academic environment will be jeopardized, if the school and members of the school community are often in conflict (Abanyam, 2001). Conflict is inevitable in any organization. It grows from simple to complex, from non-violent to violent depending on the gravity. Conflict is a situation where there is disagreement between two or more people.It can be intrapersonal, interpersonal, intergroup or intragroup. Zakari (2006) believed that interpersonal conflict can be simply described as a clash between two individuals who are unwillingly or unable to fulfill expectations of each other. Interpersonal conflict refers to the representation of incompatibility, disagreement, or difference between two or more interacting individuals Ofem (2008). David and Michael (1999) in their book defined interpersonal conflict as ―An expressed struggle between at least two interdependent parties who perceive incompatible goals, scarce resources, and interference from the other party in achieving their goals‖. Interpersonal conflict is an interaction of interdependent people who sense disagreement and opposing interests, incompatibility and the possibility of interference, and negative emotion from others.

Conflict resolutionskills training on the other hand is a more comprehensive term, which implies that the deep-rooted sources of conflict are addressed and transformed. This implies that behaviour is no longer violent, attitudes are no longer hostile, and the structure of the conflict has been changed. It is difficult to avoid ambiguity, since the term is used to refer both to the process (or the intention) to bring about these changes and to the completion of the process. A further ambiguity is that conflict resolution refers to a particular defined specialist field (as in ‗conflict resolution journals‘), as well as to an activity carried on by people who may or may not use the term or even be aware of it (as in ‗conflict resolution in Central America‘). Nevertheless, these two senses of the term are tending to merge.

Conflict resolution theories address the deep-rooted sources of conflict, which are taken to be structural (and therefore, in contrast to peoples‘ understanding of conflict, not discursive) and cultural. Different to conflict management where the cause of conflict is a consequence of the anarchical nature of the international system, conflict resolution theorists argue that conflict has an ontological base in human needs, the denial of which
causes violent conflict‘ Louis (1986). However, the process of dealing with conflict to achieve constructive rather than destructive results is essential. This process can be pursued in a variety of ways.

Interpersonal conflict is conflict that occurs between two or more individuals that work together in groups or teams. This is a conflict that occurs between two or more individuals. Many individual differences lead to interpersonal conflict, including personalities, culture, attitudes, values, perceptions, and the other differences. Conflict arises due to a variety of factors. Individual differences in goals, expectations, values, proposed courses of action, and suggestions about how to best handle a situation are unavoidable. This can happen in the secondary schools between students in the senior and that of the junior classes. It can also be among students of the same class. This can cause unnecessary punishments to be meted out to younger students and even make some of them to drop out of the school.It canalso cause significant emotional and physical harm and can lead to aggressive behaviours when youth lack the social skills necessary to cope
with their frustrations and finally affects their academic performance. Therefore, it is important to identify students who engage in interpersonal conflict andemploy some positive conflict resolution skills training for them in order to promote healthy living in the school.

Resolution is an act of finding a solution to problems or a conflict. Conflict Resolution SkillsTraining is therefore, a method desired to develop peaceful means of amicably ending a state of conflict. Since conflicts are inevitable, learning to deal with them in a healthy way is crucial. When this type of conflict (interpersonal) is mismanaged, it can harm the relationship. But when handled in a respectful and positive way, it canprovide an opportunity for growth and ultimately strengthening the bond between two people. By learning the skills needed for successful conflict resolution, one can keep his personal and professional relationships strong and growing. Intrapersonal conflict involves expression of strong emotions, disagreement over certain issues in school, clash over values, ideas, opinion or views. Interpersonal conflict occurs in schools among students which include tension, animosity, annoyance etc. others involves uncountable verbal and non-verbal behaviours which crop up each day in school create conflict that would require counselling. Teachers face difficulties in the classroom with talkative students who are not easily manage and their behavour can result to outburst of unacceptable behaviours that would require management before overwhelming the whole class. That is why the researcher employed conflict resolution skills training (avoidance, negotiation, withdrawal, give and take) to observe their effects on interpersonal conflict among secondary school students in Bauchi metropolis according to their age and gender.

The objectives of the study is to find out:

In line with the stated objectives, the following are the research questions:

The following hypotheses guided the study:

It is hoped that the outcome of the study would be significant to school counsellors and psychologists, teachers and school administrators, education policy makers, parents/caregivers and the students.

School counsellors and psychologists would benefit from the outcome of this study, as it would increase their knowledge of factors precipitating interpersonal conflict among secondary school students. Similarly, the school counsellors and psychologists would be acquainted with the proper counselling technique that is positively decreasing the behaviour understudy that is interpersonal conflict.Whenever faced with such problem among their clients, they would easily apply the skills to redress the problem.

Furthermore, the outcome of this study will help teachers and school administrators in understanding the negative impact of interpersonal conflict on the academic performance of the victim students. Also, it will help them to encourage and assist the students to acquire conflict resolution skills in order to achieve their maximum potentials and also improve their academic performance.

Educational policy makers who are concerned with issues of discipline and implementation of educational laws in schools will also benefit from the findings of this
study. Thus, their future policy formulation can feature some of these likely behaviour problem that could be exceptional when dealing with issues that has to do with administration of corporal punishment on offenders to the laid down school rules and regulations. So the outcomes of the study therefore can serve as a basis upon which special provision could be given to students with interpersonal conflict problem with the hope that the resultant effect of conflict resolution skills training would form new way of handling and managing students who exhibit interpersonal conflict at home and school.

The findings of the study arealso hoped to be of benefits to parents and caregivers as it would bring to light the important measures to take when dealing with conflict behaviour at home. To students, the finding will assist them to understand the negative effect of conflict among themselves on their academic performance.
Finally, it is hoped that the findings of this study when conducted will increase the body of knowledge, particularly in the field of behaviour modification and classroom management strategies; by demonstrating the importance of conflict resolution skills training in reducing interpersonal conflict among secondary school students. The study would be a point of reference to future researchers, who may wish to carry out further investigations on students‘ conflict behaviour by serving as a source of literature on the variables under study.

1.8 Scope and Delimitation of the Study

The scope of this study was to find out the effects of conflict resolution skills training (avoidance, negotiation and give and take) on interpersonal conflict among secondary school students in Bauchi metropolis. In light of the above therefore, the effect of conflict resolution skills training in reducing interpersonal conflict among secondary school students of SS IIin Bauchi metropolis was only considered. As such, students of SS I and III as well as junior secondary school students in Bauchi metropolis were not included in the study. Also, other problems such as truancy, Attention Deficit Hyperactivity Disorders, Autism, Mutism, speech impairment, shyness and other counselling skills and or techniques were outside the scope of this study. Additionally, the study used only male and female students who are within the age brackets of 14-17 and 18-21 years. Therefore, students above or below these age brackets even if in the same class were excluded.