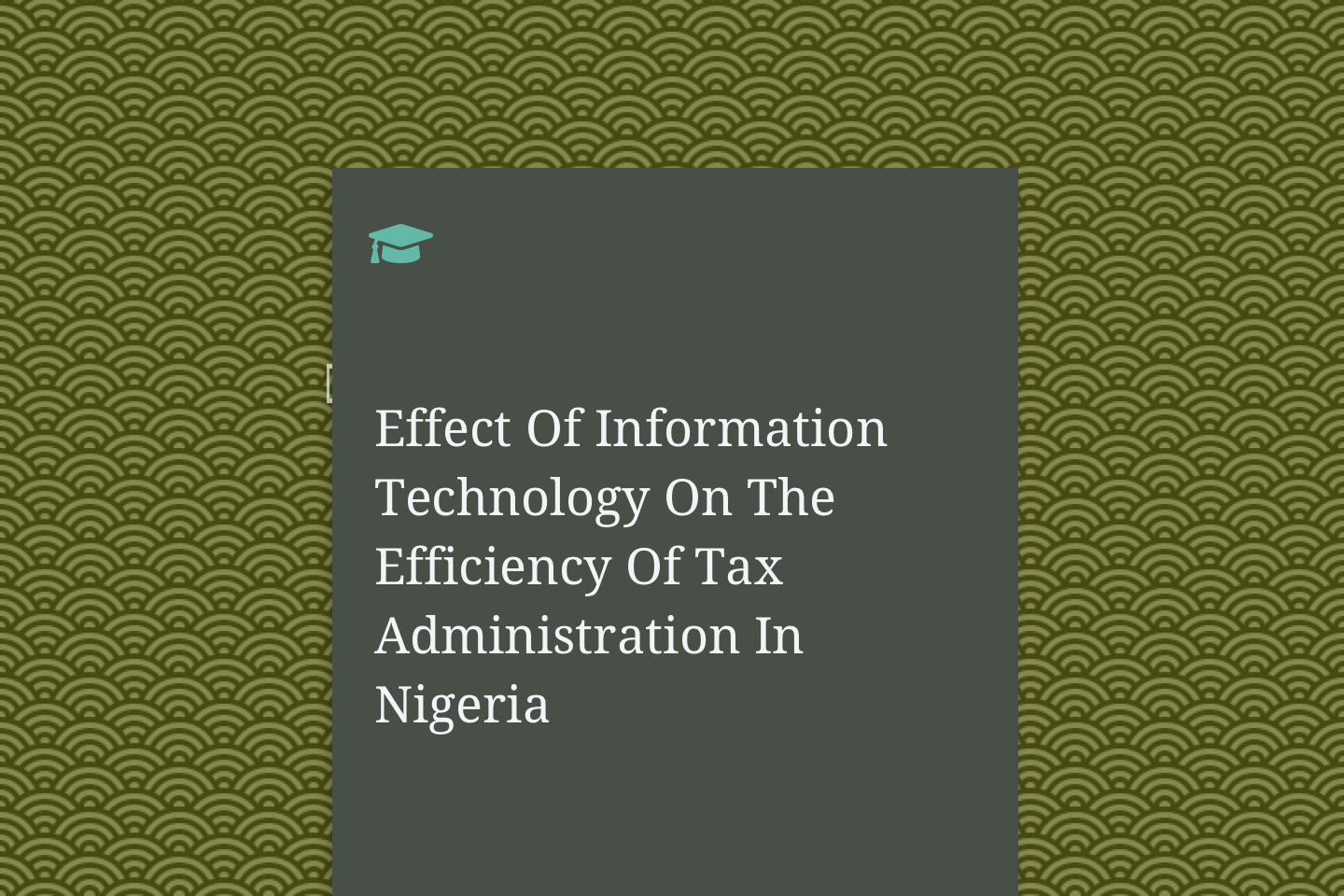 This research study examines the Effect of Information Technology on the Efficiency of Tax Administration in Nigeria, a case Study of Enugu State Board of Internal Revenue. Its main objective is to find out whether the application of Information Technology increases efficiency on tax administration. For the purpose of this study, the researcher adopted the method of survey Research Design. Data used in this research were gotten from both primary and secondary sources including questionnaires and textbooks respectively. These data were analyzed and presented in tables. Three (3) hypotheses were formulated and tested using the Analysis of variance (ANOVA) method. The findings of this research tend to show that effective tax administration resulting from the application of Information Technology leads to an increase in tax base as more potential taxpayers are drawn into the tax net when there is a conducive environment. It is recommended in this work that enlightenment campaign be made available for the masses and also adequate training for the tax officials on the use of modern technology

Taxation is one of the oldest and major sources of government revenue. The history of taxation in Nigeria dates back to the pre-colonial era. During this period, there were different systems of taxation existing in the forms of compulsory services, contribution of goods, money, labour and the likes, among the various kingdoms and ethnic groups and tribes controlled by the Obas, Emirs etc., in order to sustain the Monarch and also for community development (ICAN,2010)

Taxation, as we know it today, was first introduced in Nigeria in 1904 by the late Lord Lugard, when community tax became operative in the Northern Nigeria. He later made changes which culminated in the Native Revenue Ordinance of 1917. An amending ordinance that extended the provisions of the 1917 ordinance to Southern Nigeria was passed in 1918. The first ordinance applied to Abeokuta in Western Nigeria and to Benin-city in Mid-Western and in 1928, it was extended to Eastern Nigeria.

Taxation in Nigeria, in a modern sense, however, only began in 1940. A more progressive income tax Ordinance No.29 of 1943 Cap92, under which Europeans all over the country and Africans resident in Lagos were assessed, came into operation on the 1st of April, 1943.

The Commissioner, appointed by the Governor-General by notice in the Gazette (now referred to as the Federal Republic of Nigeria Gazette), was responsible for the administration of the ordinance. By the 1st Schedule, Ordinance 39/58, it was the Federal Board of Inland Revenue that took the place of the Commissioner (Ola, 1974).

In recent times, tax administration in Nigeria is vested in various tax authorities depending on the type of tax under consideration. Broadly, there are three (3) tax authorities, namely;

However, the organs of the Nigerian Tax Administration are listed below;

The enabling laws in respect of each type of tax will normally contain a provision as to the body charged with the administration of the tax. For this purpose, the various enabling tax laws are as follows;

According to Alhaji Kabir M. Mashi, a core success factor for any system is its position on administrative issues. Presently, the tax administration in Nigeria, Enugu state to be precise, has been riddled with various limiting factors such as;

The rapid growth and development of Enugu State led to an enhanced increase in population as well as an increasing number of companies. Tax planning and tax management have increasingly become complex activities due to growth in business and the subsequent expansion in scope of operations and fiscal size. Given the amount of data that needs to be analyzed in order to assess and compute tax liabilities, it has become imperative that both tax institutions and companies deploy appropriate computer programmes in order to enhance tax planning and administration. The advent of Information Technology in this era has played a major role in enhancing economic and business activities of both the private and public institutions. While it has opened up opportunities that have gone undiscovered or neglected, it has saved many organizations millions of perpetual fraud through its applications. The application of Information Technology has become increasingly necessary in Nigeria’s tax administration as the use of Information Technology makes for fast, easy and accurate computation, storage and presentation/ retrieval of data/ records.

Certain computer programmes have been created to facilitate the computation of cumbersome data. Programmes such as Microsoft Excel (Electronic Spread Sheet), Microsoft Access (Database) are one of the most common examples. Other database programmes and accounting packages which allow for easy calculation and computation of an individual or a company‟s tax liabilities include Peachtree Accounting, PeopleSoft System, SQL Database, QuickBooks, Management Information Processing System, Quikens etc.

Presently, the world has gradually become a global village and the nexus between Nigeria and the rest of the world is the use of Information Technology in, practically, every sector of the economy. Therefore, in order to improve on the efficiency of tax administration in Nigeria, it will be advisable to apply the use of Information Technology from the basics of tax collection to the final stage in Tax Administration.

In Enugu State, the tax institutions have not fully embraced the use of Information Technology for record keeping. According to BECANS Business Environment Report 1(15) (2007), there is evidence of a manually compiled database of tax payers. Manual Compilation involves the use of files/ folders for data storage. When records are stored in this manner over a long period of time, retrieval of such records can prove to be very difficult. Records stored in this manner can be very unreliable as these records are easily prone to manipulations

Another major problem can be found in the method of tax collection. The tax officials are often aggressive as they use unorthodox methods in tax collection especially at the local government level.

Furthermore, the identification of taxable persons has proven to be a herculean task using the manual systems

This research work is aimed at achieving certain objectives which are stated below:

Based on the objectives, the following researches were formulated:

H0– Effective tax administration does not lead to an increase in tax base.

H1– Effective tax administration lead to an increase in tax base. Hypothesis Two

H0– Inefficiency in tax administration does not create and avenue for tax evasion.

H0– The application of information technology does not increase efficiency in tax administration.

it is hoped that this work will form a major catalyst to stimulate the initiation of a proper legislative process that will regulate tax administration in Nigeria, particularly in Enugu State.

Finally, it is believed that the information generated from this research will enhance the tax payers awareness on tax issues like tax incentives and penalties for tax related offences such as tax evasion.

1.7    Scope And Limitation Of The Study

As this research work is focused on the effect of information technology on the efficiency of tax administration in Nigeria, with particular reference to Enugu State, the scope of the study will be limited to the activities of Enugu State Board of Internal Revenue

In the course of carrying out this research work, certain limitations were encountered, they include the following:

In order to avoid confusion surrounding the words, the following technical terms have precisely been defined, as they relate to the context of the research work.

Tax- An amount of money levied by a government on its citizens and used to run the government, country, a state, a county or a municipality/ local government.

Tax Evasion- This is an act whereby the taxpayer can achieve the minimization of tax through illegal means. It involves outright fraud and deceit.

Tax Avoidance- This arises in a situation where a taxpayer arranges his financial affairs in a form that will make him pay the least possible amount of tax without breaking the law. Ordinance- A law or rule made by an authority such as a city government.

Stakeholders- Those persons/ entities that contribute to, and derive  benefits  from,  the  country‟s  tax  system.  This  includes every   Nigerian    citizen    and    resident,    corporate      entities, government at all levels and government agencies.

A Comparative Study Of Expenditure Control Methods In Government And Privately Owned Hospitals.