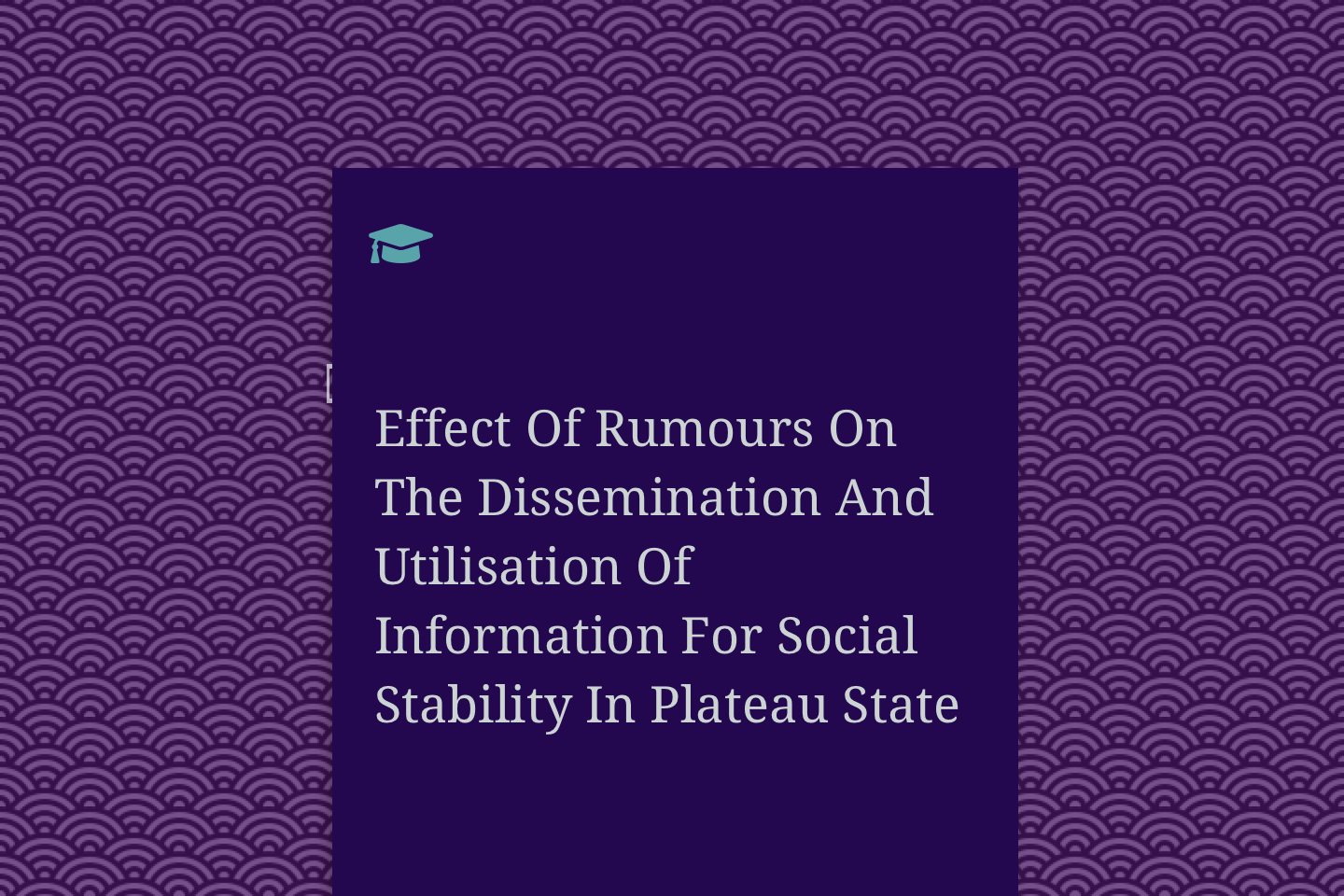 1.0 Background to The Study

The common challenge that all societies face is maintenance of social stability such that people can operate within the accepted norms and ethics. Social stability is essential for the attainment of growth and development of any society and establishment. It ensures stable running of institutions, societies, nations and countries (Labossiere, 2011). Social stability is simply the fulcrum of economic, social, cultural and political advancement of any human community. It is anchored on effective information dissemination on and about the activities taking place in government circles which have effect on the public.

Efforts have been expended by state and federal governments, non-governmental organizations, concerned and opinion leaders in the maintenance of social stability, in this regard; several scholars have explored the issue from economic, social, cultural, political, ethnic, and religious perspectives but despite their studies social instability is still perverse and recurrent around the globe (Sutton, 2013) Hence, in continuance in the arrest of the situation there is the need to look outside the box but keep the box in view. In order to keep the box in view this study sought and investigates the social instability in Plateau state scooping the perceptions and reactions of opinion leaders on the effect of rumours dissemination and utilisation in the state.

Rumour mongering is a phenomenon that can occur or be promoted due to ineffective regulation, dissemination and utilisation of information for social stability because it is a by-product of information need and access gap. Studies have shown that it is used to misinform and disinform the public especially for propaganda, political campaign and blackmail among others (Nook, Desmond, Sylvia, Jason, and Jamil, 2016). (Difonzo & Bordia, 2010 & Abdulmanafi,
2013). Rumours are pervasive like dusts flying or found everywhere without restriction. It is the oldest form of communication before the advent of formal writing. This takes place by word of mouth, being the social channel of communication for conveying thoughts and ideas. It is believed that rumours are capable of transmitting news but can also ruin reputations, set off crises and wars.

Rumours are unsubstantiated information that generate from opinions and expressions of individuals. Furthermore, declarations on Information Freedom (International Federation of Library Associations-IFLA, United Nation‟s Human Rights declaration article nineteen) indicated that “Everyone has the right to freedom of opinion and expression; this right includes freedom to hold opinions without interference and to seek, receive and impart information and ideas through any media and regardless of frontiers”(United Nation, 2015) as well, the African Union submission on information freedom and Nigeria‟s Freedom of Information Act also affirmed this right.

In spite of the declarations, Government must regulate the quality of information that disseminates to the public during conflict and crises situation and systematically to reach intended target and defuse tension. This is because the extent to which information is disseminated and utilised by the public inform actions and reactions positively or otherwise (Mohammed, 2014).
For these reasons, this study find out using survey design and questionnaire method among others causes of Rumour Mongering, sources of social instability information, the extent rumour mongering affected the social instability and challenges to combating rumours in the dissemination and utilization of information for social stability in Plateau State.

Ethno-religious crisis does more harm to the federalism than good. Ethno religious conflicts in Nigeria have presented many challenges that border on security and the corporate existence of the country. What we are witnessing through this crisis is a transfer of aggression from one grievance to innocent Nigerian. Therefore, creating hatred among Nigerians as well as demeaning the sense of belonging to one Nigeria. The ethno religious crisis, cattle rustling and discrimination in Jos have very often served as a tenterhook to national unity and integration.

In other words, the crisis has weakened patriotism, commitment to national deals and true nationhood, giving rise to parochialism, ethnicity and other cleavages which “ethno-religious‟ Jingoists exploit for their interest and advantage. More so, the Plateau crisis has had enormous negative consequences on the economy For instance, President Obasanjo in justifying the declaration of the state of Emergency in plateau State stated, among other things, that: “Violence has reached unprecedented levels and hundreds have been killed with much more wounded or displaced from their homes on account of their ethnic or religious identification. Schooling for children has been disrupted and interrupted; business lost billions of naira and property worth much more destroyed (Obasanjo, 2004).
President Obasanjo went further to observe that visitors and inventors have fled or are fleeing Plateau State and the neighbouring states have had their economies and social life disrupted and dislocated by the influx of internally displaced persons (Obasanjo, 2004). To further stress this point the president said that the Federal Government and the neighbouring states to Plateau State are incurring huge expenses in managing the socio-political and economic consequences of the near collapse of state authority and the breakdown of law and order in some parts of Plateau State and elsewhere (Obasanjo, 2004).

In a research report presented by participations of the senior executive course No. 26 of the National Institute, the economic consequences of „ethno religious‟ conflict were noted as follows: “In addition to the irreplaceable loss of lives, losses in terms of property (goods, houses, business premises) have not yet been fully ascertained. Some survivors have permanently lost all they laboured for in their lives.

Also, the various ethno-religious disturbances were a critical and potent force for socio-political instability, they portrayed the gross inadequacy and ineffectiveness of the state security, security of lives and property could not be guaranteed. The climate of insecurity usually created by violent conflict deters investments. It is a truism that an insecure, crisis –and – violence – ridden polity can never attract foreign investment. No investor knowing well that the polity is a security risk would venture his capital there. And where the polity is scaring away foreign investment, the economy becomes stagnant and democracy dividends equally become a mirage. As a result the growing incidence of ethno-religious crisis, cattle rustler and discrimination in Nigeria is sufficiently worrisome and if they are not stemmed now and completely the future may not hold much.

Social stability is pivotal to economic, political, religious, ethnic and cultural, development, advancement and sustainability of any society, community, country or nation. Social stability is fostered when there is willingness of people as a community to live together recognising their differences, respecting each other and charting progressive course. Humans are deeply social and interdependent species. Virtually, everyone is embedded within social systems from companies, community, organizations, and even universities to broader societies such as one‟s city or country (Kay & Friesen; 2011). Studies suggest that people seek to maintain views of their social systems and their attendant norms, rules, and social structures even when confronted with information suggesting the opposite. (Jost & Banaji, 2012). It has been observed that rumour mongering is one activity which disseminates negative information to the public about issues bordering on social stability. It has the capacity to infiltrate and destabilized the official dissemination and utilisation of information by ways of misinforming, disinforming and negative reshape of public orientation. There is doubt, the rumours surrounding violence associated with ethno-religious crises, cattle rustling and alleged covert discrimination and accusation against Hausa/Fulani communities in Plateau state have no doubt triggered peoples‟ reactions in the line of mistrust; enemity and disorientation in the state. Therefore, there is need for scholarly investigation of how rumours played influential role in infiltrating information dissemination and utilisation for the stability of Plateau state.

The following null hypotheses will be tested:

1.5 Objectives of the Study

This study will inform both federal and state government functionaries on sustainable solution to conflicts in plateau state by understanding rumour dissemination and its effects on social stability. Similarly, information dissemination agencies at federal and state ministries and parastatals as well as security organisations will benefit from this study as a blue print of information resources available for taking informed decision in tackling effect of rumour mongering in the maintenance of social stability and to be aware and brace up to one of the challenges of maintaining law and order.

Furthermore, this study can be exploited by librarians and information pundits to understand rumour generated about their services in the public domains and thereby create un-moderated social window to ascertain the subject of rumours circulated about their services and products by their customers. Similarly, studies about organisational rumour generation and transmission could be conducted in libraries in order to understand the peculiarity of organisational conflict and conflict management techniques in Library Management.

This study covered the effect of rumour on the dissemination and utilisation of information for social stability in plateau State in the flash points areas of Dutse Uku, Katako, Dogon Karfe, Rakung gasa, Rukuba and Dutse Kura in the Local Government Areas of Barkin Ladi, Riyom, Jos North and Bassa in 2001, 2008, 2011 and 2014. The choice of scope was informed by the notable devastations in the areas due to lingering crises.

1.8 Limitation of the Study

This study was limited by the number of respondents reached.

In this research the following concepts were defined operationally: