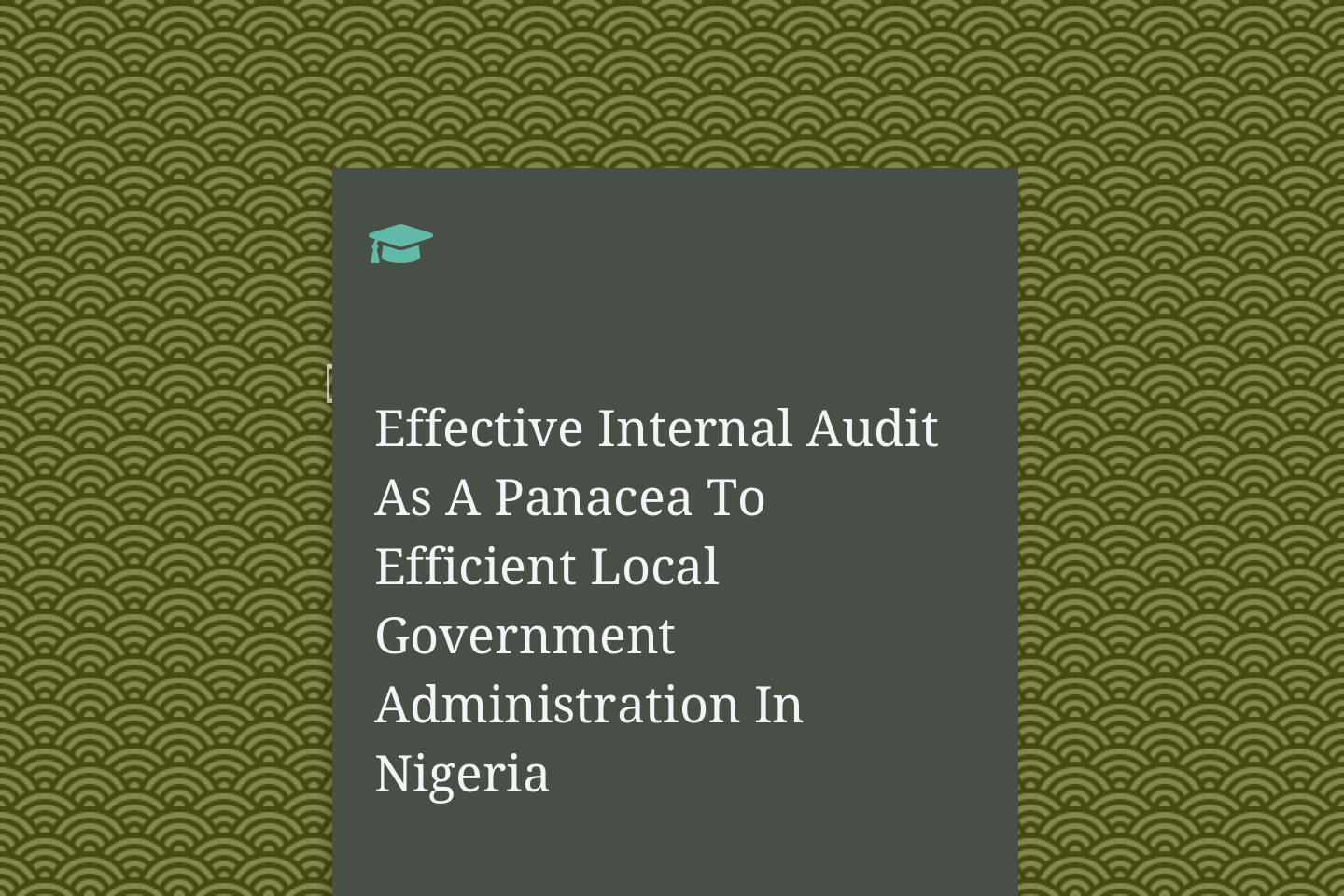 Globally the role of auditing is being appreciated for its avowed operations and activities. Ihe and Umeaka(2006:370) defined auditing “as a process carried out by suitably qualified auditors during which the accounting records and the financial statements of an organization are subjected to examination by an independent auditor with the main objective of expressing an opinion in accordance with the relevant terms of appointmentpurpose” they also noted that the objectives of auditing were grouped into two

The crux of this research work however is based on internal Audit – which is a very important aspect of auditing, how the internal audit unit of the government can be made effective in order to assist in the efficient administration of local Government Areas (LGA). Internal Audit as defined by Chukwu L. C. (2011: 28) is “an independent appraisal of activity within the organization for the service of accounting, financial and other business practice as a protective and constructive aim of management”. He further opined that, internal audit is a type of control which functions by measuring and evaluating the effectiveness of other types of control. Anosike. C. K (2009:29) noted that the primary objective of internal audit, is to promote utmost efficiency and security in conducting business, in our case, the business or operations of the Local government areas. Azubike (2005:83) enumerated the features of internal audit as follows:

Several definitions have been put forward by authors and scholars on local Government, Okolie (2003), that local government is defined as “a unit of government below the central regional or state government, established by law to exercise political authority, through a representative cancel within a defined areas”.

Local Government Administration in Nigeria, as defined by Okolie and Eze (2006:5) is “the administration of the grassroots at the local government areas by the Federal (National) or state government through the use of bureaucrats or an agency of either or both tiers of government”.

With effect from 1979, the constitution of the Federal Republic of Nigeria accorded local government a higher status, as a third tier of the government where it now enjoys relative autonomy from the state deriving also its powers from the constitution and not surviving by the whims and caprice of d state as provided in the guideline for local Government perform in Nigeria 1976. Following this development the status of the local government in Nigeria is that of a corporate entity, which can sue and be sued, also has perpetual secession.

The Guideline gave the principal aim of local government as I. Grassroots political development and consciousness.

Therefore, the requirement of financial resources to effectively and efficiently translate the administration of the above functions to service delivery which will impact on the local people is crucial. In view of this enormous resources at the disposal of the local government and obvious financial management ineptitude of the political in the areas of fraud, maladministration, misappropriation of pubic fund, etc, there is need an independent arbiter. To check these excesses, hence the need an internal audit.

Ihe and Umeaka (2006:375 and 392), enumerated the scope and objectives of internal audit function to local government in ensuring the efficient administration of the councils and its programsas

In carrying out its duties, the internal audit department shall be working closely with the treasury department and make use of the following financial statement provided by local government as enumerated by Ihe and Umeaka (2006:204)

In the context of the subject matter, the researcher has selected Isiala-mbano localgovernment areasand Mbaitolilocal government areas for this study.

Internal audit is beset by a number of problems which include

The purposes of the research are as follows.

There is no draying that most political representatives at the local government levels lack the managerial skills needed to efficiently administer the council, thereby, giving rise to inefficiently in administration of the municipality. Due to all these, it prompted the following question, this.

The hypothesis will necessarily be derived from the problem (question) stated earlier which the researcher intends to investigate. It shall be stated in Null and alternative forms which will be represented by „Ho‟ – Null hypothesis

„Hi‟ – Alternative hypothesis. These are stated as

Hi – Ineffective/inefficient administration will not affect the local government officials

Hi – Lack of understanding between the internal audit unit

The significance of this study is to state the fact and the importance of efficient local government administration in the society this study is significant to these specific groups.

According to Nnamocha (2005:38), scope of study defines„the boundary for the work in terms of time, institution and the extent of coverage promised in the study”.

The researcher promised in the limit the research findings to the area of financial procurement administrative departments, internal audit department and stores department of the local government areas.

The limitations involved in the course of this research includes hostility and non-cooperation on the part of some of the respondents, and also the constraints of time was a limiting factor in the course of writing

Audit alarm committee; The intention was to prevent irregular payments before they are made. Is membership comprised of the Auditor- General as chairman.Accountant –General of the federation and one representative of the president as members. The committee was charged with the responsibility to examine all cases of alarms raised and brought before it. All prepayment audit queries raised by the Internal Auditor but overruled by the Chief Exeitascutive must be referred to this committee

The Impact Of Accounting Information On Banks Portfolio Management

The Challenges Of Cost Benefit Analysis, In A Computerized Accounting System