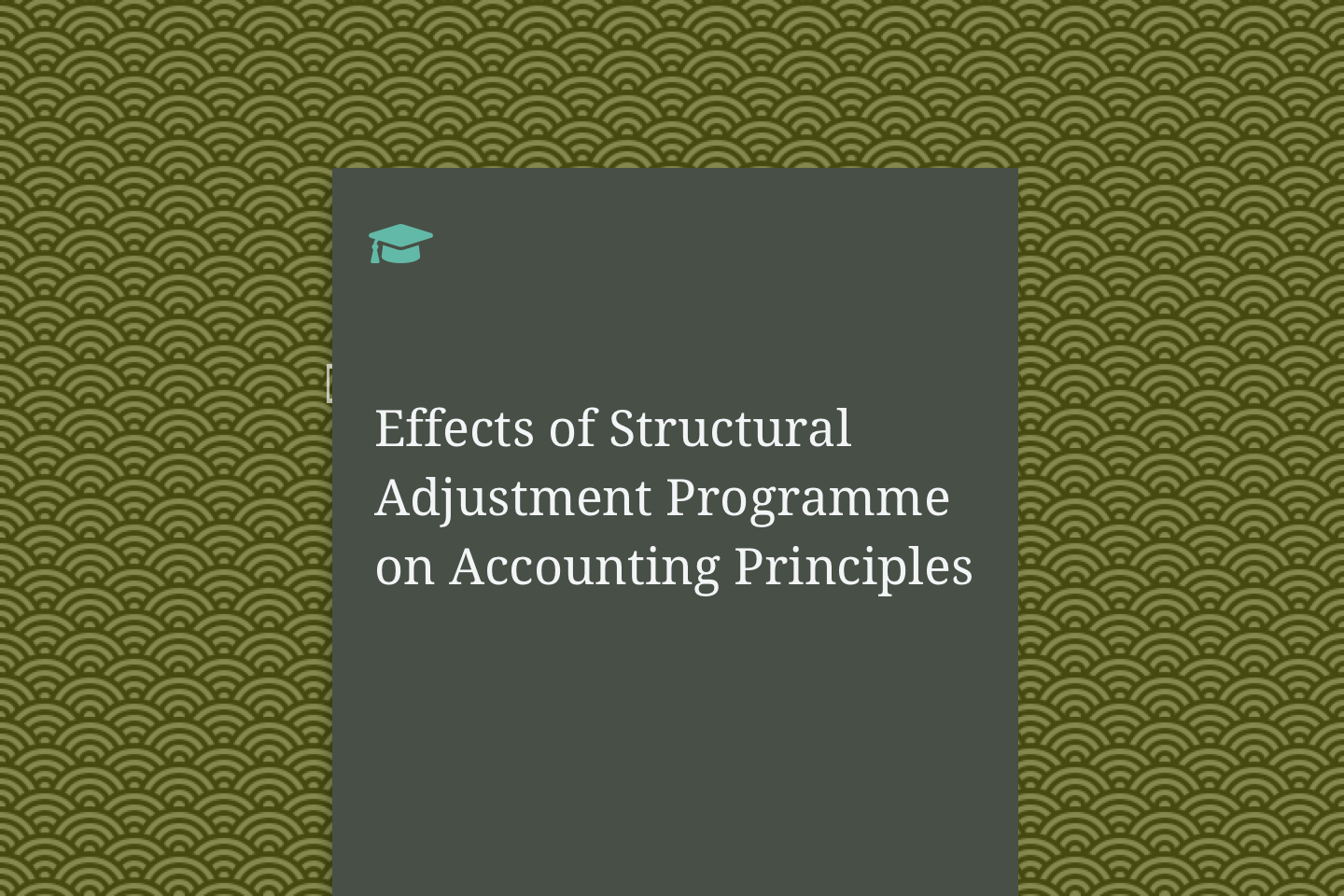 Before the “Structural Adjustment Programme (SAP)” can be clearly defined, one must have a better understanding of the situation into which it was introduced. At the conclusion of a Debate/Symposium on “Devaluation” held in 1982 at the Institute of International Affairs, the consensus emerged that the economic problem of Nigeria was structural.

At the summary of overall economic level which the economist call “The macro level”, the structure f the economy is its composition as seen through the shares or proportion of the various component parts or economic aggregated, in the total sum of goods and services produced in a period usually a year.

Therefore, the structure of the economy is shown by the shares of the various economic sectors in the Gross Domestic Product (GDP).

Just like any other theory, accountants have discovered that they need to make certain assumption before they can prepare financial statements. These assumptions, which underline the preparation of financial statements, are also known as principles, postulates, conventions, concepts, and standards etc. The originate from such concepts as entity, going-concern, periodicity realisation, matching, consistency and historical cost concept.

Accounting Principles are usually rules and conventions, which have been adopted as a general guide to action by the accountancy profession. These principles are formulated in such a way that the practical details of accounting may differ greatly from one company to another. To ensure acceptance, an accounting principle must be useful in coping with a practical recording problem, it must be reasonably objective, that is, provide a similar answer in the hands of qualified practitioners, and it must be feasible, that is, it should not be expensive to apply.

This research work tends to give an appraisal on the effect of the SAP on accounting principle. Exchange rate devaluation was considered a setback in the progress of the SAP. Therefore the under listed problem was discovered:

Over emphasis on the restoration of balance of payment

This study aims to find out the objectives which include;

This research attempts to find answers to some nudging questions about the Structural Adjustment Programme on Accounting Principles. This is with the view at highlighting some silent reasons responsible for the ineffective and failing performance of SAP.

Some of the questions to which we seek answers without any form of prevarication include:

1.5 HYPOTHESES OF THE STUDY

Hypothesis is a proposition specifying some form of relationship between variables, it is merely and evidence for supporting or rejecting one‟s preconceived ideas or view. Hypothesis are of two types (H1) which is the alternative hypothesis and it the proposition the researcher which to confirm from the data. It is always expressed in positive term. The other type (Ho) which is the null hypothesis and it is the logical converse of the alternate hypothesis. It is the negation of the alternate hypothesis; the following hypotheses are formulated as guided to this research studies. However, there are three hypotheses in this research work.

HO: There is no significant effect of the Structural Adjustment Programme in the commercial sector on accounting performance.

H1: There is a significant effect of the Structural Adjustment Programme in the commercial sector on accounting performance.

H1: There is an alignment between structurally Adjustment Programme and Second tier Foreign Exchange Market.

H1: The Structural Adjustment Programme increases the challenges and calls for professionalism in management.

Structural adjustment Programmes (SAPs) in this study are meant primarily for accountants and the economic policies for developing countries that have promoted by the World Bank and IMF since the early 1980s by the provision of loans conditional on the adoption of such policies. The research study is also significant to the government by removing “excess” government control and promoting market competition as part of the neo-liberal agenda followed by the Bank and, the Enhance Structural Adjustment facility which is an IMF financing mechanism that aid the support of the macroeconomic policies and SAPs in low-income countries through loans or low interest subsidies.

SAP policies reflect the neo-liberal ideology that drives globalisation. The aim to achieve long term accelerated economic growth in poorer countries by restructuring the economy and reducing government intervention. This is done by privatising state owned industries, including health sector and opening up their economies to foreign competition.

This study revolves around the effect of Structural Adjustment Programme on accounting principles, with the Central Bank of Nigeria Abuja, as the case study. It focuses on the need of the economy to adopt these certain adjustment programmes to restructure and make policies and schemes that will improve the economy. The appraisal of the Structural Adjustment scheme is principally hinged on the problems and challenges , facilities, legal framework, personnel, the scheme compliance and corruption.

1.8 LIMITATION OF THE STUDY

The limitation involved in the course of this research included hostility and non-co-operation on the part of some of the respondents. The level of ignorance on economic reformation and illiteracy was very high. Some SAPs officials refused answering the question they felt would indict them. Also the financial implication was very high and imposed certain restrictions.

The constraint of time was also a limiting factor as all the areas of interest were not covered as they would have been adequate.

The Effects Of Financial Accounting Reporting On Managerial Decision Making

The Impact of Accountancy Information on Decision Making Process