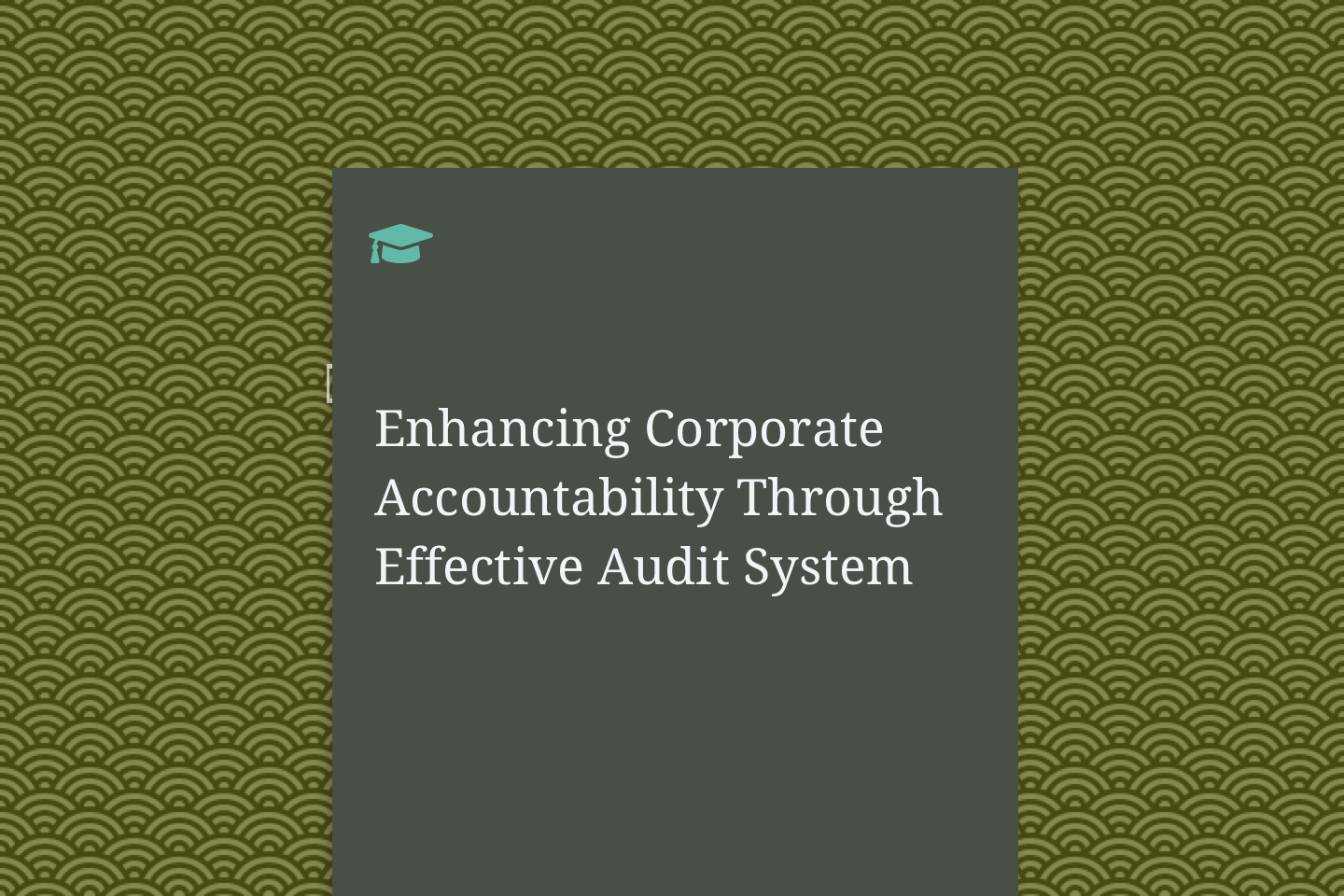 Ability to report back the conclusion of an assignment of the progress made so far to the person(s) who delegated the authority to the performer of an assignment, duty or function, has for decades eluded this nation both in the private and public responsibilities to be performed and performed and reported back has been carried out as accomplished. The lack of accountability leads to many vices in our social and economic system. The objectives of this study therefore are: (a) To ascertain the determine the role of independent audit towards accountability in an organization (b) To determine if independent audit can control fraud and embezzlement. The primary data sources (the questionnaire) collected response from thirty two (32) respondents out of forty (40) that was sampled. Data collected through primary sources were analyzed on tables using percentages, three hypotheses were stated in null form and ere tested using the X2 statistics, simple percentages and the test revealed that audit enhances accountability in an organization and also help in controlling fraud, embezzlement and defalcation in an organization.

Accountability in both public and private section has being an issue that is worth discussing due to its paramount and colossal impact to the overall performance of an organization.
It (Accountability) has to do with reporting back action, task carried out by an individual to the authority who apportioned such function.

Accountability is the process or act of reporting back to a higher authority, body or individual the actions taken by a steward. It enables the person or persons reported to determine if the steward has acted or performed the assigned duties properly and satisfactory. It plays a major role in the success or failure of any business, particularly when the business is not managed by its owner.
Initially most business set-ups were managed by their owners. The owners‟ manager was the sole financial contribution to the enterprise. But with the development in the scale and scope of business, a huge capital beyond that affordable by the sole individual or a family was needed. Consequently contributors (hereafter called shareholders) were required to raise the funds for the business. The emergence of these shareholders led to the divorce of the owner managers from the management of the business as all of them cannot be directors at the same time. This the management of business was entrusted to the hands of people who have no financial claims to the business and the shareholders were skeptical about this particularly as the law does not permit them individually to go through the books of the company in their desire to keep abreast of the performance of the directors.
This skepticism aroused the need for surveillance over the activities of the non-owner managing directors. This bid to fulfil the later led to the engagement of third-party (an Auditor) to perform an audit of the company‟s accounts.
Audit has since them received a lot of definitions and/or then received a lot of definitions and/or interpretations both from accounting bodies and auditors and their non-the-like. Justifiable is to say that audit has suffered a lot of misinterpretations. Most of the misgiving interpretations see it as being armed at fraud and error detection. But audit essentially involves much more than that. One of the most involved and of course the most acceptable definitions so far is that issued by the consultative council of accountability bodies (CCAB) which sees audit as “the independent examination and expression of opinion on the financial statement of an enterprise by an appointed auditor in pursuance of statutory obligation (Howard 1982:1).
Deductively, an audit is the objective scrutiny of someone‟s work or presentation by a third party (an auditor) who is different from the users and the preparing of the presentation. The general essence of audit is to ascertain compliance of the firm‟s records and operational policies with usefulness of acceptability of and the dependability on the firm‟s financial statements.
Accountability as explained above has suffered some misconceptions, surprisingly in the hands of those who should have understood it better. Most of the lay men conceptual understanding of accountability relates it to „communicating about monetary matters (Odon, 1999:7) but accountability goes beyond that. According to the Webster encyclopedia dictionary of English language (1995:110), accountability is defined as “the state of being accountable, answerable, liable or responsible” the same dictionary goes further to define accountable as “liable to pay or make good in case of loss; responsible to a trust, liable to be called to account, put in another way an much more related to the context in the articles Aba times of fourth September 1999 captioned “accountability in the third republic” it says
Accountability connotes answerability and stewardship, by answerability is meant answering for one‟s actions and decisions (odon1999:7)
Stewardship according to the article means service; it means that every leader should be responsible to the people who reposed trust in him.
For accountability to be accorded its rightful place in an organization the writer believes that there is a high need for proper internal control measure and in addition, efforts should be made to ensure that company accounts are subjected to external and independent audits after each financial period.
The bible also records in chapter 25 verse 14-30 of saint Matthew gospel, the story of a rich man who went on a far journey entrusting the affairs to his servants and who when he returned, required the servants to answer individually, for their stewardship to the business while he was away. It in the same manner that it is required of the chief executives and directors of a company who are quite different from the real owners of the business to answer for their stewardship of the funds and property entrusted to them by the shareholders. It is desire for accountability that gave rise to what we know today as audit- a mechanism through which the shareholders are made abreast of the true and fair picture of the activities of the directors and chief executive of the company

According to the memorandum of understanding signed by the stake holders of Sheffield Risk Management, the company has its ownership structure as shown below out of the start-up capital of twenty two million naira (₦22,000,000).

The increasing wave of fraud and embezzlement of public funds by high officers and chief executives in the private and public companies brought to the lime light some misconceptions of what the job of an auditor is and what audit is all about. To the uninformed, the auditor is a wizened individual who wears the traditional green eyeshade and sleeve garters.
They will expect to find him perched on top a high stool counting money, meticulously adding long columns of figures and gaining his sole pleasure in life from the apprehension of luckless person whose books failed to balance or whose cash account proved to be short (harword 2002:135).
According to Pratt (1998:1), were you to ask the average man in the street about the auditor‟s job, he will probably tell you that he prevent fraud, press our layman further, he may paint you a picture of a rather gray individual who buries himself in ledger, emerging only from time to time to produce sets or figure which are not important anyway
Such are the image that the auditor has attracted but they are incorrect in the sense that “the auditor‟s primary responsibility is neither to prevent fraud nor to produce figures” (woolf 1982:12)
The problems are:
And to the few informed ones the question constantly asked is “how independent is the independent auditor?”

Having had the problem stated, the objectives of this study which are stated in null form are:

In order to complete this study successfully the following hypotheses have been formulated in null form:
I. Independent audit does not enhance accountability in an organization.
II. Fraud and embezzlement will not decrease if independent auditors do their work properly
III. Mismanagement is not due to lack of accountability.

The misconception of the function of audit has, no doubt, eroded in most minds the confidence and reliance on creditors‟ report and has dented the credibility with which the audit profession was known.
The researcher has, therefore taken to this study for the need to show management and directors that reliance on auditor‟s report will help to enhance their performance. The studies will contribute to knowledge by bringing the opinion of many experts in one text and this make it easier for readers to have a broader knowledge of the subject without having to go through several texts.
Finally the thesis will become a reference material for other student who will carry out further studies in the field.

1.6 THE SCOPE OF THE RESEARCH

The study will mainly focus on the company selected as a case study i.e. Sheffield Risk Management Limited, Owerri. The researcher would go beyond desk search into field to sample the opinion of workers, officers as well as chief executive. These would be accomplished through the construction and issuance of questionnaire to the potential respondents and also through oral interviews.
The researcher intends to convince the misinformed minds about the relevance of independent auditing as a tool for enhancing accountability. To do this only well informed individuals will be consulted during the primary data collection stage.
The scope of the study will be limited to the statutory role of the auditor. The auditors power and rights, lead liability, ethics and types opinion. The study will also cover intend control as a very important variable in accountability. Further aspects and functions of internal audit will also be covered.

In the course of this research work, problems of various natures were encountered, which in no small measure constituted some “Road block” to the progress of the study. Among the militating factors are the following:

Some terms used in this study which may not be clearly understood by some readers are hereby defined.
Audit:
This is the dependant examination of a financial statement by an auditor expressing an opinion about the true and fair view of the financial statement and state of affairs of the enterprise.
It is the independent examination of, and expression of opinion on, the financial statement of an enterprise by an appointed auditor in pursuance of that appoint and in compliance with any relevant statutory obligation.
AUDITOR:
The individual or partnership firm appointed to carry out an audit of the financial statements of an entity.
AUDIT REPORT:
Any report, written by an auditor on a matter on which an opinion has been sought within the terms of an auditor‟s appointment.
AUDITOR‟S REPORT:
This is another term for audit report.
AUDIT EVIDENCE:
This is information obtained by an auditor inn arriving at the conclusion which forms the basis of the auditor‟s opinion on the financial statement being audited.
INTERNAL AUDIT:
This is the audit function carried out within an organization of evaluating and reporting on accounting and other controls on the operations of the organization.
An audit of an accounting entity carried out by an auditor who is not employed by that entity or by its manager and is as far as possible independent of the person(s) who manage(s) the entity.
ACCOUNTABILITY:
This is the state or condition being accountable.
ACCOUNTABLE:
This is the required provision for the description, analysis and evaluation of actions.
INTERNAL CONTROL SYSTEM:
This is the whole system of controls financially and otherwise established by the management in order to carry on the business of the enterprises in an orderly and efficient manner, ensure adherence to management policy, and safeguard the completeness and accuracy of the records, as regards to an organization.
REFERENCES