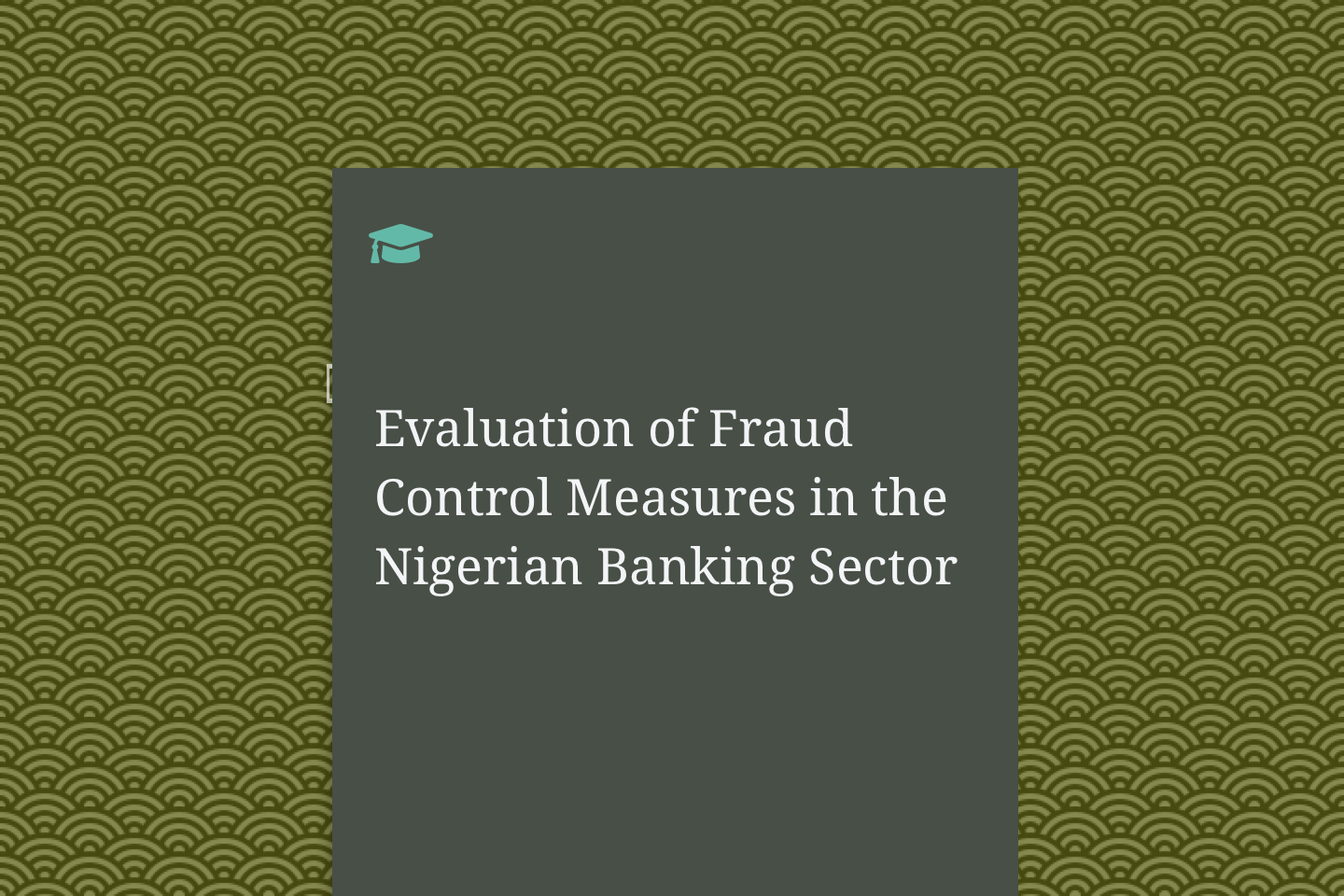 Evaluation of Fraud Control Measures in the Nigerian Banking Sector

Fraud is an intentional deception made for personal gain or to damage another individual. Fraud is a crime and a civil law violation. Defrauding people of money is presumably the most common type of fraud.

Customers of banks are currently experiencing increase in fraud schemes. Scams to get a customer personal information can occur through many different means such as e-mail and telephone

Bank fraud is the use of fraudulent means to obtain money, assets, or other property owned or held by a financial institution. In many instances, bank fraud is a criminal offence, while the specific element of a particular banking fraud law varies between jurisdictions; the term bank fraud applies to actions that employ a scheme as opposed to bank robbery or theft.

Controlling bank fraud in the financial sector is a major task for all the stake holders in the sector. Every year, banks lose billions of naira to fraud which comes in all size and shapes both from external perpetrators and internal employees.

In its broadest terms, fraud means obtaining of something of value through deception. If fraud were described as an industry it would clearly be one of the fastest growing areas of the economy. One hundred criminals who serve several periods of imprisonment for armed robbery offence were recently reported that he wished he had understood earlier in his criminal career how easy it was to commit fraud. He now considers that fraud involves less traumas, the reward, are far greater and the penalties substantially fewer than in other form of crime. This study will address those forms of fraud that target the financial service sector and how the industry has responded with some measure successful in controlling this ever increasing problems and other measure that can be geared towards achieving further results.

As earlier mentioned, the Nigerian banking industry, the back bone of Nigeria economy is one of the most profitable of higher performance and could achieved better result in output and obligation to the society. To realize this, the banking industry will have to perform lending role that can reinstate the economy.

The low level of the performance of the Nigerian banking industry is due to an array of problems, one of which is the issue of fraud which is one of the most intractable and monumental problem facing the industry.

The problem of accountability is traceable to the root cause of fraud which results from poor record keeping misappropriation forging, poor internal control, excess power given to the executive or management etc.

The primary objective of the research is to evaluate the fraud control measures in the Nigerian Banks practical means of reducing the incidence of fraud in our bank to achieve these objectives, the following secondary objective have been specified.

By so doing, customer is better informed on the nature, type modes and various operations of the various frauds and so placed in a better position to prevent and detect any fraud led activity.

HO: There is no significant effect of fraud in the banking industry and the economy in general.

HI: There is no significant relation between greed by bank staff and fraud perpetrated in banks.

HO: There is no significant relationship between the effectiveness of fraud control measures instituted by banks and the level of fraud committed in the banks.

HI: There is no significant relationship between fraud committed in the banks and distress experienced in Nigerian banks.

HO: There is no significant cause of fraud perpetrated in banks.

HI: There is a significant causes of fraud perpetrated in banks.

The significance of the research study is hinged on the fact that the fate of the Nigerian economy is inevitably tied to the structure, direction and survival of the banking and financial system, it follows therefore that any serious destruction in the system will not only affect the system alone but the Nigerian economy and the public in general and the consequences which could leave the economy in jeopardy. Therefore, the remediation will help take the problem of fraud thereby reducing bank failures and stabilize the industry.

The research study will go a long way to show the effect of fraud in banks, its implication on the industry and possible remedies. It also shows the impact of those remedy on the economy and society in general. Banks and other financial institutions are expected to gain double from this study. First the study will highlight operations, lapses and others that give room for fraudulent activities in the banks and secondly will also stimulate self assessments by banks the research work will also go a long way in increasing the knowledge of students of banking financial management accounting, administration and other related discipline.

The scope of this study research will however be limited to only banking using central bank of Nigeria (CBN) as a case study.

The study is primarily concerned with the investigation and evaluation of fraud control measure in the Nigerian banking sector with regard to central bank of Nigeria (CBN).

Fraud is an act of or course of deception deliberately practiced to gain unlawful or unfair advantage deception directed to the detriment of another.

This involves all financial institutions such as banks, insurance company etc.

Bank: Is an establishment saddled with keeping money and valuable safely, the money being paid out of the customer order?

1.9 LIMITATION OF THE STUDY

The following are the constrains faced by the research in the course of carrying out the work.

A Critical Analysis Of Value For Money Audit In Public Sector