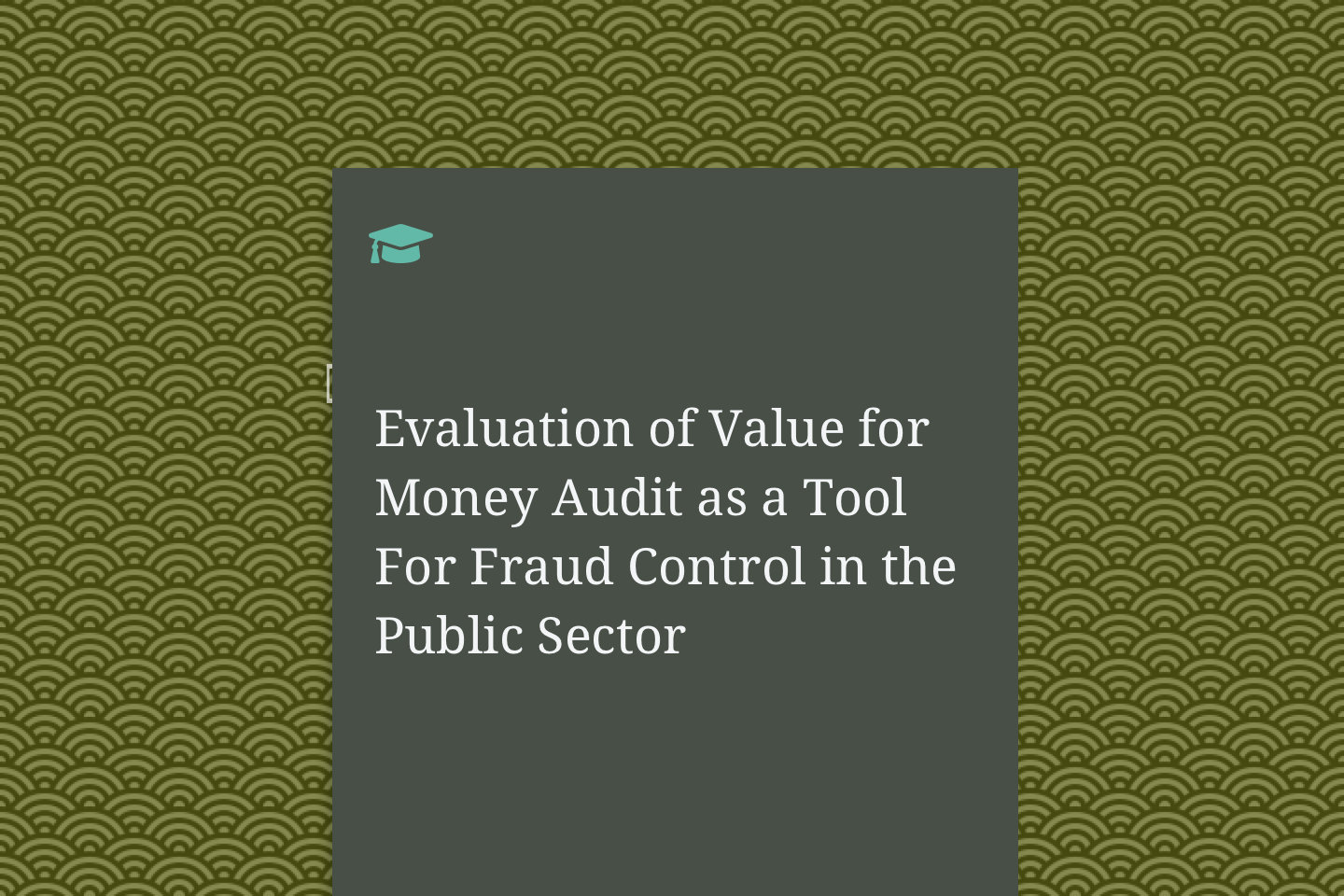 The scope of governmental auditing has been widened over the year by the demand for independent verification of information to the extent that it can no longer be limited to the audit of financial operations, but value for money audit which ensures that the activities and programs are carried out at low cost and high standard. Lack of commitment in cost efficiency to the overall achievement of goals by the managers in the public sector brought the need of this research work titled “Evaluation of value for money audit as tool for fraud control in the public sector”. The aim was to ascertain whether government auditing achieves the purposes for which programs are authorizes and funds released economically and efficiently in accordance with applicable law and regulations. A survey research design was adopted for the study with sample size of 100 respondents randomly sample and stratified from Audit and finance department of PHCN (Abuja). Three hypotheses were tested at 5% level of significance using the analysis of variance (ANOVA) statistics. it was found that value for money audit play a vital role in promoting the effectiveness and efficiency of activities in the public sector the researcher recommend that government should support the implementation of policies formulated to enhance value for money audit in the public sector.

The size and scope of these sectors have sometimes made it clear for the executor to exercise personal and first hand supervision of operation. It is in this light that value for money audit established by management is initiated, for any organization to carry out its business efficiently and effectively, there must be some factors that must be put in place for the smooth running of the organization like materials, machines, human labor and money e. t. c.

Auditing is seen to play an intermediary function in between management and the resources of the organization. It is also fundamental to any business either the public or private sector, which will help the business to keep its adequate financial records. These financial records are kept in response to the demand by a system control which requires that the business enterprise must be carried out in an orderly manner, ensure adherence to management policies, safe guard the assets and secure possibly the completeness and accuracy of the records. Irrespective of these facts of system of control established by the management of the organization, fraud still thrives.

In the early 1970s, the role of the state auditors began to change dramatically. Changes began in USA, Canada, and in several European countries. The representative of the people started demanding information on the efficiency and effectiveness of public expenditure.

In Nigeria no specific legislation has been put in place to empower auditors to carryout value for money audit. However, the 1999 constitution section 88 (2) empowered both the two federal house and the state house of assembly to conduct investigation to expose corruption, inefficiency or waste on the execution or administration of law within the legislative competence and in the disbursement or administration of fraud appropriated by it.

Therefore, fraud control has become increasingly important to managers of various governments in an organization. In general, financial statements fraud has always weakened investors’ confidence in both private and public sector investment. This is because 1 fraud against an organization reduces the net income by 1 and services to be provided to people in the case of public sector. However, value for money audit will be wildly concerned with the economy and efficiency of an organization and the effectiveness of achieving its desired objective thereby controlling fraud to evaluate the effectiveness of the internal control system within the organization.

The history of electricity in Nigeria can be dated back to the end of the 19th century when the first generating plant was installed in Lagos in 1898. From then until the 1950, the platform of electricity development was in the form of individual electricity power undertaking scattered all over the towns, some of the few undertaking were federal government bodies under the public works department, some by the native authorities and others by the municipal authorities.

Fraud is a complex phenomenon. It is rampant in both private and public sectors of Nigerian economy. In the public sector, value for money audit reports are mostly unqualified even in a glaring situation or cases of corrupt practice by the managers that means that auditors especially those in public establishment compromise their duties or their duties are influenced and threatened in the performance of their statutory functions.

Therefore these studies tend to find out why there are:

This study tends to find out some of the objectives which will include:

The hypotheses are stated in null and alternative forms.

Ho1: There is no significant effect of value for money audit in fraud detection in the public sector.

HA1: There is a significant effect of value for money audit in fraud detection in the public sector.

Ho2: There is no alignment between internal control and fraud detection.

HA2: There is an alignment between internal control and fraud detection.

Ho3: The value for money audit does not institute financial discipline in organization.

HA3: The value for money audit institute financial discipline in an organization.

Basically, the scope of this research work is on the value for money audit in the controlling of fraud, detection and financial crime prevention in our present day public sector using “power holding company of Nigeria” as a study. It focuses on the need for auditing and the importance of auditing in detecting and preventing fraud in other for organizations to ascertain their problems.

The population of study in selected staff in four of the units or department of the power sector namely the audit unit, finance, account and public relation department.

Virtually every research work comprises of one limitation or the other. However during the course of carrying out this research work, a lot of set locks were encountered which include:

1.8 SIGNIFICANCE OF THE STUDY

There is need to inform the management in the business organization on the value for money audit as regard to fraud control , detection and prevention in order that the auditor would be giving a maximum co-operation in the performance of his study.

Auditing: An independent examination of an expression of opinion on the fundamental statement of an entity by an appointed auditor (Ihe and Umeaka 2006)

Economy: An organized scientific study of the problem by which scarce resources which have alternative uses are allocated among competing wants with the objective of maximizing welfare (Nnamocha 2002)

Efficiency: Is the maximization of the ratio of output to input or the relationship between resources consumed in the process of generating effective output and output so produced (Norbert 1999)

Effectiveness: Refers to the degree to which the resulting output satisfied predetermined organization objectives (Norbert 1999)

Internal control system: The whole system of control financial and otherwise established by management in other to carry out the business of an enterprise in an orderly and efficient manner (Chukwu 2005: 17)

Management: An applied discipline concerned with the achievement of organizational objectives (Norbert 1999)

Public sector: The portion of an economy in which the activities are under the control and direction of the state (Ihe and Umeaka 2006:1)

Private sector: that portion of the economy in which the activities are under the control and direction of a non- governmental economic unit (Ihe and Umeaka 2006:2)

Fraud: Refers to intentional act by one or more individual among management, those charged with governance, employees, or third parties involving the use of deception to obtain an unjust or illegal advantage (Anesike 2009)

The Use Of Computer In Recording Accounting Information, Problems And Prospects

The Impact of Credit Management on the Profitability of Manufacturing Firm

The Effects Of Financial Accounting Reporting On Managerial Decision Making