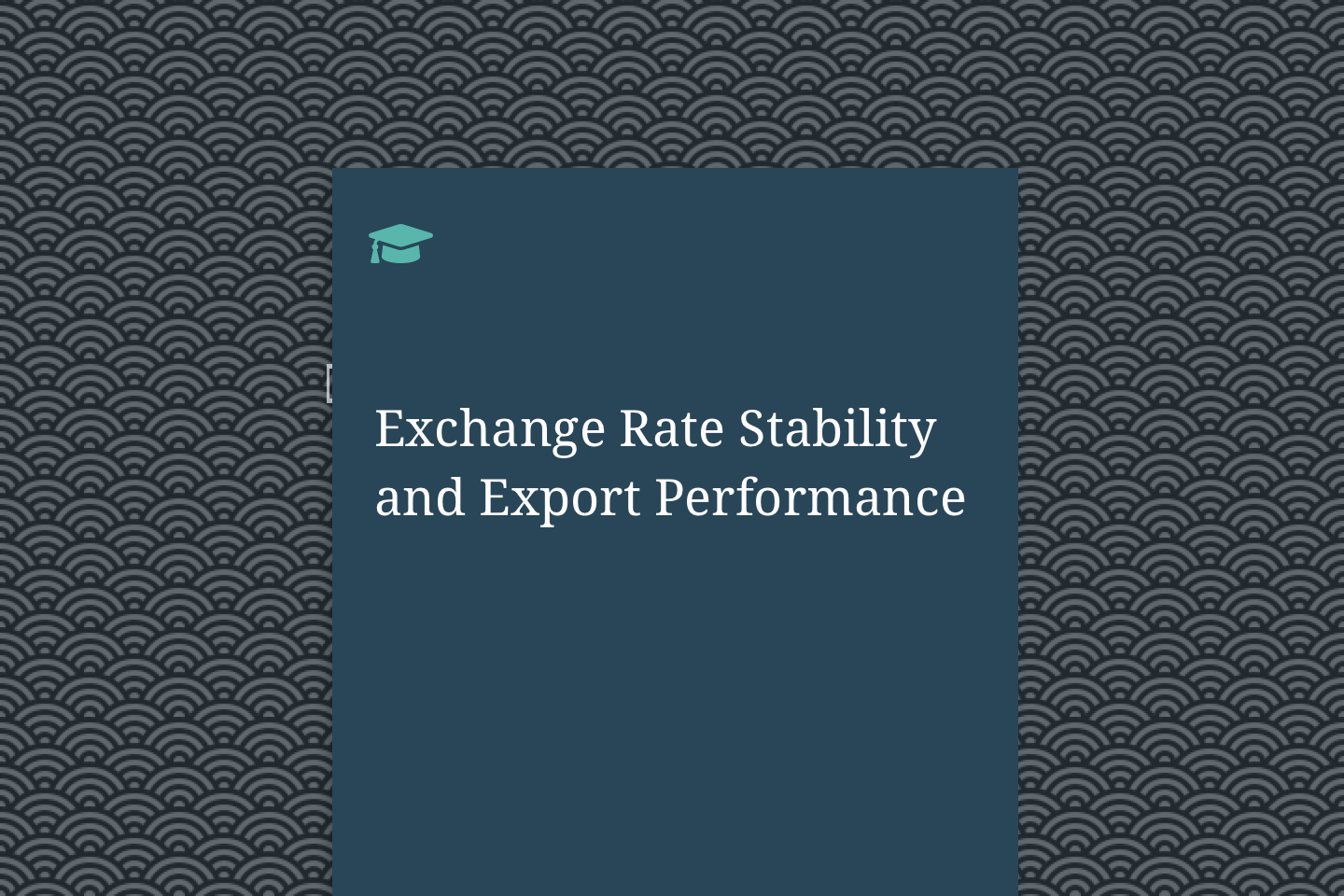 Exchange rate is the price of one currency in terms of another currency. Exchange rate stability has to do with government actions in order to stabilize exchange rate so as to increase export in Nigeria especially export of primary products (agricultural produce) over the years, Nigeria has adopted various exchange rate regimes ranging from fixed exchange regime to floating exchange regime. The main purpose of this work is to determine to what extend does the volatility and risks of exchange rate affect exports of agricultural produce in Nigeria. To do this, the classical Linear Regression Model is applied and the ordinary least square econometric technique is also used to estimate the impact of exchange rate on agricultural export trade earning. The variables used are export trade earnings as the dependent variable and exchange rate, interest rate, inflation and agricultural out put as the independent variables. Economic test shows the piori criteria of the parameters used to determine if it conforms to the economic theory. The statistical criteria employed are the F – test, the T – test and R2 which tests the significance of the parameters. The econometric criteria (second order test) used are the Durbin Watson test, which tests for the auto correlation and the randomness of the residuals. The Jarqu-Bera criteria is used to test for normality of the residuals. From the analysis of the result, it shows that there is a relationship export performance of agricultural product and real exchange rate stability in Nigeria. Exchange rate stability has a positive and significant effect on agricultural export. An increase in exchange rate stability raises the marginal utility of export revenue and therefore induces them to increase exports.

For clarity, it is pertinent that we start by defining the subject of this work. Exchange rate is the price of one currency in terms of another currency. It is the price of one foreign currency in terms of the domestic currency. It sends signals that affect consumption and investment decisions and therefore influences both the composition and value of aggregate demand and supply (CBN: Contemporary Economic Policy issues, 2003).
Exchange rate stability is therefore commitment of the government to allow the macro-economic policies to control the balance of payment. The government may fix the exchange rate policies either by legislation or by intervention in the Nigerian currency market.
According to Johnson (1984), the case for exchange rate stability is part of a more general argument for National Economic Policies conducive to international economic integration.
From a broader perspective, for exchange rate to be stable is to encourage international trade by making price of goods involved in trade more predicable and to promote economic integration. At the individual level, such decisions are usually taken in order to improve future consumption prospects, investment and because exchange rate involves an increase in wealth of a nation which is desirable, it then influences the society. The Agricultural sector in the Nigeria context embraces all the sub-sector of primary industry, they include; farming (which include livestock, application of modern implements such as tractors and chemical), Anyanwu, (1997). Before independence, the reliance of this economy on agricultural income led to the establishment of marketing boards with monopolist powers to buy these crops from farmers and sell them overseas. The role of marketing board was very important especially in stabilizing farm incomes and generating funds for executions of development projects in the country.
The exchange rate stability has a lot of contributions to the volume of export and the level of the domestic production. Although given that agricultural output is influenced by prices among other factors, the depreciation of the naira and the abolition of the commodity boards were expected to result in an overall increase in production of exports. According to Kwanashie et al (1994), the degree of fluctuation in prices is a major determinant of the changes in earnings given the trend in output over the years. But the exchange rate when applied in conjunction with other macro-economic policies was expended to lead to the achievement of the goals of price stability, improved and sustained economic growth, reduced unemployment, balance of payment stability and increased agricultural exports. A stable exchange rate system would help in meeting these goals, but in case when it is unstable, these achievements become difficult and often impossible.
According to economic indicators, the monetary Approach of Exchange rate determination confirmed exchange rate as a function of relative shifts in money, inflation rate or its proxy and domestic output between an economy and the trading partner. More so, the exchange rate of any counting is determined by the number of factors which include the state of the economy, the competitiveness and the volume of export, the level of domestic production of foreign reserve which is the nation worth, because of its role as the determinant of the relative price of tradable to non-tradable, it is a major instrument affecting the structural change in an economy.
Exchange rate policies in Nigeria as in other countries are often sensitive and controversial mainly because the kind of structural transformation required such as reducing imports or expanding agricultural exports, invariably imply a depreciation of the nominal exchange rate.
In the quest for stability of exchange rate, the Nigeria Monetary authorities tried several bidding system, including the Dutch
Auction system (DAS) and the Marginal Rate System. An attempt to ensure viability in the market led to many amendments of the rules, intervention by Central Bank of Nigeria (CBN), and opening of different exchange windows for operation during this period. Despite all these fluctuations, rate of exchange continued to be an issue of concern to the authorities. This is as a result of causes of changes in the exchange rate which are as follows;
This formed the basis of this study “Exchange Rate Stability and Export performance. The case of Agricultural produce in Nigeria, (1978-2010)”.

In the most developing country in general and Nigeria in particular, some of the economic tools used for both planning and implementation of the economic programme are normally based on educated guesses or on models which have been designed for other countries. The direction of this work will be to understand the cardinal reasons for the inability of Nigeria to maintain a favourable external reserve.
What factors capture most the exchange rate instability on export performance in Nigeria? This will show succinctly the conformity of exchange rate in Nigeria to a priori economic expectations.
Economic theory informs that decision to exchange rates depend demand and supply of foreign exchange, that is change in income earnings of export crop producers which come as a result of either increase or decrease in International World price of exports or devaluation of currency and subsequent prices. Such exchange rate change may lead to a major decision in the future output if they are unpredictable and erratic.
How true these economic assertions in Nigeria exchange rate profile are becomes the question.

The overall objective of this study is to determine empirically the dynamic effect of exchange rate stability and export performance of agricultural produce in Nigeria from (1978-2010).
The trust of the research will be to

To test for the statistically significance or non-significance of data, Ho represents the Null Hypothesis
H1 represents the Alternative Hypothesis
Ho = H1 there is no relationship between exchange rate stability and export performance of agriculture produce in Nigeria.
Results; If Ho > H1 then we accept the alternative hypothesis and reject the null hypothesis that exchange rate stability does not affect the export performance of agriculture produce in Nigeria.

One of the most dramatic events in Nigeria over the past decade was the devaluation of the Nigerian naira with the adoption of a structural Adjustment programme (SAP) in 1986. significantly, this depreciation resulted in changes in the structure and volume in Nigeria‟s agricultural export as empirically determined by many research (Oyejide, 1986; Ihimodu 1995; Osuntogun et al 1993; World Bank, 1994). The depreciation also increased the prices of agricultural exports and studies have shown a marked increased in volume of agricultural exports over the years. Appreciation of a country‟s real exchange rate caused by the sharp rise in export of a booming resources sector like oil draws capital and labour away from a country‟s manufacturing and agricultural sectors, which can lead to a decline in export of agricultural goods and inflate the price of non-tradable goods (Corden 1982) and Corden and Nearly (1984) however, the volatility, frequency and instability of the exchange rate movements since the beginning of the floating exchange rate raise a concern about the impact of such movements on agricultural trade flows.

1.6 LIMITATIONS OF THE STUDY

The concept of exchange rate stability has been generally acknowledged to have a strong relationship with economic development in Nigeria.