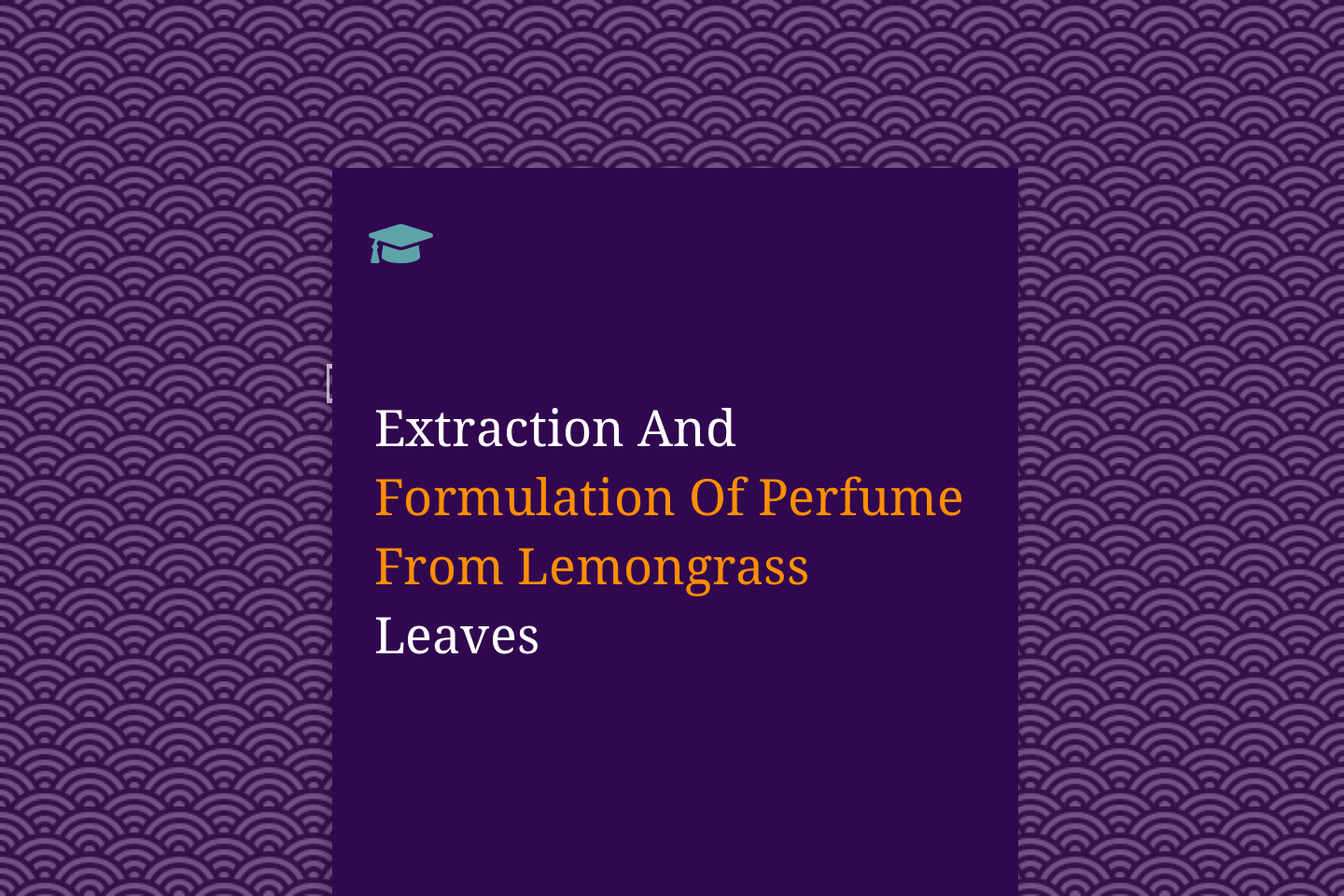 Perfume is a fragrant liquid made from an extract that has been distilled in alcohol and water. Since the beginning of recorded history, humans have attempted to mask orenhance their own odor by using perfume, which emulates nature’s pleasant smells. Many natural and man-made materials have been used to make perfume toapply to the skin and clothing, to put in cleaners and cosmetics, or to scent the air.Because of differences in body chemistry, temperature, and body odors, noperfume will smell exactly the same on any two people.Perfume comes from the Latin “per” meaning “through” and “fume,” or “smoke.”Many ancient perfumes were made by extracting natural oils from plants through pressing and steaming. The oil was then burned to scent the air. Today, most perfume is used to scent bar soaps. Some products are even perfumed with industrial odorants to mask unpleasant smells or to appear “unscented.” While fragrant liquids used for the body are often considered perfume, true perfumes are defined as extracts or essences and contain a percentage of oil distilled in alcohol.

A perfume is composed of three notes. The base note is what a fragrance will smell like after it has dried. The smell that develops after the perfume has mixed with unique body chemistry is referred to as the middle note. And the top note is  the first smell experienced in an aroma. Each perfumery has a preferred perfume manufacturing process, but there are some basic steps. The notes unfold over time, with the immediate impression of the top note leading to the deeper middle notes, and the base notes gradually appearing as the final stage. These notes are created carefully with knowledge of the evaporation process of the perfume. The top note consists of small light molecules that evaporate quickly. The middle note forms the heart of main body of a perfume and act to mask the often unpleasant initial impression of base notes.

Traditionally perfumes were made from plant and animal substances and prepared in the form of waters, oils, unguents, powders, and incense. This last method of fragrance gives us our word ‘perfume’ which means ‘to smoke through’. Most modern perfumes are alcohol-based and contain synthetic scents. While the term ‘perfume’ usually refers to fragrances in general, in the more technical language of the perfumer, a perfume must contain over 15% of fragrance oils in alcohol. The preferred fragrances for perfumes are by no means universal, but differ according to cultural dictates and fashions. In the sixteenth century, for example, pungent animal scents such as musk and civet were very popular. In the nineteenth century, by contrast, such animal scents were generally considered too crude, and light floral fragrances were favored.

Perfumes were held in high esteem and widely employed in the ancient world. The wealthy would perfume not only the body, but their furnishings and their favorite horses and dogs. On ancient altars perfumes were offered to the gods, while in the  kitchens of antiquity the same scents — Saffron, Cinnamon, Rose, Myrrh — might be used to flavor food and wine. Techniques involved in perfume extraction from plants include; solvent extraction, distillation and effleurage method. These methods to a certain extent, distort the odor of the aromatic compounds that are obtained from the raw materials.
Important thing in relation to perfume making is that there are three key ingredients you will need to produce perfume:

Family: Poaceae (Gramineae), Cymbopogon species  The genus has about 55 species, most of which are native to South Asia, Southeast Asia and Australia. Two major types have considerable relevance for commercialuse: East Indian lemongrass (Cymbopogon flexuosus ) is native to India, Sri Lanka, Burma and Thailand, whereas West Indian lemongrass (Cymbopogon citratus) is assumed to originate in Malaysia. The plants grow in dense clumps up to 2 meters in diameter and have leaves up to 1 meter long. Further Cymbopogon martini (Roxb.) J.F. Watson var. martini, which is native to India and cultivated in Java is  worth mentioning as it also grows in Bhutan and is extracted for palmarosa oil. Another species with commercial relevance is citronella grass (Cymbopogon winterianus Jowitt) which also stems from India, but is today grown throughout the tropics.

The reported life zone for lemongrass is 18 to 29 degrees centigrade with an annual precipitation of 0.7 to 4.1 meters with a soil pH of 5.0 to 5.8 (East Indian) or 4.3 to 8.4 (West Indian). The plants need a warm, humid climate in full sun. They grow well in sandy soils with adequate drainage. Since the plants rarely flower or set seed, propagation is by root or plant division. The plants are harvested mechanically or by hand about four times each year with the productive populations lasting between four and eight years Extensive breeding programs have developed many varieties of lemongrass.

The quality of lemongrass oil is generally determined by the content of citral, the aldehyde responsible for the lemon odor. Some other constituents of the essential  oils are -terpineol, myrcene, citronellol, methyl heptenone, dipentene, geraniol,limonene, nerol, and farnesol .West Indian oil differs from East Indian oil in that it is less soluble in 70 percent alcohol and has a slightly lower citral content. Lemongrass is used in herbal teas and other nonalcoholic beverages in baked goods, and in confections. Oil from lemongrass is widely used as a fragrance in perfumes and cosmetics, such as soaps and creams. Citral, extracted from the oil, is  used in flavoring soft drinks in scenting soaps and detergents, as a fragrance inperfumes and cosmetics, and as a mask for disagreeable odors in several industrial products. Citral is also used in the synthesis of ionones used in perfumes and cosmetics. As a medicinal plant, lemongrass has been considered a carminative and insect repellent. West Indian lemongrass is reported to have antimicrobial activity .Oil of  West Indian lemongrass acts as a central nervous system depressant .Oil of East Indian lemongrass has antifungal activity .The volatile oils may also have some pesticide and mutagenic activities .Cymbopogon nardus is a source of citronella oil. Cymbopogon martinii is reportedly toxic to fungi.

The problem of perfume extraction process is the distortion of the odor of the aromatic compounds obtained from the raw materials. This is due to heat, harsh solvents and also through the exposure to oxygen which will denature the aromatic compounds. These will either change their odor, character or render them odorless. The problem of formulation of perfume involves knowing the proportion in which essential oil, and other materials to be mixed to avoid skin irritation and increase the intensity and longevity of the perfume.Most imported perfumes are synthetic odorant which are not pure chemical substance but are mixture of organic compounds that are harmful when applied. There are limited perfume plants, from which perfume can be made; this can lead to importation of perfume thereby causing the decline of foreign reserves and unemployment.

The main objective of this project is to extract and formulate perfume from Lemon grass (CYMBOPOGON FLEXUOSUS).

This project focuses on the production of perfumes from natural/plant sources as against synthetic chemicals thereby will reduce any side effe ct resulting from synthetic chemicals.The success of this work will stimulate the development of the perfume industry locally because of available, cheap raw materials. More jobs will be created by those that will be engaged in planting/cultivating of the plant as well as establishing small scale extraction plants.
There will be reduction on the resources spent on importation of lemon grass fragrance by end users.

This project work is on how perfumes are extracted and formulated from
lemongrass. It further entails;
The synthetic and aromatic sources of perfumes.