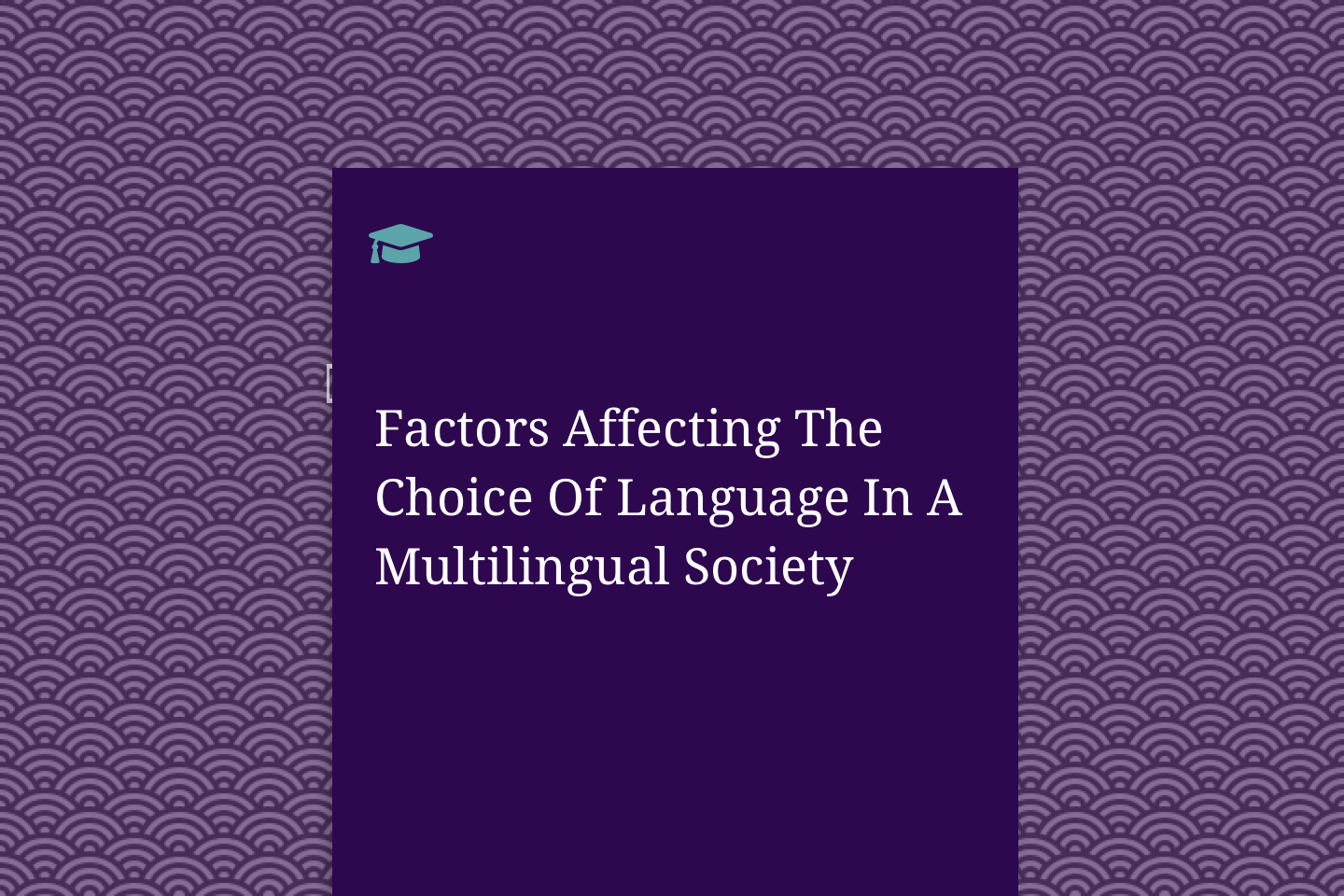 Factors Affecting The Choice Of Language In A Multilingual Society

This research work empirically explored the factors affecting the choice of language in a multilingual society. The purpose of which is to investigate the importance of language. The objectives of this study were explore the domain use of Yoruba and English in a multilingual Nigerian community, investigate the factors behind their linguistics choice and investigate the attitudes of Yoruba community towards Yoruba language, English language and other languages. The scope of the study is western Nigeria, the Krashen’s Monitor Model theory was used as a framework. The research design used for this study is survey, the population targeted for this study consists of all residence of western Nigeria in Nigeria, sample size consisting of 300 questionnaires administered to respndents and cluster sampling technique was applied. Instrument used for this study is the questionnaire. Data collected were collected from primary sources. From the analysis of the data, the findings shows that Family and friends affect the usage of language, Factors such as social interaction, work affect the choice of language, Love for a language affect the attitude towards it Following the findings, it was recommended that Languages be used where necessary, Every community should strengthen the usage of their language.

Language is the most important aspect of human being, it is a means of communication between and among people. It is used when expressing feelings. Samsuri (1983) pointed out that language is a tool used to express peoples thought, feelings, willingness and behaviour; a tool used t influence and be influenced.

Nigeria as a country and indeed Africa as a whole is home to largely multilingual population and many multilingual communities. There are n fixed boundaries between language groups, people live and move freely between language groups. People switch freely between two or more languages in their everyday interactions. Myers-Scotton (1993) noted that “speaking more than one language in one conversation in one day is the rule rather than the exception in Africa”.

Although English language is the general and official language of Nigeria, other native languages are still used by societies to interact with each other. Nigeria has over 720 languages. Members of the community feels some kind of love and comfort when they communicate in their regional language. Thus, members of the community switch their language (official and regional) especially in multilingual community.

Multilingualism is extensive and covers many different contexts and theories of language use, recently the emotional aspect has received more attention. Dewale (2004) noted that mixed instruction, early onset of learning the language, frequent use of that language all play a role in language choice. Migration largely contributes to language contacts and change.

The choice of a language in a multilingual context is a complex task and it depends upon different variables such as language user’s social background, profession, educational background, attitudes and different social domains. It is a sociolinguistic phenomenon, which refers to selecting languages for different purposes in different contexts.

This research is sociolinguistics analysis (language and society) that will describe language choice in society.

Nigeria is a multilingual country with varieties of communities having different languages. The community of the Yoruba in West Nigeria like any other ethnic community has issues concerning language choice, language use, language attitude and their right. This study attempts to explore the Yoruba language and its use in an Anglophone, multilingual community. It also aim to investigate the Yoruba’s attitude towards Yoruba and other existing languages in their communities.

It is against this background that the researcher considered the study of factors affecting the choice of language in a multilingual society.

The aim of this study was to investigate the factors affecting the choice of language in a multilingual society. The specific objectives are to:

The critical nature of language in any community cannot be over-emphasized, this is because language is a means of communication and expression of feelings. Empirically, this study is carried out to the factors affecting the choice of language in a multilingual society so as to ameliorate the problems associated with the language system of Nigeria. When the native language is not maintained, important links to family and other community members may be lost. This study will be important to the society it will teach it the importance of linguistics and multilingualism.

It is hoped that the exploration of the society will provide a broad view of the operations of the language system to the society and the country at large. This study will be of benefit to;

Government: this study will reveal to the government happenings in the communities. Formulation and implementation of policies based on this findings would ensure development and peace.

This study at the end will enlighten communities on the implication of multilingualism.

This study is intended to investigate the factors affecting the choice of language in a multilingual society, using the Yoruba community of western Nigeria.