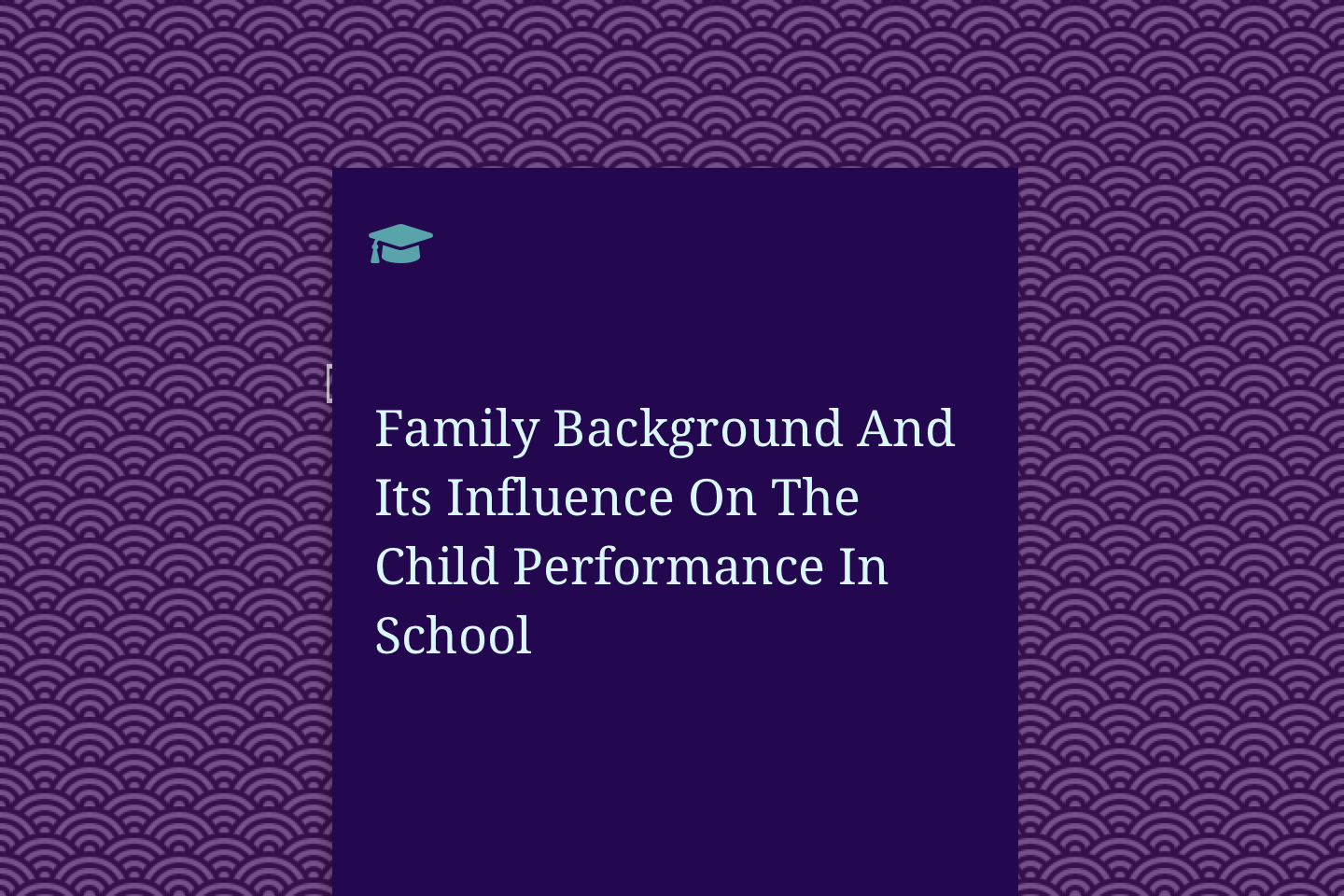 Education is arguably the most important social institution in any modern society. It is a major social determinant of almost all aspect of life (Fischer and Hout, 2006). Success is education is measured according to academic performance over the years. Unequal distribution of education among students is a form of social inequality. Education is a mechanism through which parent transmit their social advantages or disadvantages to children inter-generationally (Blau and Duncan, 1967). Education is a basic tool used by society for transmission of its societal values.

Every parent or family is happy to find its child performing excellently in academics. It is the responsibility of the family to provide all the needed support in the upbringing of the child. Beil (2000) opined that parent devote a lot of resources to their children because they believe good academic performance will provide a stable future for them.

The central role of the family in affecting children’s educational attainment is given. Families are important to provide safe, nurturing environments in which children can learn to function in society. A growing number of study confirmed that family background, especially in early childhood exerts strong influence on children’s educational outcome. Adeyemi (1997) noted that if the house fails to provide the child with the necessary equipment to fit him/her into a proper place in the society and guided properly for his/her future career, then the child is damaged. Economic position of parents is one of the major factors that can greatly influence the educational upbringing of the child.

The issue of pupil’s performance in schools has been of concern ever since modern education was introduced. The impact of family background on the academic achievement of pupils in schools today is gaining attention lately in educational circles of the world. Family is a group of people related either by consanguinity (by recognised birth) or affinity (by marriage or other relationship). The purpose of families is to maintain the well-being of its members and of society. As the basic unit for meeting the basic needs of its members, it provides a sense of boundaries for performing task in a safe environment, ideally builds a person into a functional adult, transmit culture and ensures continuity of humankind with precedents of knowledge.

However it is disheartening to note that the poor performance of students in schools is attributed to parental background. Education is paramount, children with high academic performance tend to succeed in life. Education is one of the most important aspect of human life especially in this modern era where educational qualification obtained is inquired of when been considered for a job by employers. The educational system of Nigeria have been in crisis for many years ranging from the problem of presence of unqualified teachers in the educational system to the problem of lack of infrastructural facilities, negative attitude of students towards learning, parental background is also a major cause.

Most students in Nigeria are in greater risk of poor academic. Education is the best legacy a parent can give its children. The development of the nation start from the family. Various factors have been identified as the cause of continuous declining of the educational system of Nigeria such as inadequate infrastructural facilities. With the availability of more qualified teachers, improved technology and facilities for teaching and learning, educational system is still losing her values.

Parent’s involvement is highly related to their children success in education. The educational system of Nigeria is still faced with a lot of problems. Some of the problems include student learning skills, parental background, peer influence, teachers’ quality, learning infrastructure among others. The educational sector is responsible for performing several vital works in any economy. The various experts of various fields have to pass through the educational system to become one.

Academic performance is an essential factor in educational achievement. It is discouraging to note that Nigeria students still perform poorly. Although, for some time now it appears government have tried various methods in resolving the issue.

It is against this backdrop that the researcher considered the study of family background and its influence on the child performance in school.

The aim of this study was to investigate on family background and its influence on the child performance in school. The specific objectives are to:

The critical nature of educational to the success or growth of any economy is given. Empirically, this study is carried out to investigate the family background and its influence on the child performance in school so as to ameliorate the problems associated with it. This study will be important to the family, society and government.

This study will be of utmost importance to investors, government and the researchers because it will provide policy recommendations to the various Nigeria stakeholders taking adequate measures in educational sector.  It is hoped that the exploration student performance will provide a broad view of the operations of the educational system to investors and government. It will contribute to existing literature on the subject matter by investigating empirically the role of family in academic successes. This study will be of benefit to;

Government: this study will reveal to the government happenings in the educational sector. Formulation and implementation of policies based on this findings would ensure development in the sector.

This study is intended to investigate the family background and its influence on the child performance in school, using some selected schools in kwali area council of FCT.

ASSESSMENT OF THE INFLUENCE OF OCCUPATIONAL ROLES AND HOUSEHOLD TASKS ON HOME ECONOMICS FEMALE LECTURERS’ PERFORMANCE IN COLLEGES OF EDUCATION, NORTH-WEST, NIGERIA