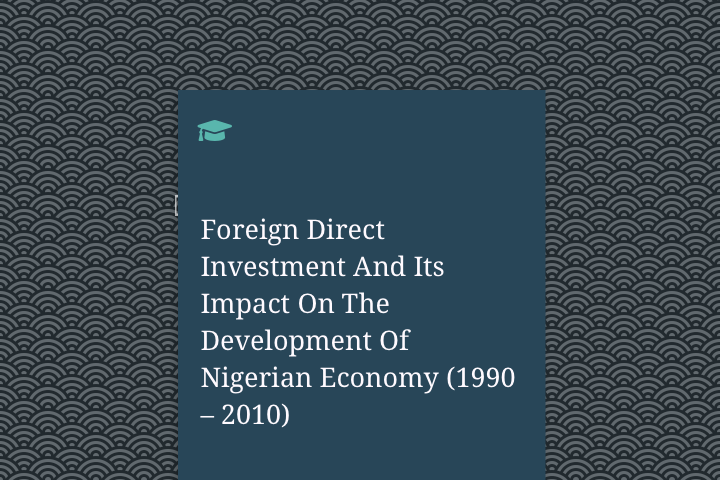 Generally, policies and strategies of Nigerian government towards foreign direct investment are shaped by two principal objectives of the desire for economic independence and the demand for economic development. Multinational corporations are expected to bring into Nigeria foreign capital in the form of technical skills, entrepreneurship, and technology and investment fund to boost economic activities thereby raising the standard of living in Nigeria. The main issues in this paper relates to understanding the effects of foreign direct investment on the Nigerian economy as well as our ability to attract adequate amounts, sufficient enough to accelerate the price of our economic growth and development. From related research and studies, it was revealed that multinational corporations are highly adaptive social agents and therefore, the degree to which they can help in improving economic activities through FDI will be heavily influenced by the policy choice of the host country.
Therefore this project research topic examines FDI and development of the Nigerian economy from 1990 / 2010, a period o 20 years, using an ordinary least square  method of regression, the trade o relationship between FDI and GDP in Nigeria was examined, the result showed that FDI has a positive relationship with GDP and a positive change in FDI will increae GDP by 50.594 and also the nature and magnitude of FDI can be determined.

Since Nigeria got her independence in 1960, it has created policies which are geared towards promoting the Nigerian economic growth and development by influencing domestic investment or indirectly policies which are aimed at stimulating the flow of finance in any growing economy. This is so given that in the literature there are divergent views on the nature of effects of foreign direct investment. It has been argued to be the most growth stimulation sources of foreign finance in any growing economy. There are divergent views on the nature of foreign direct investment on host economies. There are views that foreign direct investment produce positive effects on host economies and they argue that some of the benefit are in the form of externalities and adoption of foreign technology. Employers training and introduction of new process by the foreign firms.
Developing countries in Africa, Asia and Latin America have come increasingly to see that foreign direct investment is a source of economic development, modernization, income growth and employment and poverty reduction. These  countries are successfully developing their economies under outward oriented policies albeit in varying degrees.

Globally economists tend to favor the free flow of capital across national borders because it allows capital to seek out the highest rate of returns. Nigeria is reputed to be buoyantly blessed with an enormous minerals and human resources but believe to be at a high risk market for investment. Foreign direct investment can also be veritable booster to an economy (Omagbemir 2010). Nigeria in the past and present has a large population and enlightened market. A real potential market, an investment conscious society and a conclusive sustainable environment for foreign private investment to thrive in the development of the economy. Foreign direct investment can be described as investment made so as to acquire a lasting management interest (for instance 10% of voting stocks) and at least 10% of equity shares main enterprise operating in another country other than that of investor country(Willima 2003, World Bank 2007). Policy makers believe that foreign direct investment (FDI) produce positive effects on host economies. Some of these benefits are in the form of externalities and adoption of foreign technology. Externalities can be a form of licensing agreement, limitation,  employee training and introduction of new processes by the foreign firms (Alfaro 2006).
According to Utomi (2007) foreign direct investment (FDI) via transnational corporations do posses the needed capabilities which can be put to the services of growth in any host economy.

One of the major economic problems in less developed countries (LDC) is low per capital formation to finance the necessary investment for economic growth. Capital was once regarded by most economists as the principal obstacle to economic development and this made a lot of attention to be paid to capital formation. The role of capital in economic growth is still regarded as very crucial.
Both the theory of “big push” and the concept of “vicious cycle” are all a test to the crucial role of capital in the growth process. The theory of big push simply states that the stagnant and undeveloped economies need huge and sudden injection of large capital from foreign direct investment.
However in the literature FDI is found to be related to export growth while human capacity building is found to be related to FDI floe.
Most studies on FDI and growth are cross country studies. However FDI and growth debates are country specific. Among Nigeria, studies like those by Otepola (2002), Oyeyide (2005), and Akinlo (2004) examined the importance of FDI on growth for several periods and the channel through which it may be befitting the economy.

In the literature there exist, a direct positive link between export growth and the growth of an economy. This growth in export can further be traced down to the level of investment which in most cases can be domestic or foreign investment  This is so given that foreign capital remains the best option to filling the saving investment gap where it exists. Given this fact assessment will be based on the existing link among investment, export, exchange rate and economic growth.

Based on the objective of the study the following research questions are necessary or the formulation of hypothesis
1. Does the FDI have a significant impact on the development of the Nigeria economy?
2. What is the nature and magnitude of the FDI on economic growth in Nigeria?
3. Are there enough incentives by the governed to encourage the flow of FDI

The objectives of the study are as follows
I. To find out whether or not FDI has a significant impact on the growth of the Nigerian economy
II. To determine the nature and magnitude of the impact of FDI on economic growth in Nigeria
III. To ascertain the adequacy of the level of fiscal incentives given to foreign investors by the Nigerian government

It is hoped that this study will act as a reference point for policy debate in the idea of FDI in our economy.
On the whole it is envisaged that the research findings will be of the following specific significance.
1. It will serve as a guide to economic policy makers and planners in future decisions concerning FDI
2. It is equally hoped that the findings and recommendation of this study will be of immense benefit not only to the government but also to other researchers and students for future research undertakings

Its focus is to verify if there is any contribution made toward economic growth and development of Nigeria economy via gross domestic product (GDP) through foreign direct investment for the period 1990-2010. It will be limited to investigate the impact of FDI in the development of Nigeria economy. Government also sought for measures to enhance economic development and inflow of foreign direct investment into the country to reach its peak.