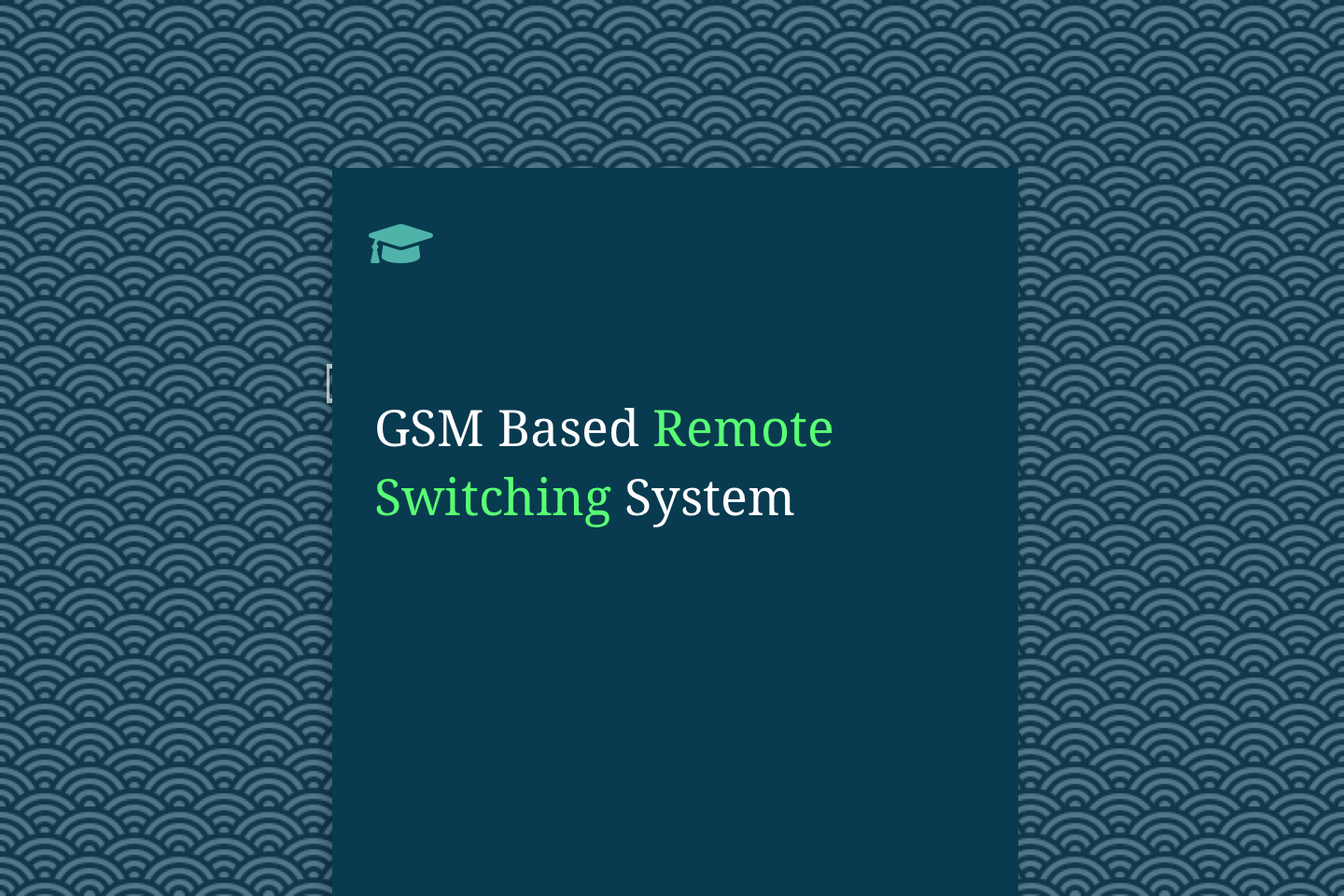 Has technology transformed humankind into omniscient being? Years back, communication was done through difficult means like travelling to the destination of the second party, posting letters est. Today people can communicate easily through various means like e-mailing, face booking, GSM etc. The new age of technology has redefined communication, most people nowadays have access to mobile phones and thus the world indeed has become a global village. At any given moment, any particular individual can be contacted with the mobile phone. But application of mobile phones cannot be restricted to sending SMS or starting conversation. New innovation and ideas can be generated from it that can further enhance its capabilities. Technologies such as infra-red, Bluetooth etc which has developed in recent years goes to show the very fact that improvement are infact possible and those improvement have eased our life and the way we live. Remote management of several home and offices appliances is a subject of growing interest and in recent years we have seen many systems providing such controls.

These days, apart from supporting voice calls, a mobile phone can be used to send text message as well as multimedia message (that may contain pictures, graphics, animation, etc). Sending written text messages is very popular among mobile phone users. Instant messaging as it is known, allows an  individual to share ideas, opinions and other relevant information. I haveused this to design a system that allows a platform to receive calls which infact are commands sent to control different appliances and device connected to the platform. The design of this control system system is based on the GSM technology that effectively allows control from a remote area to the desired location. The application of the suggested system is immense in the ever changing technological world. It allows a greater degree of freedom to an individual whether it is controlling the household appliances or office equipments. The need to be physically presenting order to control appliances of a certain location eliminated with the use of this system. The research is borne out of the need for man to control electrical devices that are remotely located to him. Anything from home devices such as alarms, heaters, air conditioner and so on, IT equipment such as routers and servers can be controlled. The desire for man to control an object that is remotely located to him has been for many ages. However, the technology that meets the perfect desire in  this respect has not been obtained, though there is increasing improvement in technology that struggles to meet this need in terms of accuracy, speed, ease of operation and limitless operation point. The introduction of the global system for mobile communication (GSM) and particularly the use of handheld mobile phones brought the innovation of distance communication at remote location. Based on this, research utilizes this facility for remote control of systems and appliances, take for instance, a man on a journey inside his car suddenly remembers that he left the air conditioner (AC) ON when it was supposed to be OFF. The normal condition is to drive back and switch OFF. But with the GSM mobile phone in the hand, one looks on how the same could be used to effect control at any point and time.

Technology has advanced so much in the last decade or two that it has made life more efficient and comfortable. The comfort of being able to take control of devices from one particular location has become imperative (i.e. important) as it saves a lot of time and effort. Therefore there arises a need to do so in a systematic manner which will be implemented in the proposed system. The system is an extended approach to automating a control system. With the advancement and breakthrough in technology over the years, the lives of people have become busier than before. With the adoption of this  system, we can gain control over certain things that require constant
attention. The application of this system comes in handy when people who forget to do simple things such as turn ON or OFF devices at their homes or at their offices. They can now d so without their presence by the transmission of a simple call from their mobile phone. This development , I believe will ultimately save a lot of time especially when people do not have to come back for simple things such as to turn ON or OFF at their homes or at their office once they set out for their respective work or appointment.

The project “GSM control system” as the title suggests is aimed to construct  control system that enables the complete control of the interface on which it is based.
General objectives of the project are :

a. To co-ordinate appliances and other devices through calls.
b. To effectively receive and transmit data via calls.
c. To eliminate the need of being physically present in any location for tasks involving the operation of appliances with household/office.
d. Minimize power and time wastage.
e. It allows a great degree of freedom to an individual.

o The proposed project can be used as a reference or as a base of realizing a scheme to be implemented in other project of greater level such as device synchronization, temperature updates, weather forecasting etc. o The project itself can be modified to achieve a complete home automation system which will then create a platform for the user to interface between himself and the household.
o It can be used by companies for management purpose example is switching
ON/OFF the server in other to manage the bandwidth.

The project covers the aspect of just being able to switch ON/OFF any electrical appliance connected to the circuit.

The project is designed to have five chapters, which will explain in details the various aspects of system. The first chapter gives an introduction to GSM control system along with the project aims and objectives, with emphasis to the scope in order to achieve the desired goal and limitations to the study. Chapter two is on literature review which contains a review of previously implemented systems.
Chapter three contains the details of the entire major component that were used in the actualization of the hardware part of the project. Chapter four deals with the implementation and the testing, the chapter contains the major work of the project.
Chapter five summarizes and concludes the project work on GSM – Based Remote switching system. Recommendations are also stated.