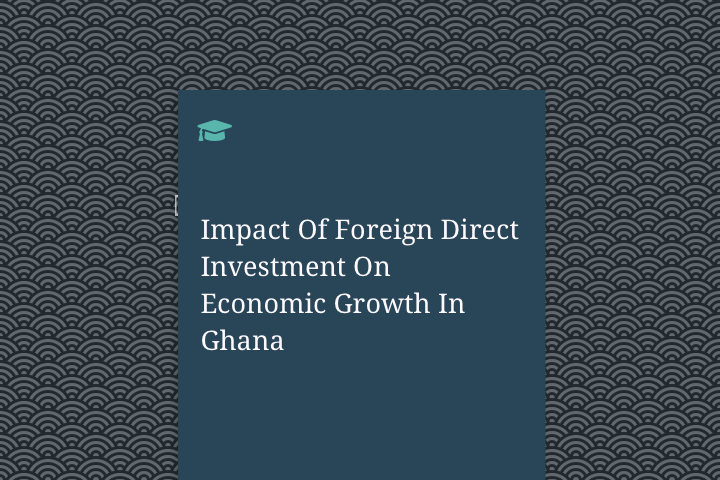 Impact Of Foreign Direct Investment On Economic Growth In Ghana

Over the past decades, one of the objectives of policy makers in Ghana has been the maintenance of economic stability that supports the growth of her economy. Ghana economic strategy since 1992 has focused on macroeconomic stabilization and structural reform in a democratic environment. Economic growth and development in a country should not be overemphasized.

Studies have shown that inflow of foreign direct investment (FDI) can be quite beneficial for the host economy. This applies particularly to developing economy, it’s a generally acceptable means of incorporating new knowledge from abroad. The effect of FDI in the host country varies depending on the particular country and the policy environment (Nunnenkamp and Spatz, 2004). Several works of literature have emphasized the significance of FDI as a capital creator for development project in West African countries (Borensztein, et al, 1998; Acemoglu, et al, 2006). Contries therefore develop strategies to attract more FDI into their economies (Mengistus and Adams, 2007).

To attract FDI inflows, developing countries have generated economic agendas such as tax concessions, provision of loan at low interest rates, grants, allocation of subsidies, increased investment on infrastructure, development of export processing zones and other concessions (Raheem and Oyinlola, 2013). Various policy regimes have been implemented by Ghana government to carry out market-friendly economic reform programmes, such as the implementation of the Economic Reform Programme (ERP) in 1983, the adoption of the Mining Code in 1986, the enactment of the Investment Code in 1994 and the Free Zone Act in1995. Ghana has greatly improved the business environment for foreign and domestic investors.

FDI is seen as a cross-border investment which are made by investors with view of establishing lasting financial interest in an industry or enterprise and trying to exert a degree of influence on the operations of the enterprise and where the foreign investors holds an interest of at least 10% in equity capital (Duce, 2003). The inflow of foreign direct investment from foreign investing countries and individual investors into Ghana’s economy has been playing a major role in the development and well-being of the nation’s citizen and expatriates. Political pressure influence the allocation and distribution of FDI inflow into some sectors and regions within their economy at the expense of others.

While the variety of case study and small country comparison confirms the idea that FDI has a positive impact (King, 2000; King and Aleksandra, 2006), other researchers contend that FDI has had primarily negative implications for countries including the destruction of existing production networks, promotion of low-wage, low value-added manufacturing and permanent dependence on foreign economic actors. It is against this backdrop that this study research on the impact of foreign direct investment on economic growth in Ghana. An evaluation of FDI on economic growth especially in Ghana has recently received attention in literature. This is because a proper understanding of this impacts will be useful in the settings of liberalization policy.

1.2. Statement of the problem

Economic growth in a modern economy hinges on an efficient and effective financial sector and political environment that encourages foreign investment and mobilizes capital for productive projects. Absence of FDI could leave most productive projects which carry developmental agenda unexploited.

It is strongly argued that FDI can have strong positive effects on economic performance. However, after the prescribed reform agenda, the domestic economy has failed to experience impressive performance such as attraction of foreign investment or halt capital flight. FDI generates tremendous financial booms and busts in Ghana economy but these booms and busts have not intensified in the long-run. The debate over the macroeconomic effect of FDI on developing economies remains a controversial issue.

The reform agenda of Ghana lost some momentum in the late 1990s. Despite liberalizing investment rules and improving the business climate, Ghana did not receive as much FDI as the government has expected. Though absolute FDI increased in the 90s, they started from a low level between 1993 and 2005. Annual FDI inflows fluctuated between US $50 million and US $250 million.

This study will be based on the following Research Questions:

1.4. Objectives of the Study

The general objective of this study was to determine the extent to which foreign direct investment has led to economic growth in Ghana. To achieve this general objective, the following specific objectives will be examined.

This study will be of utmost importance to investors, government and the researchers because it will provide policy recommendations to the various Ghanaian stakeholders taking adequate measures in the economy for rapid growth and industrialization.  It is hoped that the exploration of the foreign exchange market, global market, official and parallel market will provide a broad view of the operations of the markets to investors and government. The changing character of the financial sector especially, the banking sector reforms and global financial crises that have both affected exchange rate and financial flows in recent times will push studies on foreign direct investment to new evidence(s). It will contribute to existing literature on the subject matter by investigating empirically the role which foreign direct investment plays in economic growth and development of the country. This study will be of benefit to;

Government: this study will reveal to the government happenings in the foreign exchange market, global market, official and parallel market. Formulation and implementation of policies based on this findings would ensure growth.

This research work is to examine the impact of foreign direct investment on economic growth in Ghana. The study covered the period of 1992-2018. This is due to the various policy regime where the country went through a major structural changes such as the Investment Code of 1994 and economic data could be recorded from that period.

This study is divided into five chapters. Chapter one is introduction which consists of the background to the study, statement of problem, research questions, research  hypotheses,  objectives  of  the study, the  significance  of  the  study,   the scope  and  limitations  of  the  study  and  finally the  organization of the study. Chapter two deals with the literature review which consists of the conceptual literature, theoretical literature, empirical literature, theoretical framework, gaps in literature. Chapter three gives the methodology including techniques of analysis of data, types and sources of data, method of estimation and model specification. Chapter four is presentation and analysis of results which contains the presentation of results, interpretation of results and summary of major findings. Finally, Chapter five gives the summary, conclusion and recommendations.