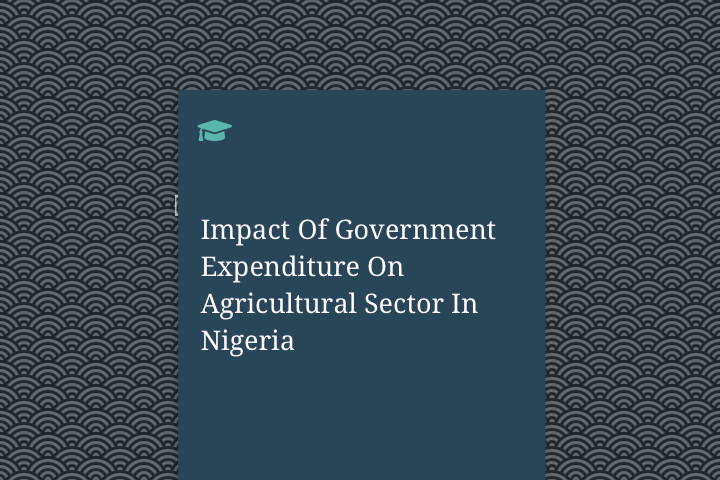 Prior to the discovery of oil boom of the 1970s, the importance of agriculture to the economic development of Nigeria is enormous owing to the fact that agriculture was the main source of food and employment for a sizeable number of the people. The Nigerian economy during the first decade after independence could be described as an agrarian economy because agriculture served as the engine of growth of the overall economy [Ogen, 2003]. Until the exploitation of oil reserves in 1980s, Nigeria’s economy was largely dependent on agriculture. Akinboyo [2008] defines Agriculture as the science of making use of the land to raise plants and animals. It is the simplification of nature’s food webs and the rechanneling of energy for human planting and animal consumption. It is not an overstatement to assert that the growth and development of any nation depend, to a large extent, on the development of agriculture. Agriculture has serve as an engine of growth in the Nigerian economy.

The contribution of the agricultural sector to any economy cannot be over emphasized when considering its employment potentials and financial impacts. Nigeria’s wide range of climate variations allows it to produce a variety of food and cash crops. The importance of agriculture to the economic development of Nigeria is enormous owing to the fact that agriculture was the main source of food and employment for a sizeable number of the people.

In the 1960s, more than 80% of the rural population of Nigeria was engaged in one type of agricultural activities or the other and between 1963 and 1964, the sector contributed as much as 65% of the nation’s Gross Domestic Product (GDP) (Muftau and Gafar, 2003; Aina, 2015). During this period, Nigeria was the world second largest producer of cocoa, largest exporter of kernel and largest exporter of palm oil [Ogen, 2003], even though most of the small-holder farmers in Nigeria lack access to inputs to increase productivity. Rural farmers lack access to credit facilities, fertilizers.

Over the past two or three decades, the dormant role of agriculture in the economy, especially in terms of ensuring food security, gave way to massive importation of basic food [Egbuna, 2003], this is a clear indication of the failure of the agricultural sector in performing its duties of food production. Government expenditure, which serves as the bed rock of financing of the agricultural sector has consistently decline. A collaborative study carried out by the International Food Policy and Research Institute (IFPRI) and the World Bank in 2008 revealed that Nigeria’s Public expenditure on agriculture is less than 2% of total federal annual budget expenditure. In realization of this, the government has embarked on various policies and programmes aimed at strengthening the sector in order to continue performing its roles.

In a bid to correct this anomaly, the government, from the year 1975 decided to directly participate in commercial production of food crops. The Nigerian Agricultural and Corporative Bank (NACB) was established in 1973 as part of government’s effort to channel oil fund into agriculture sector [Olagunju, 2000]. Various agricultural development programmes were also adopted as part of efforts to revitalize agricultural performance. These were backed up by substantial budgetary allocations, but agricultural output is still very low [Ojo, 1991].

Despite numerous agricultural programmes like Agricultural Credit Support Scheme of 2006; FADAMA Development Programmes among others, productivity has not improved (Oriola, 2009). Take for instance, despite the huge amount invested in FADAMA Rice programs, Nigeria is still spending huge amount on rice importation.

Notwithstanding the enviable position of the oil sector in the Nigerian economy the agricultural sector is arguably the most important sector of the economy.

In spite of Nigeria’s rich agricultural resource endowment, there has been gradual decline in its contributions to the nation’s economy, the sudden decline in the agricultural sector was largely due to the rise in crude oil revenue in the early 1970s. Categorically, the state of agriculture in Nigeria remains poor and largely underdeveloped which is due to the lack of sufficient public and private expenditure in boosting agricultural production, the sector rely on primitive methods of production as compared to the sustained growth of the Nigerian population. This has reflected negatively on the productivity of the sector, as well as its ability to perform its traditional role of food production among others.

This study therefore is set to determine the contribution of government expenditure to agricultural production in Nigeria.

This study will be based on the following Research Questions:

1.4. Objectives of the Study

Government: formulation and implementation of policies based on this findings would ensure growth.

Investors: this study shall also be valuable to the investors, it shall guide their private investment decisions.

This research work is to examine the impact of government expenditure on agricultural sector in Nigerian. The study covered the period of 1986-2017.

This study is divided into five chapters. Chapter one is introduction which consists of the background to the study, statement of problem, research questions, research  hypotheses,  objectives of  the study, the  significance  of  the  study,   the scope  and  limitations  of  the  study  and  finally the  organization of the study. Chapter two deals with the literature review which consists of the conceptual literature, theoretical literature, empirical literature, theoretical framework, gaps in literature. Chapter three gives the research methodology including techniques of analysis of data, types and sources of data, method of estimation and model specification.  Chapter four is presentation and analysis of results which contains the presentation of results, interpretation of results and summary of major findings. Chapter five gives the summary, conclusion and recommendations.