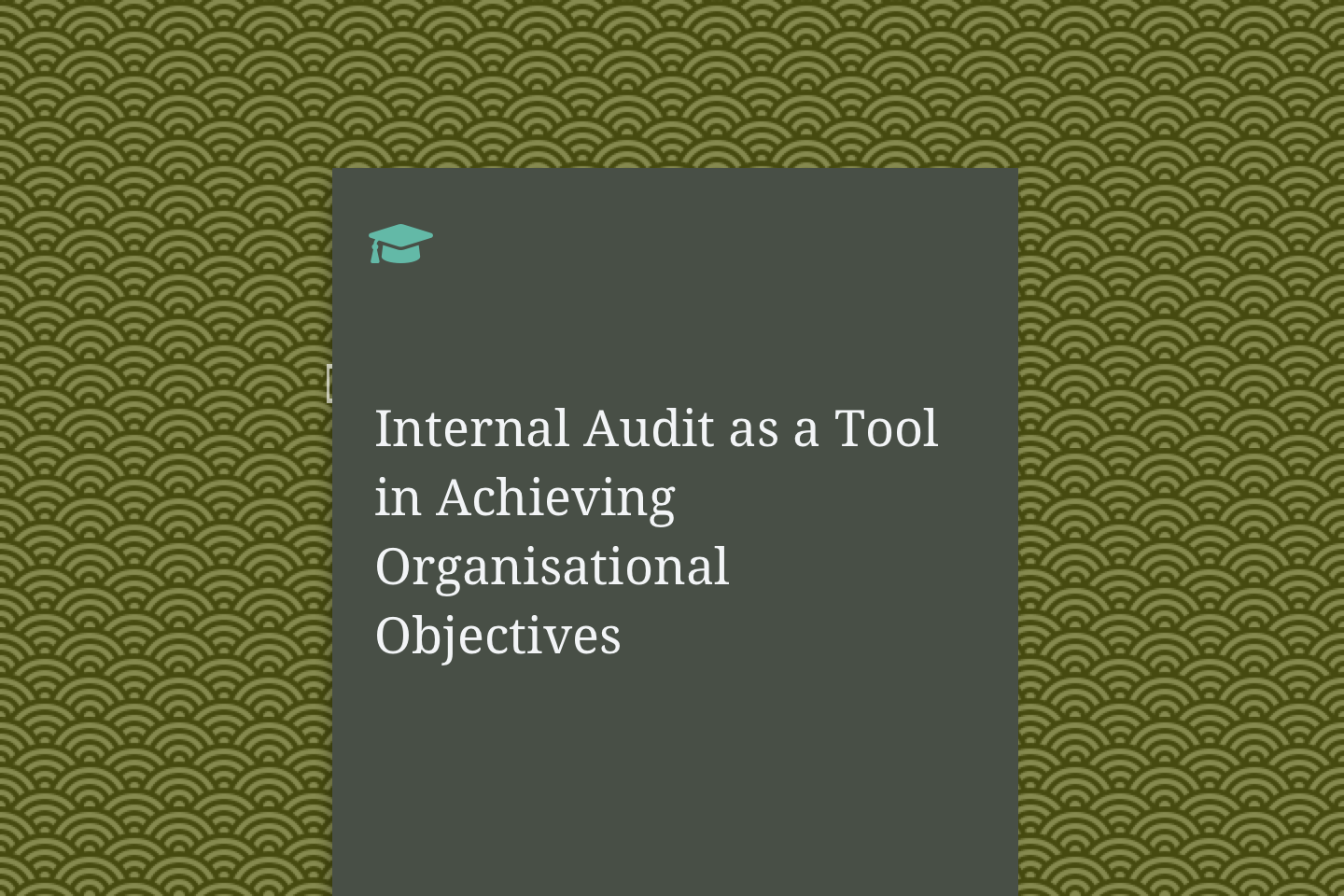 The system of controls adopted in any economy greatly determines the development and growth of that economy. To ensure optimization in money, materials, machine, time, resources and management of men, controls are essential.

These controls are installed by many organisations including banks to check how effective and efficient they maximize their resources. One of such controls commonly used to minimize wastage and guide plan to their eventual accomplishment is “INTERNAL AUDITING”.

Auditing has been in existence for many years, it was in ancient Egypt and the great mercantile establishment of the middle ages. This shows that internal auditing can neither be neglected nor under rated in our modern economy for it was borne of the complexities of modern business dominate and transactions involved. In that, other management of various large businesses, organisations and government concern recognised internal auditing as valuable machinery and achieving and objective deemed accurate at a point in time.

The term “Audit” is from a Latin word “Audire” which means “Hears”. This is because the accounts of an estate domain were checked by having them called out of these who completed them to those in authority. With the growth of trade and commerce the need for more accurate methods of recording business activities arose. Auditing is a process whereby the books of account and vouchers of business entities (including charity users/trusts) are subjected to critical examinations by professionally qualified and independent account (Auditors) on such a detail will enable them from an option as to their truth and fairness. The auditing is the bridge across the credibility gap created by the separation of management from ownership.

The complexities of the art of management extends to increasing ware of business fraud, embezzlement and the cash squeeze which often cripple many companies. The management has to look inward in order to uphold the space of activities and keep abreast with the changes in their immediate and external environment, and this can only be achieved as good and effective internal control system of which internal auditing is a major section. A writer maintained that the existence of an efficient and effective system of internal control both in design and operation which is the responsibility of management with the best to prevent fraud or at worst help to detect such fraud at the earliest opportunity.

It is a function carried out by an independent staff in audit department with the sole aim of reporting on fairness and truly of financial statement. However since the internal auditors are employee of the firm or the establishment concern, independence is not always achieved.

The comprehensive courage of an internal audit upon several factors, a general rule is that department should of course have as much freedom as possible without interference from the management. In such circumstances; the internal auditors will have a greatly enhanced share in recommending new and concluding investigations where appropriate. The terms of reference should be defined as lack of this may lead the department and those in another.

To avert this ugly incident and ensure greater coverage during investigations, management issues guidelines to heads of divisions to always make necessary documents/records/files available to audit staff as may be demanded by them while performing their duties. A proper audit work should be able to:

Review the accounting systems as related to internal control. Examine the economy or review the economy efficiency and effectiveness of operation.

Examine financial and operating information for management Review the implementation of cooperate policy plans and procedures.

Internal audit functions can help to spot out differences in systems, so as to evolve corrective measures at the earliest opportunities. Internal auditors appraise, analyse and report upon the policies and methods employed in the bank.

The duties of internal auditors to the general performance of the whole organisation cannot qualify; maintain a good internal control system maintained by qualified chartered accountants.

Internal control system may be insufficient based on some predicament. These may include lack of segregation and assignments of duties of accounting staff. Also the scopes of duties of internal audit unit are so wide and their scales of operations so low as well as the shortage of qualified staff to carry out internal auditing and accounting duties.

Independence of accounting officer can easily be influenced by management which can affect the internal audit system of an organisation clearly defines as a result of two or more dishonest staff can collide to override the efficiency of the internal control system. The criticism of internal control system has been extended to the banking industry hence the study of internal audit as a tool for effective management.

Other objectives of this study are as follows:

Ho; internal audit is not a source of help to prudent management operations.

H1; internal audit is a source of help to prudent management operations.

Ho; internal audit department is not a base for achieving value for money audit

H1; internal audit department is a base for achieving value for money audit

Due to the ignorance of the public as to the contribution of internal audit department to efficient management makes this study essential. This is the form at which the public believe that internal audit is not necessary as it delays job, while some sees it as the only way to detect frauds and misappropriation of funds in a firm/organisation.

So this project will make clear, the merits of having a source of internal audit, which benefits and how such benefits comes.

Secondly, the inability of workers to effectively and efficiently utilize resources and lack of proper control mechanisms has led to wastage of human resources, time, and finance and material resources. This study will help management in bringing about greater efficiency and effective use of resources and the same management cost. E. Woo [1988] (FCA) if maintained that great deal of the work of an internal auditor is curled with the evaluation of systems internal checks, conservations with officials (the results of when, was later confirmed by examinations of records) and general stripling of records. This study makes more insights into the differences in current internal audit practices in the banking system and suggests useful innovation for making necessary changes in both the organisation and implementation into internal audit functions as it contains and obtains in Afri-bank plc.

Lastly, this will at most expose the benefits of this great department to companies who do not have such, so that they can establish this control department without delay.

This is of the view at which internal auditors helps organisations/firms/companies get back to achieving their goals/objectives.

Various measures of internal control system are considered in Mainstreet bank, but more concentrations would be made on internal audit aspect for the purpose of this study. Accounting systems and related internal control measure the position, the independence of the auditors as well as the scope of his workers is here to be studied.

Certain problems and limitations are expected to face the study, such problems are lack of resources or time to study or go around other divisions of the bank.

It is necessary that clear definitions of some technical terms and words are given to avoid any possible confusion that may arise because of their usage.

Management And Control of Inventory in Government Health Institution