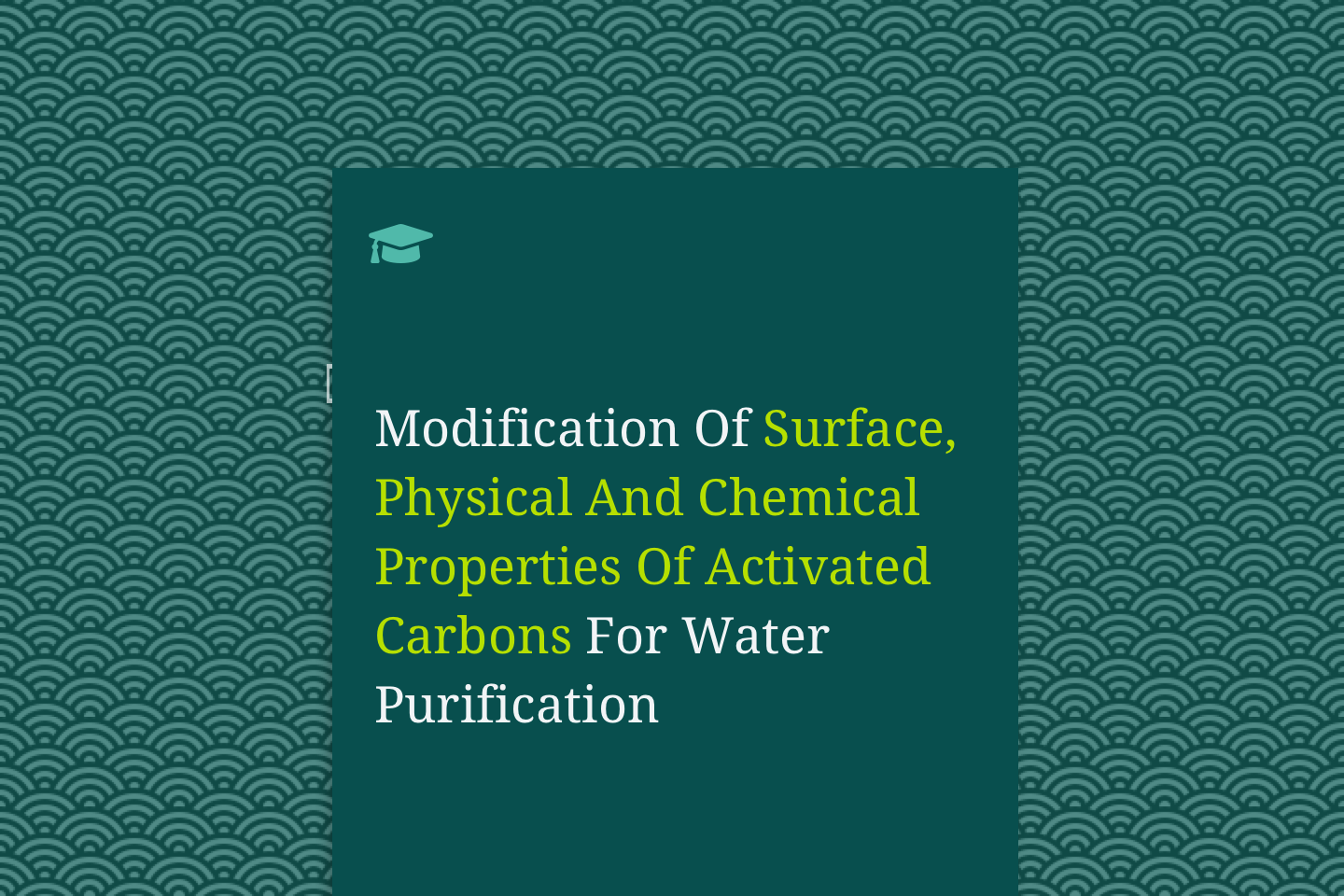 The purpose of this work was to study the effect of chemical surface properties of activated carbons for their use in water purification. To achieve this objective, activated carbon in both granular and powdered forms namely: as received and devolatilized carbons were prepared. Proximate analysis of the carbon materials was performed. Mass titration experiments were carried out to determine the point of zero charge of the activated carbon materials. Again, using an ultraviolet spectro photometer, the adsorption of phenol on as-received and volatilized activated carbon was investigated. Adsorption isotherms were acquired from which the monolayer adsorption capacities were calculated.

1.1 ORIGIN AND NATURE OF ACTIVATED CARBON

Carbon is the fifteenth most abundant element in the earth’s crust and the fourth most abundant element in the universe by mass after hydrogen, helium and oxygen. Scientists, industries, and consumers use different forms of carbon and carbon containing compounds in many ways such as activated carbon or carbon in its active form which can be used to purify water, among others.
Activated carbon is a form of carbon that has been produced to make it extremely porous and thus have a very large surface area available for adsorption or chemical reactions.

It can be defined as a microcrystalline non-graphitic amorphous form of carbon which has been processed to develop a high internal porosity due to its network of inter-connecting pores.

The history of activated carbon is dated since the fifteenth century, during the time of Columbus when sailors used to blacken the inside of wooden water barrels with fire, since they observed that the water would stay fresh much longer. It is likely that people at that time proceeded by intuition only without having any  insight into the mechanism of the effect. The mechanism was recognized
beginning from the eighteenth century.In 1862, Lipscombe prepared a carbon material for purifying portable water. This development paved the way for the commercial application of activated carbon  first for portable water and then in waste water sector.

1.2 METHODS OF MANUFACTURE OF ACTIVATED CARBON

Chemical activation is generally used for the production of activated carbon from sawdust, wood or peat and uses chemicals for activation. Chemical activation technique involves mixing an inorganic chemical compound with the carbonaceous raw materials and the most widely used activating agents are Phosphoric acid and Zinc Chloride.

Steam activation technique is generally used for coal-based, coconut shell and grain-based activated carbons and uses gases, vapors or a mixture of both for its
activation. Thermal processing technique is a separation process that removes unwanted materials from the carbonaceous precursor used under varying heat applications.

This technique is at a lower cost compared to the two techniques above and meets all environmental standards, while others need expensive solutions to achieve the same results.

The need for present investigation of this material cannot be over emphasized. This is as a result of the pressing need for treatment of waste water emanating from
domestic and industrial concerns. Activated carbon plays an important role in the purification of fluids (water),
including vegetable oils used in domestic cooking and as a precursor in industrial manufacture of food products. The slow pace of technological development in the
country has resulted to the expenditure of the nation’s resources on importation of  ctivated carbons to meet the demand for local chemical and process industries, as well as the demand for municipal and industrial water treatment plants.  Rapid industrialization, together with the increase in modern methods of
agriculture and the increase in population, has contributed to the pollution of the ecosystem. Most of the pollutants are toxic to living organisms. It is therefore
imperative that waste water has to be treated to remove the toxic materials before disposal to the environment. Most methods of treating water have some inherent
shortfalls. Activated carbon treatment was therefore developed because of its effectiveness in pollutants removal, especially in water purification.

1.4 OBJECTIVES AND SCOPE OF THE STUDY

The primary objectives and scope of the present investigation include the
following: