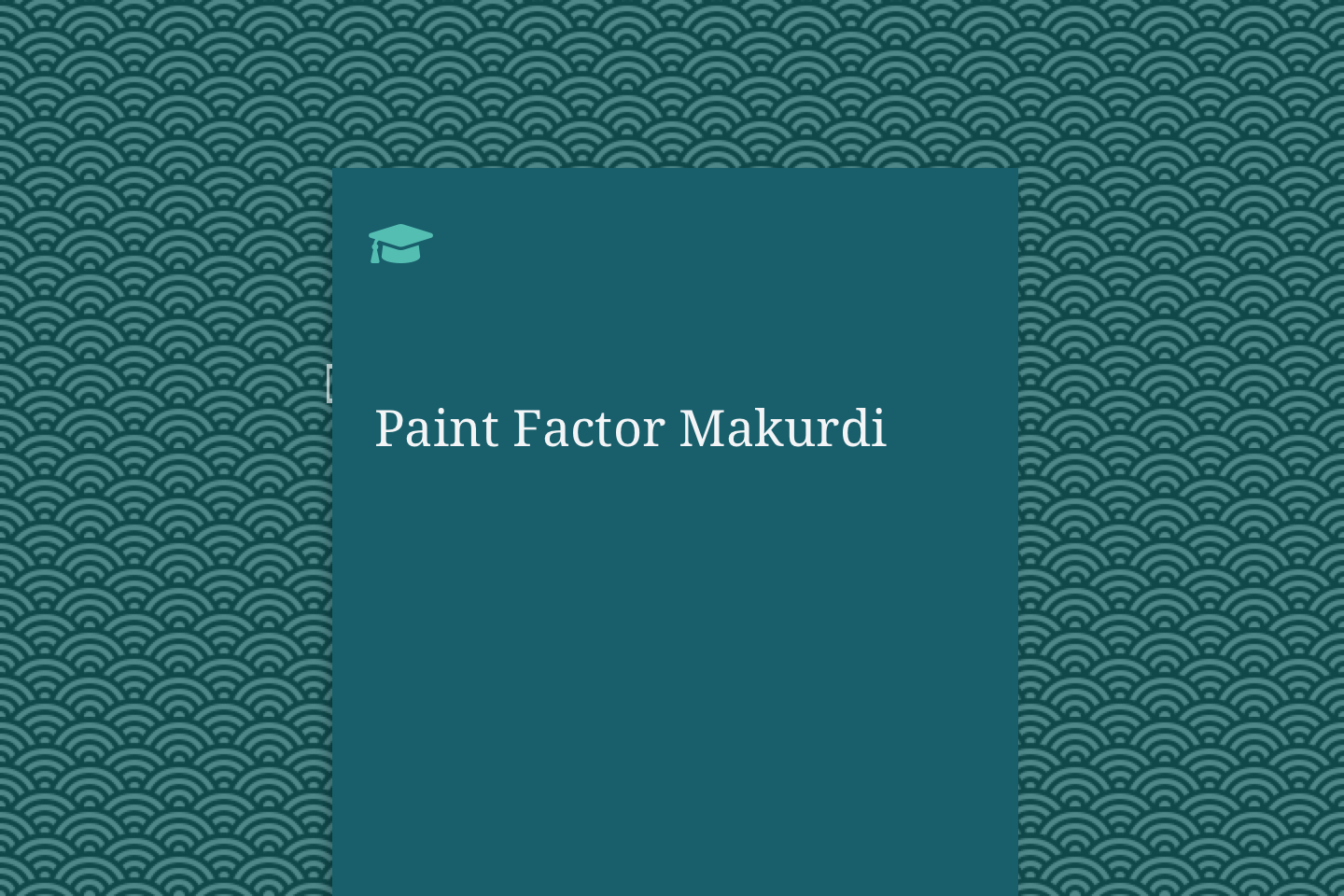 BACKGROUND TO THE STUDY

Paint Factory or plant is an industrial site, usually consisting of buildings and machinery, or more commonly a complex having several buildings, where workers process raw materials into paint.

Factories arose with the introduction of machinery during the industrial revolution when the capital and space requirements became too great for cottage industry and workshops.

Paint is a subdivision of surface coating. It is a relatively opaque solid coating applied as thin layer whose films are usually formed by polymerization of polyunsaturated oil. However, other subdivisions of surface coating include: varnishes (clear coating), enamels (pigmented varnishes), lacquers (film formed by evaporation only), printing inks and polishes. Paints generally have very low thermal conductivity, electrically inert and can be washed and cleaned. The various raw materials for making paints include pigments, vehicle, alkyd resins, surfactants, solvents (thinners) and colouring matters.

Resin based paints (Gloss finishes) and Latex based paints (Emulsion paints). The major difference between the two is only in the types of vehicle used and cost.

Classically, emulsion is a suspension of one phase in another. Latex paints have as their major film forming constituent synthetic resin latex with or without other film forming constituents added in an oil-water emulsion type system. The continuous phase consists of an alkali – dispersed hydropholic colloid in water and contains two more different types of particles in suspension, styrene – butadeux (SBR) copolymer which was the original quality film former in emulsion paint. Polyvinyl acetate (PVA), acrylic and PVA acrylics copolymers have largely replaced SBR as film former.

From these, resins and latex are made objects with a wide range of colours and texture found in household wares, building materials, electrical and electronic appliances, automobile and aeronautics, clothing, building structures etc. in short it s difficult to imagine contemporary society without painting (colours).

Paints are the material employed as finishing for other materials. They are used to protect metals, timber and plastered surface from the effect of weather, heat, moisture, gases etc., thereby improving their appearance. Paints are classified into oil, water and cement and bituminom paints. There are also special paints used for special purpose e.g. heat resisting, fire proofing, chlorinated rubber paint etc.

Paint factory is regarded as an important or essential industry in many country because of it effect and function in the environment. Finally, this project (paint factory) will help in improving on the face lift of Makurdi as the capital of Benue State as well as the job opportunities which our teeming youths desire.

In an industrial building of this nature, it is impossible to solve all architectural problems involved. However, every building has a general architectural problem that has to be solved towards the realization of the design. But, there are some specific problems that are unique to individual projects, for example a paint factory.

Subsequently, the core problem this project seek to solve is centered on its purpose; a compromise between man and machine. And this involves a careful flow in the synthesis of:

The principal objective of this project is to provide an environment capable of meeting the needs of the people of Makurdi and Nigeria as a whole by providing them with a well defined paint factory which is ultra-modern and which will meet their several needs in terms of seeking a solution for good appearance and packaging of good products.

Establishing a house or a commercial space does not stop at having the edifice erected on a piece of land. This is since you have to make sure that your structure preserves its excellent condition so that you can enjoy your investment for a long time. There are many industrial methods that you can do to keep your home or your workspace in good condition, but one of the most effective steps that you should take is to have your walls re-applied with the right paint.

For decades now, net and sprays have been the only effective methods for controlling the mosquitoes that causes malaria and dengue. I think by introducing the factory, it will lay more emphasize on protection by inventing a way of embedding pesticide in microcapsule stirred into house paints. And this insecticide will be realized slowly from the paint and will remain effective for two to four years, while spray will be typically re-applied at least every 6 months. The paint will act like a vaccine for houses and buildings.

The minute amount of pesticides released from the paint won’t be harmful to people but will be devastating to insect.

The introduction or provision of paint factory in Makurdi will help to increase the effectiveness of other producing industries around e.g.

Therefore, one should realize that this material is utilized in many industries and that such service industry should be established for the propagation of other.

Finally, I intend to increase the awareness of this service industry in Nigeria, and that’s what prompted my motivation towards proposing this project.

And to satisfy the key words of the aims, the following are inevitable:

There will be a deviation from the old idea which emphasizes much on mass to a modern approach which gives emphasis on lines and planes (volume).

The factory will undertake on mass production basis, the manufacture of paints and other paint products. It will also consist of four major paints of an industrial building;

The administration comprises of offices, personnel and sales while

The welfare section includes the factory cline and staff canteen.

Other components include the maintenance block, staff and visitor’s parking spaces, warehouse for raw materials and finished products, delivery bays and yards etc.

To really collect important information towards the realization of this project and to make an important contribution to Architecture, some research activities had been carried out and data collected through;

In researching with the private factories it was discovered that the factories were over protective of their setting. They feared that their competitors might get hold of information given out for the research and have a hold over them. Some of them that co-operated discourage photographs.

Also the fact that the country is not in peace due to the Boko Haram and other threats, the factories are conscious and at the same time trying to protect their life and properties.

1.9 IMPORTANCE OF THE PROJECT

The importance or the breaks through this project hope to achieve are:

the factory began with the shop-connected residence as in Ancient Egypt, then the open air workshops and the home the home industry as in Greece. Then, some specialized craft and trades like metal smiting, carpentry, pottery, shoe making were home industry; therefore, operation were in dwelling houses.

When the need for expansion began, separate work shed from homes was realized. However, this did not survive for too long, for with the collapse of the Roman Empire, the industry reverted to its original dwelling-house status – the gradual detachment from home only started again with the emergence of the guild system between the 12th and 15th centuries.

By this period, the trades men were engaged in producing stained glass, pottery, tapestries and metal work in great quantities – all operations being carried out in small shops.

This stage was followed by the beginning of the 15th century, by the emergence of large city workshop; derived from the strong influence of the monasteries, and the basomial manors.

Then came the modern factory system during the 2nd half of the 18th century. This stage in the factory evolution was made possible by certain technological inventions like the Spinning Jenny, Samuel Cromptoris mule in 1779, Edmund Cartwrights power loom in 1785 and James Watts steam engine, also in 1785. Manufacturing at this stage developed to much a high level that the whole of Europe was ploughed into the great industrial Revolution.

The industrial Revolution with the use of capitation ushered in such keen completion among early industrialists that some old buildings and other available large spaces were acquired for loom shops and other industries. This was the period for birth of industrial architecture from the period of birth to the present day, Industrial Building Types or Industrial Designs has passed through three main stages;

By 1925, this last phase experienced a new architecture creation – INTERNATIONAL STYLE – which was first noticed in the industrial designs of Peter Behrens in Germany and Auguste Perret in France between 1911 and 1924.

These works and most other modern examples revealed the design philosophy of almost all today’s meritorious industrial building as an emphasis on lines and planes instead of mass. Standard design became:

Paint is a thin protective or decorative coat or a subdivision of surface coating. Painting, the art of laying colour on a surface, therefore necessitated the development of paint.

Paint was first developed in the prehistoric times when the early men recorded most of their activities in colours on the walls of their caves. These crude paints consisted of coloured earth or clays suspended in water. However, the use of paint dated as far back as 1500 B.C. when the earliest paint works discovered in caves of Lascaux, France, Attemira and Spain were believed to have been done.

The Egyptians artist, during the early civilization was a paint formulator. He devised his paint mostly from natural pigments from resins, chalk, tale, clay etc. this could be regarded as mixture. However, by 1500 B.C. they imported such dies as indigo and madder to make blue and red pigments. By 1000 B.C. they had developed a varnish from the gum of Arcacis tree (gum Arabic) which contributed to the performance of their arts.

Colored crayon pigments and clay binder were used in Asia, while before 600 B.C. calcined mixtures and organic pigments were developed.

During the medieval and classical period more specialized form of paint was developed. This is known as oil paint. The substrate is generally canvas although other surfaces may be used. The colour consists of concentrated pure pigments ground to a thixotropic paste in refined or bleached vegetable oil, generally linseed. The pigments have an influence on the drying rate uniform. This is done by making the vehicle of a fast-drying colour more saturated oil such as popyseed, and adding a small fraction or cobalt soap to the blacks and other slow drivers.

The discovery of oil paints brought a great improvement in the art of painting. The 15th Century brought with it the knowledge of perspective in which objects could be represented in three dimensions. In this period, however, and to a more partial extent even is the earlier classical epoch, efforts were being made to widen the horizon of painting and to embrace with it the scope of its representations not only solid objects in themselves, but much objects as a whole in space, in due relation to each other and to the universe at large.

It was reserved, however, for the masters of 17th century perfectly to realize this ideal art, and in their hands painting as an art of representation is widened out of its fullest possible limits and the whole of nature in all its aspects becomes for the first time the subject of the picture. The development of painting since the 17th century gave rise to the modern and more specialized method of paint production.