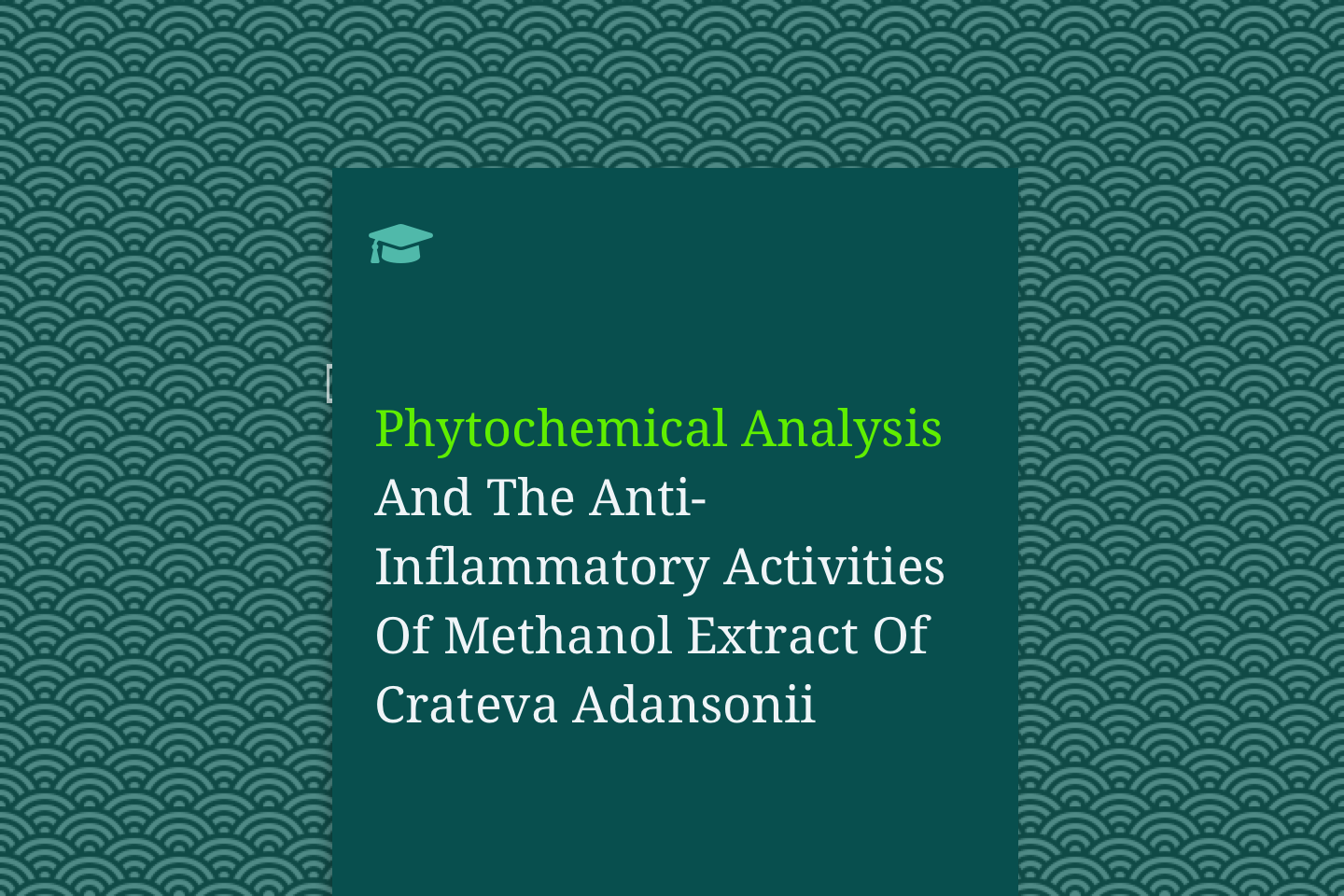 Inflammation is a complex biological response of vascular tissue to harmful stimuli such as pathogen, damage cells or irritants. The urgency generated by in increased rate of stroke, atheroselerosis attributed to prolong use of cyclooxygenase-1 and 2 inhibitors have acceralated anti-inflammatory drug research over the last decade while synthetic pharmaceutical agents continued to dominate research, attention increasingly has been directed to natural products. These are often more affordable and available and sometimes are perceived as more effective than conventional anti-inflammatory drugs.

Anti-inflammation was carried out using 11 rats. That was divided into three groups of four rats each. Group 1 and 2 served as the positive and negative control respectively. Groups 3 and 4 received 200mg/kg b.w and 600mg/kg b.w. of the extracts respectively. However, it was discovered that the stem bark of Crateva Adansonii showed greater significance anti-inflammatory activity when compared with the standard.

Anti inflammatory refers to the property of a substance or treatment that reduces inflammation. Anti –inflammatory drugs make up about half of analgesics, reducing pain by inhibiting inflammation as opposed to opioids, which affect the central nervous system published by Artemis Morris, molly Rossiter.

Inflammation (Latin, inflammo, “I ignite, set alight”) is part of the complex biological response of vascular tissues to harmful stimuli, such as pathogens, damaged cells, or irritants. The classical signs of inflammation are pain, heat, redness, swelling and loss of function by Dr Weil. Inflammation is a protective attempt by the organism to remove the injurious stimuli and initiate the healing process.

Inflammation is a setereotyped response and is considered as a mechanism of innate immunity by Dr. Weil.

Inflammation can be classified as either acute or chronic. Acute inflammation, is the initial response of the body to harmful stimuli and is achieved by the increased movement of plasma and leukocytes (especially granulocytes) from the blood into the injured tissues.

Prolonged inflammation, known as chronic inflammation, leads to a progressive shift in the type of cells present at the site of inflammation and is characterized by simultaneous destruction and healing of the tissues from the inflammatory process from Wikipedia, the free encyclopedia.

Crateva adansonii was described in 1824 by Augstin Pyramus de candolle.

Crateva adansonii is a specie of a flowering tree in the capparancea family, which is equally called the “sacred garlic pear and temple plant,” and many other names in a variety of dialects, including Balai lamoke, barnaj Vanina and bidasi. The tree is sometimes called the spider tree because the showy flowers bear long, spidery stamens. It is native to Japan,

Australia, much of South East Asia and several south practice Islands India it is grown else where for fruit, especially in parts of the African continents.

The fruit of the tree is edible. The flowers are attractive to a multitude of insects and birds. The butterfly (Hebomoia glaucippe) is a frequent visitor to this plant by Dr. Weil.

rateva Adansonii is a species in the genus crateva, which contains 8 species and belongs to the family of Capparacea (caper family)

The taxonomy of crateva adansonii for classification includes the following;

Crateva Adansonii can withstand temperatures only above 1 –

20C. The plants bloom from March to May.

Crateva adansonii is used in traditional medicine in the West Africa. The crude Hexane (CAN -1) and ethyl acetate activity has African trypanosome, Trypansomia brucei brikes and forms blood stream. The crude extracts showed moderate anti-trypansomal activity. It’s use alone or in combination with other natural/ semi –synthetic drugs for the treatment of human Africa.

From wikipedia, The free encyclopedia Bing pdf and articles of Health.