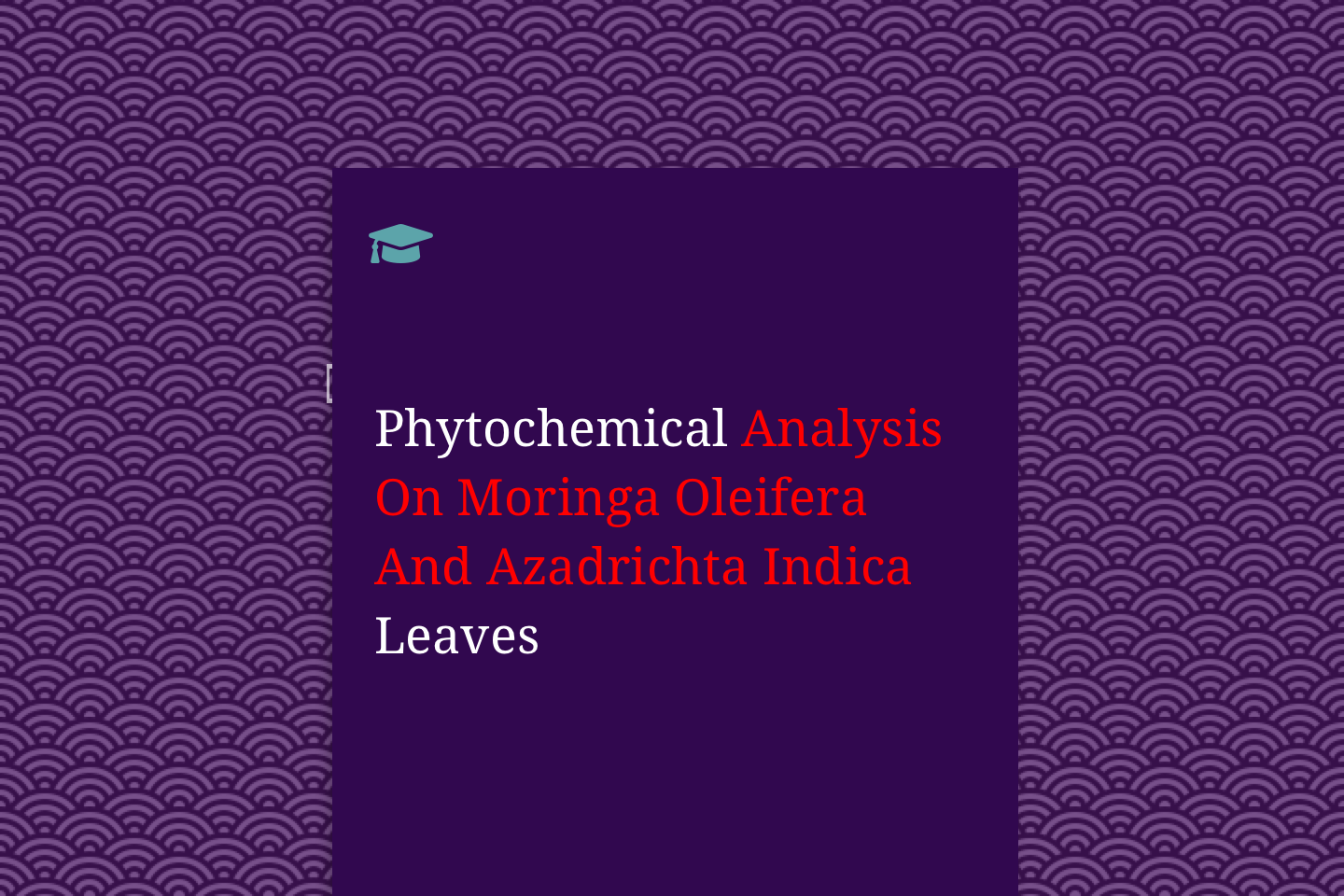 Studies were conducted to determine the phytochemicasl present in moringa olrifera and Azadrichta indica leaves. Leaves for this work were washed, room dried ground to powder. The ground leave for both sample were soaked in four different solvent; Ethanol, n-Hexane, Ethyl acetate and water for 24 hours. After the contact elapsed the solvent were filtered to recover the extract. Qualitative analysis was carried outon the extract; the result showed moringa oliefera to contain saponin, flavonoid, tannin, phenol, steroid and glycoside. Azadrichta indica contains; saponin, flavonoid, tannin, Alkaloid, steroid and glycoside.Quantitative anaylsis were also carried on the extract and the result showed moringa oliefera and Azadrichta indica to contain in percentage flavonoid (21.8 : 23.80), Alkaloids (5.00 : 8.20), saponin ( 0.70 : 1.10 ), phenol ( 0.76 : 1.49 ), Tannin ( 0.08 : 0.57 ) and Glycoside ( 0.005 :0.0062 ) respectively for moringa oliefera and Azadrichta indica. In the qualitative analysis water was the best solvent for extraction and quantitative analysis; flavonoid, alkaloid, tannin, saponin, phenol and
glycoside have higher percentage in Azadrichta indica than moringa oleifera

From time immemorial, man depended on plants as medicine. From a historical perspective, it is evident that the fascination for plants is as old as mankind itself. The plant kingdom represent a rich store house of organic compounds, many of which have been used for medicinal purposes and could serve as lead for the development of novel agents having good efficacy in various pathological disorders in the coming years.Plants are the richest source of drugs for traditional medicine, modern medicines, nutraceuticals food supplements, folk medicine, pharmaceutical intermediates and chemical entities for synthetic drugs (Hammer et al., 1999).

The use of plant product as medicines could be traced as far back as the beginning of human civilization. The earliest mentioned medicinal used plant in Hindu culture is found in “Rigveda”, which is said to have been written between 4500-1600 B.C. and is supposed to be the oldest repository human knowledge. The active principle isolated, have provided leads in the development of several life saving drugs, which are in use today (Rastogi and Mehrotra, 2002). The isolated active compounds of the plants are secondary metabolites chemical compound that occur naturally in plant with no nutritional value to human life. These active compounds are generally called phytochemical. These phytochemicals play protective roles in plants, each chemical labeled phytochemical works in different ways, not all are the same for human, and not all come from the same plants.

Some have shown more promise than others in fighting disease and illness in humans. There are some basic types of these active compounds that are found in different fruits and vegetables. We have some of them like antioxidants, they are present in onions and some other fruits and tea, they act as preventive measure for premature cell death and some forms of cancer and aging. Isoflavones or plant estrogen; they are found in soy and soy products; they are helpful in the year just before and after menopause. Capsaicin is found in hot pepper and it has been shown to significantly reduce prostate tumors in size, at least in mice. Taking capsaicin on a regular basis by eating spicy foods with hot peppers may prove an excellent preventative agent to prostate cancer and benign growth of prostate (Ahmedabad 382- 481). This experiment was carried out on moringaoleifera and Azadirachtaindica leaves. Moringaoleifera, or the horseradish tree, is a small or medium-sized about 10 m high perennial softwood tree with timber of low quality pantropical specie plant that is known by such regional name as benzolive, drumstick tree, kelor, marango, mlonge, mulangay, nebeday saijhan and sajan. Over the past two decades, many reports haveappeared in the mainstream scientific journals describing its nutritional and medicinal properties (Akerele, 1993).Moringaoleifera is the most widely cultivated species of a monogenetic family, the moringaceae that is native to the sub-Himalayan tracts of India, Pakistan Bangladesh and Afghanistan, it also now naturalizes in West Africa and Nigeria as a whole. Azadirachtaindicaon the other hand is a very useful traditional medicinal plant in the sub-continent and each part of the tree has some medicinal properties. The plant is native to Asia, but has now naturalized in West Africa and is widely cultivated in Nigeria as an ornamental as well as medicinal plant.

Phytochemicals are non-nutritive plant chemicals which occur naturally in plants that have protective or disease preventive properties. They are nonessential nutrients, meaning that they are not required by the human body for sustaining life. It is well-known that plant produces these chemicals to protect them but recent research demonstrates that they can also protect humans against diseases. There are more than thousand known phytochemicals. Some of the well-known phytochemicals are lycopene in tomatoes, isoflavonesin soy and flavanoids in fruits.Alkaloids (examples are Caffeine, Theobromine,   Theophylline).Organosulfides(examples are Allicin,Glutathione,Indole3-Carbinol,Isothiocyanates).Tannins, steroids, Glycosides etc.

Antioxidant – Most phytochemicals have antioxidant activity and protect our cells against oxidative damage and reduce the risk of developing certain types of cancer. Phytochemicals with antioxidant activity includes:allyl sulfides (onions, leeks, and garlic), carotenoids (fruits, carrots), flavonoids (fruits, vegetables), polyphenols (tea, grapes). Hormonal action – Isoflavones, found in soy, imitate human estrogens and help to reduce menopausal symptoms and osteoporosis.Stimulation of enzymes – Indoles, which are found in cabbages, stimulate enzymes that make the estrogen less effective and thus couldreduce the risk for breast cancer. Other phytochemicals, which interfere with enzymes, are protease inhibitors (soy and beans),
terpenes (citrus fruits and cherries). Interference with DNA replication – Saponins found in beans interfere with the replication of DNA cell, thereby preventing themultiplication of
cancer cells. Capsaicin, found in hot peppers, protects DNA from carcinogens. Physical action – Some phytochemicals bind physically to cell walls thereby preventing the adhesion of pathogens to human cell walls. Proanthocyanidins are responsible for the anti-adhesion properties of cranberry. Consumption of cranberries will reduce the risk of urinary tract infections and will improve dental health. Phytochemicals are naturally present in many foods but it is expected that through bioengineering new plants will be developed, which will ontain higher levels. This would make it easier to incorporate enough phytochemicals with our food.

Moringaoleifera and Azadirachtaindica are plants(leave) are claimed to have a lot of economic value such as medicinal, nutritional and pesticidal values. These claims have not been clearly justified.This research and experiment is therefore centered on investigating, analyzing and justifying the claims made on these plants (leave). And also to know the chemical composition responsible for the Medicinal value of these plant (leave).

i. Phytochemical anaylsis on the Moringaoleiferaand Azadiractaindica. In the other words, identify, isolate and quantify each phytochemical present in the plant material
ii. To describe clearly the unit operation (Extraction process) used on these plant.

To justify the claims made on these plants for its medicinal and economic values like moringaoleifera is responsible for curing malaria  reducing high blood pressure and reduces blood sugar and
Azadirachtaindica is responsible curing fever,malaria, bacteria and fungi disease.

The phytochemical analysis will be carried out only on the leaves of the plant under study.