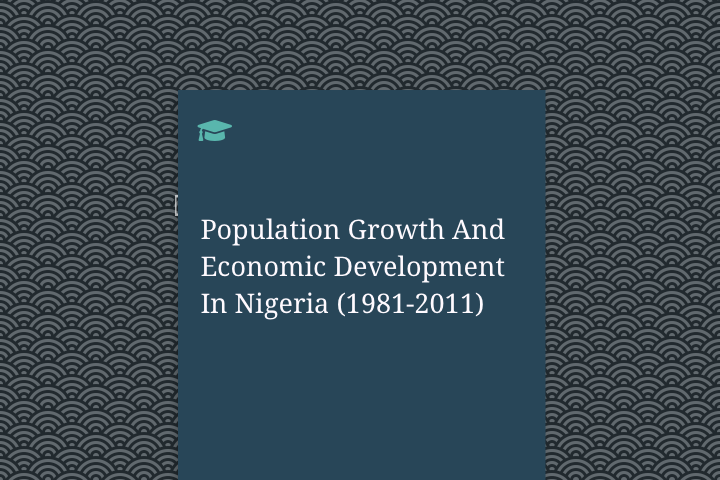 Over the years if has become established that the existence of an efficient human capital is the key to economic growth and development in any nation. This seems from the fact that every other facility and resources required for economic development is driven by the availability of human capital. More so, in the absence of effective human capital development, an increasing population can have adverse negative effect on the economic growth of a nation. This is because a lot more resources are taken out to manage and cater for the teeming population that the same can generate.
It is therefore correct to state that the economic growth of a nation is significantly dependent on the growth of its population. This effect or impact can be either negative or positive depending at the existence of certain factors and conditions, when studied and understood can be managed or controlled to ensure continuous and sustainable economic growth and development. Meier (1984).

Economic development and growth depend on many factors or variables. These variables include variable resources, capital, population and technology.
Development is also dependent on growth. Lipase (1963). People have often said to crucial to the development of every society.

Growth in population is one of the components of economic growth (wish the associated, although delayed increase in the labour force) has traditionally been considered a positive factor in stimulating economic growth and development. Lipase (1963).

The ability for a country to effectively exploit natural resources is dependent on among other things, the managerial and technical skills of its people. It is the people who exploit natural resources, accurate capital and carry out national political organizations and carry out national development programms. Thus, labour is the major contributor to prosperity and growth. Tadaro, (1982).

According to the theory of demographic transition growth occurs only after country would have undergone different levels of population growth to arrive to an optimum wide will naturally lead to growth. A more conventional economic argument is that population growth in many third world countries a region is in-fact desirably to stimulate economic growth and development.
This is not a case in Nigeria; Nigeria is a less developed country and a highly populated one at that, more so her growth rate has always been very low, compared with the increase in population. This features of the nation is an cause for concern.
During the study, it is necessary to state that because development has no unit if measurement and because of lack of reliable date on its components economic growth will be used as a proxy for measuring development. This is because economic growth is the one component from which other components spin off and to which other components are related.

Growth is a complex process as development is a multi dimensional one. The nature and causes of growth go beyond what is expressed by improvement in Gross Domestic Product. Every economics primary objective is to develop in the medium or intermediate, this objective is stated as the need for growth. In the short run it is stated as the need for growth to attain whatever improvement is necessary for growth. In relation to this study the condition necessary for economics development and growth is population growth while growth itself is a condition necessary for development. Population growth is the rate of which a given population multiplies itself.

Economics growth refers to the study process by the productive capacity of the economy is increased overtime to bring about increase in the output of goods and services and rising levels of national income. (Hodder’s (1980).

The growth in the output of goods and services (i.e growth in GDP). It is the process by which national income or output is increased. An economy is said to be growing if there is a sustained increase in the actual output of goods and service per head. Meier GM (1984).The rate of economic growth therefore measures increase in real national income, during a given period of time, usually a year.

Economic development is not the same as economic growth. It means more than mere growth of the economy (in terms of increased output) it is in the process of increasing substantial positive transformation in the various sectors of the economy. Meier GM (1984). The positive changes which take place improve the general rise in the standard of living of the masses with economic development; there are structural transformations in the different sectors of the economy as well as general improvement in different areas of the country, leading to increase economic welfare of the citizens. Economic development on the other hand is generally defined as consisting of “Improvement” in the various aspects of the life of the entire population of a country such improvements are generally manifested in greater numbers of useful tools for employable persons, higher real incomes, better health conditions, (literacy) and better government services.
Given Nigerians economic structure, population and rate of economic expansion, most people have blamed Nigerians low growth and development on a high population that is large and not very productive. Other has opined that the little growth the country has attained is a direct consequence of a large population.
These divergences question the theoretical relationship between populated but not growing but China is highly populated and growing rapidly. Also the growth of population in Western Europe has lead to its rapid industrialization. This study is prompted by the need to understand population growth and economic development in Nigeria.

The Nigeria population has been growing while the rate of economic growth has such little improvement the question on how best to exploit the theoretical relationship between population growth and economic development has persisted for long and it has become necessary to asses the issues. Thus, this scenario prompts us to find out whether the increasing population growth has a positive or negative effect on Nigerians development.

1.6 SIGNIFICANT OF THE STUDY

The importance of the research is to be appreciated by all since concepts of population growth economic growth and development affects everybody irrespective of class, status or occupation.
However, the study will be importance to the following categories of persons.
i. Government (policy makers) The government will benefit from the study since it will provide the basics for making policy changes and formulating future policies. It helps the economy in planning for development.
ii. Students: The study is important to students since it will reveal more details and provide more information for those who are interested in finding out  population trends in Nigeria and its consequences to economic growth in Nigeria and also for further studies.
iii. Research: This study will provide more information for further research about the population trend in Nigeria.

Chronologically the study covers the period of about twenty nine years (1981-2011). The data or any other pieces of information utilized in the conduct of the study will be restricted to those published by national institution to ensure consistency.
The population under study covers an estimate for the entire population of the Nigeria economy.
Geographically the study is restricted to the territory of Nigerians sovereignty. In terms of context, the study scope is primary inclined to macroeconomics is nothing but an aggregate of micro-economics.
During the course of its conduct, this study has been limited or hindered from early completion due to factors such as
i. Financial constraints
ii. Unwillingness of certain institution to provide needed information.
iii. Discrepancies between data from different sources.