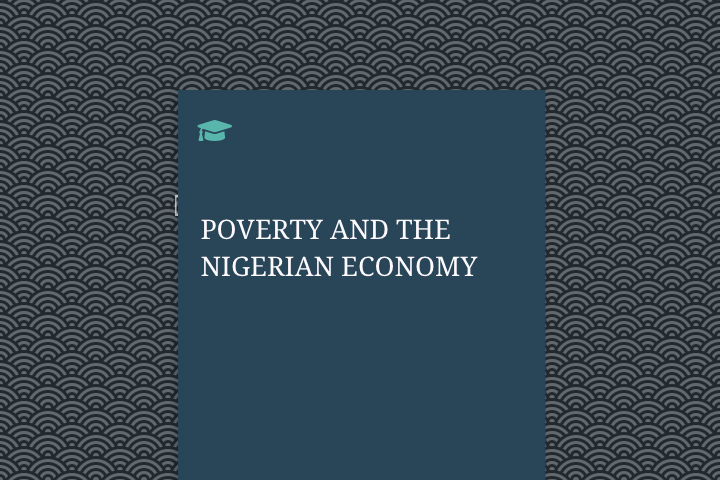 This project research study by means of robust statistical analysis investigated the poverty situation in Nigeria and how it affects the citizens and the economy at large. This research was taken in a period of 25 years which is from 1985 – 2010. The ordinary least square method was used to investigate this work.
The empirical analysis carried out showed that the Nigerian economy has changed from a diversified economy to a mono economy because of the over dependence of the oil sector and this has resulted to the increase of poverty in Nigeria Using the ordinary least square regression we see that there is a positive relationship between the per capital income and the GDP of the country, positive relationship between government expenditure on health and GDP but a negative relationship between government expenditure on education and unemployment and the GDP of the country.
The Nigerian government in curbing this problem of poverty has introduced many poverty alleviation policies and programmes but they have all been a failure because the implementation of these policies did not take into cognizance the masses that they are doing these policies for.

Poverty has many aspects of perception. Some people or most people take poverty as deprivation and deficiency. But poverty is a phenomenon which has historical, social, psychological, cultural and international dimension, these means that poverty’s definition depends on the angle the person looking at it looks at it.

As there are variations in the living standard of people round the world the same way the economic growth rates vary from one nation to another. Some countries are poor; some are fairly well off while others are rich. However as everything is relative so is poverty, what most people in the united states today see as stark poverty would be seen as luxury in some parts of Asia and Africa.The key variables by which the poor can be singled out are: food, income, health, freedom, justice, equity etc. And all these variables mentioned above are the key challenges facing our beloved country Nigeria today. But the key challenge facing Nigeria and other developing countries is how the country can sustainably feed her population and Nigeria’s population is over 140 million people.

Although Nigeria has one of the world’s biggest economic growth rate ( averaging 7.4% over the last decade) and also blessed with plenty of natural resources such as oil, but still it retains a high level of poverty with 63% living below $1 daily. When one talks about poverty in Nigeria it knows no bound as it is visible in all aspects and segments of the society. Poverty is not just limited in the rural areas it is also evident in the urban areas slums in the country.

As said earlier poverty is relative and also physical. It is physical because one can note its effects on the people that are affected by poverty and it is relative because what is regarded as poverty in some nations can be seen in other nations as luxury.

The poor are those that have limited and insufficient food, poor clothing, live in crowded and dirty shelter (Galbraith 1995), cannot afford medical care and recreations, cannot meet family and community obligations and other necessities of life. When we come home there is no precise definition or explanation needed for an individual to know what poverty is, as many people cannot afford decent food ,medical care, recreation, decent shelter and clothing meet up with family obligations etc, no wonder poverty is regarded as a form of oppression (UNDP conference Report,15-17 March 2011).

Poverty means more than been impoverished and more than just lacking financial means, it is an overall condition of inadequacy, lack and scarcity, deficiency of economic, political and social resources. These are a broader perspective of poverty which reflects its true dimensions. Therefore someone can be said to be in poverty if the person’s income and resources (material, cultural and social) are so inadequate as to exclude them from having a standard of living which is regarded as acceptable by the society generally.

Poverty is not a respecter of creed, race or educated and uneducated, it affects all when it strikes. Nigeria is a country that enjoys the bountiful environment of nature and yet cannot appropriate the natural resources to its advantage. It is greatly ironic that at the last two decades Nigeria has received over $300 billion on oil and gas revenue and at the same time the population of the critically poor has been doubled. Nigeria has been described as a paradox by the World Bank (1996) in the sense that the poverty level in Nigeria contradicts the country’s immense wealth. Nigeria retrogressed into been one of the 25 poorest countries at the threshold of the 21st century whereas she was among the richest 50 in the early 1970s.

The big question is what are the causes of this poverty despite the country’s immense wealth and natural resources? The shift in emphasis from agriculture to oil exploration in the early 70’s is one of the causes. These shift transformed the country’s economy to a mono economy making us to abandon other sectors that give us revenue like agriculture. The fact that the resources generated by oil are not been invested in the non oil part of the economy of which 90% of Nigerians depend on for their livelihood is another issue. It has been estimated that more than 80% of all poor live in the rural areas of which 92% of them live in absolute poverty. And these poor people in the rural areas are mostly into our abandoned agriculture, they are usually small scaled.

Many administrations have tried eradicating poverty in the wrong way, most administration think that by enhancing growth and development of the cities that it would subsequently promote the development of the rural communities by way of “trickledown effect’’ but these rather created a wide gap between the people in the cities and those in the villages. The villages became disadvantaged, isolated, dull as the youth and able bodied men left the village to escape the rural drudgery and also search for white collar jobs.

The problem of poverty in Nigeria is not to be entirely blamed on lack of sufficient resources but also on the allocation and management of these resources that are available for use.

Despite the fact that monetary measures is simple studies have shown that these measures are deficient (Revallion 1996). Revallion argues that poverty is multi faceted; therefore multi indicators are necessary including measures of real expenditure per adult access to non market goods like health and education. Hence for effective poverty measurement there is needed to go beyond money metric measures. It is necessary to employ multi dimensional approach in which expenditure on market goods is placed side by side with “non income goods’’ and indicators of intra household distribution. These will help us to understand the causes of poverty more so that better policies that can fight poverty can be formulated.

The objectives of the study are to evaluate the performances of the Nigerian economy. Specifically the study tends to examine

 How the Nigerian economy had fared in the poverty trend

 The effect of poverty on output.

The study attempts to put together the poverty cases in the Nigeria economy and its effects on the people. This study should serve as a document for those with power strong enough to influence anti – poverty policies. It should be regarded as a guide to policy matters in our country Nigeria and other third world countries.