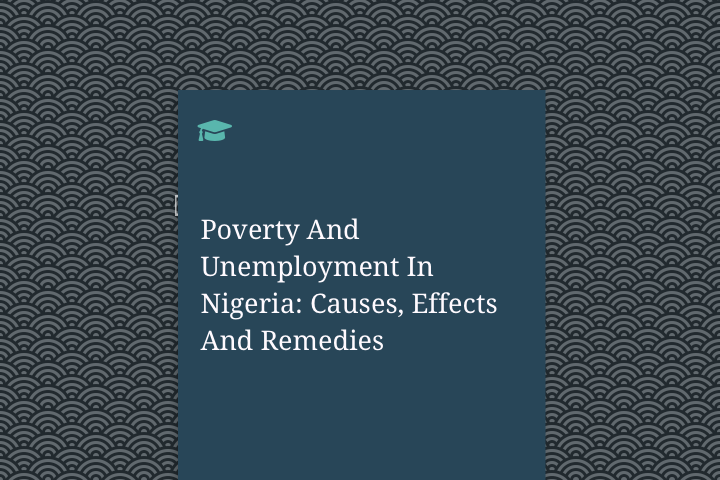 Poverty and unemployment an identical bane is a global trend which affects people in various depths and levels at different times and phases of existence. The extent of association between poverty and in unemployment in the developing countries is often a subject of considerable debate. There is actually no nation that is absolutely free from poverty and unemployment. The major difference is the degree and pervasiveness of this similar blight.

Nigeria is the most populous country in Africa and the eight in the world with a population of 140 million by 2006 census with a nominal GDP of $207. Billion per capita income of $1401 it has tyrants. As a result second largest economy in Africa (salami 2002). As impressive as the above figures may appear youth unemployment has been one of the major problems facing Nigeria. A high level of un and underemployment is one of the critical socio-economic problems facing Nigeria. While the labor force with an increasing proportion of youth employment opportunities is inadequate to absorb labor market entrants. As a result, youth are especially affected by unemployment. Moreover, young people are more likely to be employed in jobs of low quality. Underemployed working long hours for low wages, engaged in dangerous work or receive only short term and/or informal employment arrangements. The inadequate employment situation of youth has a number of socio-economic, political and moral consequences. This has resulted in poverty in Nigeria which is chronic and rising. The share of the total population living below the$1 (one dollar) a day threshold of 46 percent is higher today than in 1980‟s and 1990‟s, this despite significance improvements in the growth of GDP in recent years

Unemployment and poverty are so intertwine that one can easily confuse one for the other. Although, it is possible for one to be employed and still remain poor, this is to be a case of underemployment. Unemployment and underemployment reflect the failure to make use of an important factor of production, labor, for fostering economic growth in Nigeria. Low returns to labor as well as high unemployment indicates poverty. Poverty makes it difficult to make investments in education and health that would increase ones productivity. The social aspects of the problem that lies in association of unemployment with social exclusion and a sense of hopelessness. Structural unemployment and wide spread poverty are believed to be the basis for the activities of miscreants such as militant youth in the Niger Delta and the present deadly Boko Haram in northern Nigeria upsetting the seemingly peaceful and stable political situation . The activity of BokoHaram has resulted in many deaths and destruction of property worth millions of dollars.

Unemployment in Nigeria is defined as the proportion of labor force that was available for work but do not work. In the week preceding the survey period for at least 39 hours. Official figures from the bureau of statistics puts the figure of unemployed at 19.70 per cent about 30 million but this figure still did not include about 40 million others captures in world bank statistics in 2009. By implication it means that if Nigerians population is about 140million then% Nigerians are un employed (Njoku and Okezie 2011) from this perspective of the recent events in the middle east and north where unemployment and poverty among others played a key role in the uprising one can only conclude that Nigeria‟s unemployment and high poverty level poses even greater threat to its development, security and peaceful co-existence it is in light of proffering solutions to the problem of poverty and unemployment that the current study is germane

The world bank and United Nations Development programme (UNDP) 2002,Human Development Index (HDI) which looks beyond GDP to a broader definition of wellbeing of 0.461 aptly indicates the nations development. Over the years successive government have adopted various policies and programmes to deal with the problem of poverty and unemployment in the country.

Human poverty is more than income poverty, it is the denial of choices and opportunities for living a tolerable life (United Nations 1997) poverty amid plenty id challenge.

On the other hand, unemployment is one of the developmental problems that face every developing economy in the 21st century. International statistics show that industrial and service workers living in developing regions account for about some percentage of the unemployed (Patterson et al 2006).

Though Nigeria recorded 7.5 percent expansion in 2012 that was faster than the global and regional average in 20011 this growth which did not impact positively in the eyes if majority, might have neither improve the employment rate and living standards of Nigeria in 2012. Recent data from the National Bureau of Statistics placed the country‟s misery index at 34% a development which analyst described as horrible and terrifying. According to the Bureau the figure of unemployed Nigerians in the first half of 2011 was 23.9% from 21.1% in 2010 and 19.7% in 2009. This showing that the rise in unemployment is bound to worsen as the year goes by.

and unemployment and determine the causes effects and remedies in Nigeria

The specific objectives of the study therefore include the following

a) To examine the relationship between poverty and unemployment

b) To examine the impact of poverty and unemployment on economic growth and development if a nation.

c) To identify and analyze the major causes of poverty and unemployment in Nigeria.

d) To provide workable recommendations that can be useful to assist the reduction and elimination of poverty and in employment by policy makers.

In Nigeria poverty and unemployment is really assuming a crisis level. Therefore the study will be relevant in that

I. It will provide an insight into the relevant literature

II. It will help to lay a bare the causes and effects of poverty and unemployment in Nigeria

III. It will help the general populaces to appreciate the fact that poverty and unemployment is twin scourge that need to be faced in order to achieve economic growth and development.

IV. It is expected that through the findings and subsequent recommendations of this study, poverty and unemployment will be reduces or eradicated.

V. Finally it is the opinion of the researcher because it will serve as a spring board for further research

The period of this study for the time series analysis is 20years.

There is no significant relationship between poverty and unemployment in Nigeria

There is significant relationship between poverty and unemployment in Nigeria

A study of this nature cannot be completed without the researcher experiencing some constrains. The first major limitation of the study experienced by researcher was lack of time. This is due to the fact that both academic course work and the study were talking place simultaneously.

Another limitation encountered by the researcher was the lack of sufficient data particularly on poverty which greatly affected the study in terms of carrying out a direct and detailed econometric analysis on the variables.

Finally for an in-depth work to be carried out in this study, the sourcing of data was not easy.

POVERTY: – This is a living condition in which an individual‟s unable to take care of his basic needs like clothing, food, shelter, inability to meet social and economic obligations, lack of gainful employment and other environmental opportunities at his disposal.

UNEMPLOYMENT: – This is a situation where by one is able and willing to work at a prevailing wage rate but does not have work.

POVERTY RATE: – This is the percentage of a nations population with income below the poverty line.

POVERTY LINE: – This is the value of basic necessities considered essential for melting the minimum socially acceptable standard of living in the society.

UNEMPLOYMENT RATE: – This is the percentage of labor force without jobs but is willing and available for work.

NATIONAL INCOME: – This is the total amount of income given to a country from economic activities usually in a given year or the total value of goods and services produced annually in a country.

PER-CAPITA INCOME:- This is the average income of the people of a country in a particular year. It is obtained by diving the national income of a country by its population

ECONOMIC DEVELOPMENT:- This refers to the concentrated actions of policy makers and communities that promote the standard of living and economic health of a specific area. It can also be referred to as the qualitative and quantitative changes in the economy.