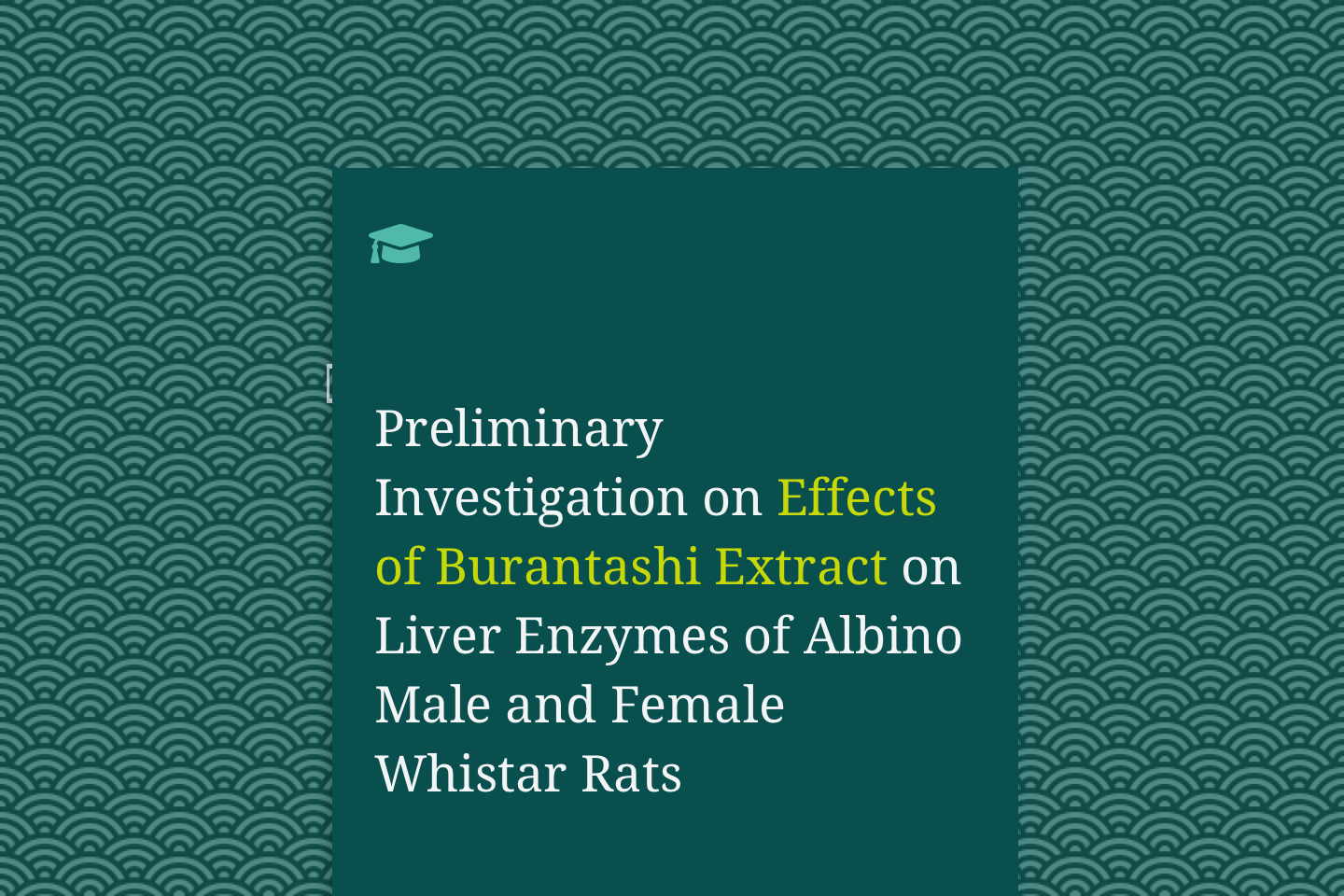 This work was carried out to investigate the effects of Burantashi extract on liver enzymes of albino male and female whistar rats. Burantashi is a popular seasoning agent to barbecued meat (suya) in Nigeria,mostly found in the northern part of the Nigeria. Liver Enzymes are those enzymes that plays important role in the liver both in function and regulation. Erectile dysfunction (ED) is defined as the consistent or recurrent inability of a man to attain or maintain penile erection, sufficient for sexual activity (2nd) International consultation on sexual Dysfunction Paris, June 28th July 1st, 2003). Following the discovery and introduction of Burantashi research on the mechanism underlying penile erection, has had an enormous boost and many preclinical and clinical papers have been published in the last five years on the peripheral regulation of, and the mediators involved in human penile erection. The most widely accepted risk factors for ED are discussed. The research is focused on human data and the safety and effectiveness of Burantasni Stem as a phosphodiesterase -5- Inhibitors (PDE-5) used to treat Erectile Dysfunctions.

Penile Erection involves an integration of complex physiological processes involving the central nervous system, peripheral nervous system, hormonal and vascular systems. Any abnormality involving these systems whether from medications or disease has a significant impact on the ability to develop and sustain erection; ejaculate and experience orgasm. (Laumann et al., 1999).
The physiological process of erection begins in the brain and involves the nervous and vascular system. The chemicals that initiate erection are neurotransmitters present in the brain. Any kind of stimulation physical or psychological, causes nerves to send message to the vascular system which result in significant blood flow to the penis. Two arteries in the penis supply blood to erectile tissues and the corpora cavernous which become engorged and expand as a result of increased blood flow and pressures. Because blood must stay in the penis to maintain rigidity. An erectile tissue is enclosed by tunicae, which is fibrous elastic sheathes cinch which prevents blood leaving he penis during electron. When muscle in the penis contract to stop the inflow of blood and open out flow channels and an electron is reserved.

Oestrogen/Progesterone: (These are female hormones that cause clitoral erection. If the body has two much oestrogen and or too little testost erone, she can get very wet but can not erect her clitoral and G-spot. ( Haimen et al., 2002). Estrogen tends to increase the size of the bread, labia minors (inner lips) and clitoral hood, but shrinks the glans clitoris into the clitoral hood making it invisible. It also increases the thickness of the vaginal lining making the G-spot inaccessible. The mechanism of the clitoral and G-spot erection is the same as that of the penis. It is driven by the parasympathetic sexual nerve (The neurotransmitter acetylcholine) through the neurotransmitter. Nitric oxide and the erection dilator cGMP, which is continuously powered by the burning of testosterone without a testosterone burst and burning. She cannot pop the glans Clitoris and G-spot out. If she is on birth control pills there is a chance that her body is over flooded by estrogens and low progesterone. Over loaded liver cannot produce sufficient essential enzymes to synthesize sufficient NO, cGMP and testosterone to support the clitoral and G-spot erection infact excessive estrogen or progesterone in the body will shrink the penis, clitoral and G-spot, but likely increase the breast size (under the excessive estrogen action).
Testosterone:- Testosterone is a hormone produced by the testicles and is responsible for the proper development of male sexual characters. The pump helps the penis to become erect while band maintains the erection.
Circulating levels of testosterone correlate with NO, production. Testosterone treatment can reduce central adiposity and insulin resistance, which may contribute to its beneficial effects on vascular NO, and ED. Raising low testosterone levels improves ED and can restore erectile function in response to PDE-5 inhibitors.

MECHANISM OF ACTION OF PDE-5 INHIBITION IN ERECTILE DYSFUNCTION.

A spinal reflex and the L-arginine nitric oxide guanglyl cyclase-cyclic guanosine monophonsphate (cGMP) pathway mediate smooth muscle relaxation that results in penile erection. Nerves and endothelial cells directly release nitric oxide in the penis, where it stimulates guanylyl cyclase to produce cGMP and lowers intracellular calcium level. This triggers relaxation of arterial and trabecular smooth muscle, leading to arterial dilation, venous constriction, and erection. Phosphodiesterases (PDEs) is the predominant phosphodiesterase in the corpus cavernosum. The catalytic site of PDE-5 normally degrades cGMP and PDE-5 inhibitors such as sildenafil potentiate endogenous increase in cGMP by inhibiting its breakdown at the catalytic site. Phosphorylation of PDE-5 increases its enzymatic activity as well as the affinity of its allosteric (noncatalytic/GAF domains) sites for cGMP. Binding of cGMP to the allosteric site further stimulates enzymatic activity. Thus phosphorlation of PDE-5 and binding of cGMP to the non catalytic site mediate negative feed back regulation of the cGMP pathway.
In recent years a deeper understanding of the regulation of penile smooth muscle has led to greater insight into the physiology of normal erectile function and erectile dysfunction (ED), as well as the introduction of phosphodiesterase (PDE) inhibitor for the treatment of ED. The oral PDE-5 inhibitors sidenafil has proved to be a safe and effective treatment for this disorder and has fostered further research into the underlying mechanisms of such drugs. This article will review the biochemical pathways involved in erection. The role of PDE-5 in these pathway and the molecular mechanisms involved in PDE activity.
A penile erection result from the relaxation of smooth muscle in the penis .the process is mediated by a spinal reflex and incorporates sensory and mental stimuli. The Balance between factors that stimulate contraction and relaxation determines the tone of penile vasculature and the smooth muscle of the corpus cavernosum.
In primates, including humans the L-arginine nitric oxide guanylyl cyclase cyclic guanosine monophosphate (cGMP) pathway is the key mechanism of penile erection. Nitric oxide is produced from oxygen and L-arginine under the control of nitric oxide synthase (NOS). Sexual arousal stimulates neural pathways that result in the release of NO from nerves and endothelial cells directly into the penis. NO penetrates into the cytoplasm of smooth muscle cells and binds to guanylyl cyclase. The interaction of NO with guanylyl cyclase causes a conformational change in the enzyme, which results in the catalytic production of 3,5 cyclic guanosine monophosphate from guanosine 5’triphosphate. Cyclic cGMP activities cGMP dependent protein kinase (PKG) which in turn phosphorylates several proteins. These protein kinase interactions results in reduced intraocular calcium levels and a consequent relaxation of arterial and trabecular smooth muscle leading to arterial dilation. Venous constriction and the rigidity of penile erection.
Since cGMP plays a key role in this process, potential interventions for inadequate smooth muscle relaxation include increasing the level of intracellular cGMP. PDE-5 normally inhibits penile erection by degrading cGMP. This degradation occurs at the catalytic site in the presence of bound zinc. PDE-5 inhibitors lower the activity of PDE-5 by competing with cGMP and consequently raise the level of cGMP. In the absence of stimulation of the
NO pathway. PDE-5 inhibition is ineffective in isolated strips of corpus c avernosum, sildenafil relaxes the smooth muscle by amplifying the effects of the normal, endogenous cGMP- dependent relaxation mechanisms but produces little effect in the absence of a NO donor. Since sexual arousal stimulates this pathway specifically in the penis, PDE-5 inhibitor has a relatively small effect on smooth muscle in other tissues.
PDE-5 is the predominant phosphodiesterase in the corpus carvernosum, however, at least 11 families of PDE have been identified in mammals, some PDE types are associated with more than one gene and some mRNA exhibit two or more splice variants. The result is more than 50 species of PDE. Some types of PDE are specific for either cyclic adenosine monophosphate (cGMP) or cGMP, and some degrade both PDE, for example degrades both cGMP and cGMP. Whereas PDE-4 is specific for Camp-5 and PDE-5 is specific for cGMP. The cross reactivity of PDE inhibitors can be attributed largely to similarities of their homologous catalytic domain. Messager RNA has been detected in human corpus cavernosum tissue for the human PDE isoforms-PDE-1A, PDE-1B, PDE-1C, PDE-2A, PDE-3A, PDE-4A, PDE-4B, PDE-4C, PDE-4D, PDE-5A, PDE-7A, PDE-8A, and PDE-9A. Most mammalian PDEs are dimers but the functional significance of this dimerization is unknown, some like PDE5, have two identical submits (homodimers) and some like PDE-6 have two different submits (heterodimers).
The PDE-5 also differs in the nature of the regulatory domain of the enzyme and in the role of phosphorylation. In all cases, the catalytic domain is located towards the carboxylterminus and the regulatory domain is located towards the amino terminus. A PDE-5 monomeric fragment retains the essential catalytic features of the domain full length enzyme.