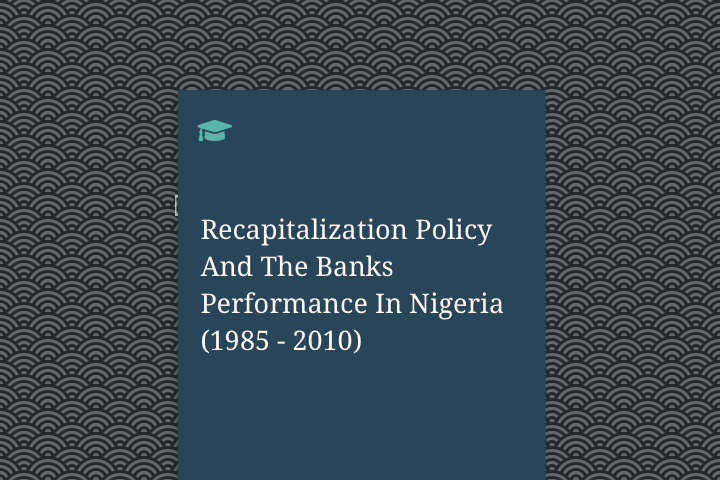 1.1 Background of the study

The financial sector is one of the dominant economic sectors in Nigeria. Banks are key players in any country’s financial sectors; they occupy a delicate position in the economic equation of any country such that their (good or bad) performance invariably affects the economy of the country (Wilson 2006). Studies here shown that the banking sector which actually started in Nigeria in 1892 (Nwankwo 1980) has been largely volatile within spates of banking failure experienced in most parts of the 1990s and in the early and mid 2000s.

The strategy often utilized to strengthen banks in Nigeria and save them from financial distress is capital regulation by the central bank of Nigeria (CBN). A cursory look at the history of banking in Nigeria reveals that the CBN has found reason to share up the capital base of Nigeria bank, a number of times since 1980s from a modest value of N10million naira minimum paid up capital in 1988, Nigerian. Commercial banks were required to maintain capita not below N50million in 1991. Between 1991 and 2005 subsequent increase have also been made ranging from N50million in 1997 N1billion 2001; N2billion in 2002 to N25billion in 2005 (Onaolapo 2006) within 18months and also to consolidate the banking institution through merger and acquisitions before 31 December 2005.

This was an effect to instill discipline into the financial system and to reposition Nigerian banks for global integration the governor of the CBN Charles Soludo (Prof.) on 6th July 2004 presented the 13point reform agenda at a special meeting of the bankers committee in Abuja on this new bank reforms.
The agenda was envisaged to facilitate greater mobilization of resources and improvement in financial intermediation, deepen and widen the capital and money markets and ultimately stimulate development of the private sector.

Prior to the banking sector reforms of 2004 there were 89banks with about 3,300 branches as at July 31st, 2004. The 89banks had a total asset of US and 18.0billion (Bullion CBN vol.30 No, 2). This was in sharp contrast to South Africa for example, where only 8banks had assets worth more than all 89banks in Nigeria put together. The reform of the Nigerian banking industry is therefore aimed at strengthening the banking system and refocusing it to play its intermediation role more effectively.

The frequent interruptions by the government reversal of policies, weak government appointed staff poor and minimal supervision and monitoring of financial reporting and other short comings worsened the banking sector problems and its performance. The Nigerian banking system has therefore just been re- energized through the recapitalization policy and other measure such as bank consolidation as a means of reducing the effects of any crisis that may arise from future failure. The exercise witnessed mergers and acquisitions by some banks. This is expected to pose some problems to these banks.

The challenges which have come about as a result of the recapitalization policy has to be mitigated to enable us realize the maximum bank performance in Nigeria. The Nigeria banking sector must therefore be evaluated and re-energized to face these challenges. The study therefore seeks to examine the recapitalization policy and bank performance in Nigeria.

Specifically the study seeks to provide answers to the following questions;

The objective of the study is to critically examine the recapitalization policy and bank performance in Nigeria. The specific objectives are to;

Experience has shown that the performance of the Nigeria banking industry is regarded as awkward due to low capital base, inadequate financing insider abuse by directors, weak government appointed staff, poor supervision and monitoring of financial reporting and so on. Hence, the study would be relevant for the recapitalization assessment of bank performance in Nigeria.

It is hoped that the finding would earn our Nigerian banks public confidence, ensure higher returns on investment in the industry and compete favorably in the study will contribute to the already existing body of knowledge and stimulate further more on banking recapitalization its activities and its performance in Nigeria economy.

1.5 STATEMENT OF THE RESEARCH HYPOTHESIS

However for the purpose of this study to set of hypothesis will be used. These are signified by the symbols H0 for null hypothesis and H1 for alternative hypothesis

This study focuses on the banking reform and its performance that took place between 1985 and 2010. The limitation of the study is the rarity of published materials on the subject matter. The reform is quite new and researches on the subjects are ongoing, also time pose as a limitation to this research.

However, these limitations do not affect the validity of the research findings as the available data were very enriching.